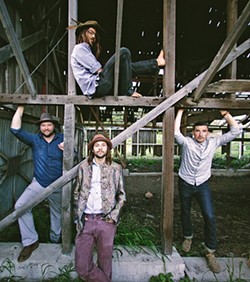 A song like “Little Green Lighter” epitomizes their aesthetics. It begins with a Beach Boys-esque a cappella three-part harmony intro: “Little, little, little green lighter, it’s gone forever, gone forever. Little, little, little green lighter, it’s gone forever, gone forever.” Then it breaks into a bluegrassy novelty song: “Green lighter, green lighter where did you go? You fell out of my pocket into my friend’s pocket. I lent him my lighter so he could smoke a bowl, but when he got done his little hands got cold so he put them in his pocket and walked on down the road. Now my buzz is gone and I just want to smoke a bowl.” After a repeat of the a cappella opening, the song continues: “Now I’m stuck without a lighter and I don’t know what to do. I’d go down to the corner store but I lost my car keys too. My stove runs on electric so I can’t catch a flame. I’d go and ask my neighbor but he’s straight edge and he’s lame. So I went into my closet and was looking for a match, opened up a box and found a magnifying glass. Went over to the window and held it to the light. God shown his grace upon thine bowl. It started to ignite.” It’s an epic tale of stoner ingenuity and determination that would be right at home at a backyard hootenanny.

Curcio, the former frontman for Still Time, has always been front and center, but on this go-around, he’s really collaborated with his band members, bringing a lot more texture to the Moonshiner Collective sound.

“I love the variety,” Curcio said over a beer, “and the Cimo brothers are great at harmony.”

The Cimo brothers (pronounced chee-moe) are clearly bringing their own sounds and interests to the collaboration, and the mix of acoustic instruments and keys and synth is unique and interesting.

Though Ryan House provided drums on the album, the band will be touring with Lance Iunker, a severely wounded Iraq War vet who spent 10 months in the hospital and is now dedicated to helping vets wrestling with PTSD through Operation Headstrong, which uses alternatives to prescription medications.

“Music is a great outlet for him,” Curcio explained.

As for the songs, they’re fantastic and quickly grow on you. “Tall Trees” could easily be a Devil Makes Three song. The opening of “Movin’ On” takes a nod from Steve Miller’s “Space Cowboy.” The band also offers a new version of “Autumness,” which appeared on Let Go, Moonshiner’s last album, and was used in a “Visit San Luis Obispo” YouTube video that’s been viewed nearly 20,000 times. If you haven’t seen it, check it out!

Curcio says the band is moving toward what the Cimo brothers call Ameritronica, a new kind of alt-folk: “Vince runs the command center with keys, slides, knobs, and all that shit,” and though Curcio “hates electronica,” what they’re doing is a whole other animal.

This Friday, April 22, Numbskull and Good Medicine Presents host Moonshiner Collective and Dustbowl Revival at the Fremont Theatre (7 p.m. doors, all ages; $16.50 Presale at Boo Boo’s and ticketfly.com or $20 at the door) with The T Sisters opening.

“I’d like to go on record that Dustbowl Revival is one of the best shows I’ve ever seen,” Curcio added.

I have a feeling this is going to be epic!

Also this week thanks to Numbskull and Good Medicine Presents, check out Royal Jelly Jive on Friday, April 22, at Tooth & Nail Winery (5 p.m.; free). They offer “an intoxicating mixed drink of Gypsy Rock and Soul Jive [that] dives deep head-first into the old-school throwback sounds of the 1940s with a groovy new twist,” according to press materials. “Rapturous horns, sleek bass, elegant keys, and swingin’ cymbals are just some of the sweet tastes you may devour if you’re lucky enough to catch them. All fronted by the sultry and soulful vocals of Lauren Bjelde, this band will have you stompin’ your feet with crooked delight until the moon comes back up again.”

Metal heads unit this Saturday, April 23, when Y&T plays the Fremont Theatre (7 p.m. doors; all ages; $23 presale at ticketfly.com or $25 at the door). Formed in the early ’70s, Y&T opened the door for the likes of Mötley Crüe, RATT, and Metallica. In 2010, the band recorded their first studio album in 13 years with original members Dave Meniketti and Phil Kennemore, and longtime members John Nymann on guitar and Mike Vanderhule on drums. Let the head banging commence!

The Mattson 2 is dripping with cool, as if surfer Mickey “The Cat” Dora and West Coast jazz icon Chet Baker had babies and named them Jonathan and Jared Mattson, twin musicians who will play a fundraising concert for the Cambria Education Foundation on Saturday, April 23, at the Hearst Ranch Warehouse in San Simeon (doors at 5 p.m.; 21-and-older; $35 tickets at cambriaeducationfoundation.org).

The surf-jazz duo describes their sound as “capturing the jangle of the sea and the jazz of the surf in their original tunes. Jared plays the guitar with a style that is heavily influenced by Pat Metheny and Bill Frisell as well as Johnny Marr of the British pop-band The Smiths. On the drums, Jonathan follows with what he describes as a twin intuition that keeps both musicians connected during performances with an improvisational style likened to musical mind-reading.”

The brothers recently released their sixth album earlier this month, and though they enjoy international acclaim, they haven’t forgotten their middle school and high school music teachers who supported and inspired them.

“I believe getting into music at a young age helps kids feel like they have meaning and purpose,” Jonathan said. “Learning an instrument helps children form an independence and an identity in the world in general—not just in creative circles. The confidence, contentment, and self-esteem a student gains from developing musical talents can help combat negative traits all too common in youth.”

Listen to some great music, enjoy beer and wine that will be available for purchase, dig the views, and support Cambria education! 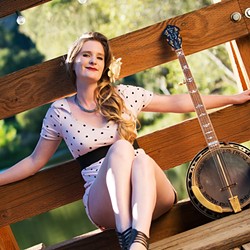 The 26th Annual Earth Day Fair & Music Festival returns to El Chorro Regional Park this Sunday, April 24, from 10 a.m. to 5 p.m. (free; all ages; free bus rides from the Downtown Transit Center or park at Cuesta College and walk or take the tram).

There are always plenty of displays, vendors, activities, and more, but this is a music column, after all, so let’s talk about this year’s lineup! Two inveterate local performers—expert luthier and guitarist Peter Yelda and cellist Bob Liepman—play from 10:10 a.m. to 10:50 a.m., setting the mood with some beautiful sounds.

Hip-hop environmentalist Mr. Eco will drop his conservation-centered verses on the crowd from 11 to 11:20 a.m., wearing his super awesome superhero outfit.

Local classic rock and Chicago-style blues act Cocktail Shorty will heat things up from 12:15 to 1:15 p.m., with Denny Carvalho on vocals, Dave Wilson on lead guitar, Robin White on vocals and bass, and Tim Tucker on drums. 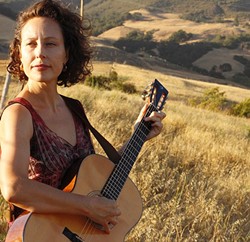 Master percussionist Tim Costa will lead his drum class through its paces from 1:25 to 1:45 p.m., delivering Afro-Cuban rhythms to the crowd.

African and Latin rhythm act Mama Tumba will close out the festival with a set from 3:30 to 5 p.m. According to their bio, “’Unity in diversity is a conscious theme they share. Mama Tumba is not just another dance band, but a complete multicultural show that embraces the oneness of all.”

Anthony Presti plays Linnaea’s Café this Friday, April 22 (8 p.m.; all ages; free), as part of his “From the Bay to LA” Tour. The former grunge rocker turned acoustic singer-songwriter released his sophomore album last year, and notes that it’s “full of variety and inspiration from all over the musical spectrum.” 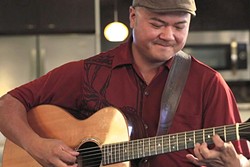 The Black Tuesday Jazz Band and the Cabrillo High School Jazz Band play this Sunday, April 24, at the next Basin Street Regulars hot jazz concert starting at 11 a.m. in the Pismo Beach Vets Hall. Whether you want to listen or dance, these high-energy bands will provide the sounds.

Miss Massive Snowflake plays the Frog and Peach on Tuesday, April 26 (10 p.m.; 21-and-older; free). Fronted by the 6-foot-5 Shane DeLeon, the band has performed around the world. “You have to be fearless and open and accept people who are different from you on an equal level,” he said. “When I travel abroad, I like to think of myself as an ambassador of peace. I want to show the world that Americans aren’t just assholes and consumers.”