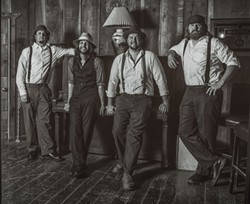 After spending 23 years observing the local music scene, I can say in all honesty that things wax and wane. Sometimes there are scant local bands worth seeing, and other times there’s a glut of creative excellence. This Friday, Jan. 10, will provide evidence that the local music scene is in the middle of an upswing when Moonshiner Collective, Próxima Parada, and the Julian Temple Band play SLO Brew (7:30 p.m.; 21 and older; $12 presale or $15 at the door).

Moonshiner frontman Dan Curcio has deep roots in the community, having started his first band—Longview—while living in the Cal Poly dorms. The band morphed into The New Longview, then Still Time, and they toured the country a couple of times, sold out SLO Brew more than 20 times, and were named Best Band four years in a row in the New Times Best Of readers’ poll before disbanding and allowing Dan to explore a solo career as Moonshiner.

“This is the first show for Moonshiner Collective as a four-piece, and the music is an energetic and diverse mix of indie folk rock in the vein of Avett Brothers, Mumford and Sons, Ben Harper, and Ray Lamontagne,” said Dan, who’s been working toward finding the right fit for a band that could have a similar positive energy and message as Still Time, but do it in a new and sustainable way.

“I feel like I’ve been playing music with these guys for decades, and it’s really only been a few months with Zac and Matt and a year with Nathan. The chemistry we have so far has been pretty incredible. With Still Time, the live show aspect I’ve missed most were the times near the end of some of our shows where we’d hit this kind of transcendent moment where the crowd and the band seem to have this shared euphoric escape that, to me, the best live music is all about. That’s something I know this band has the ability to do, and it’s time to start this Friday evening,” added Dan. “The new full band is primarily focused on Moonshiner Collective songs but will also be bringing the Still Time songs back to life. For fans of Still Time who liked the music and interaction at live shows, we’ll be keeping that spirit alive, and I’m really excited to get back to that level of energy onstage.”

You can listen to Moonshiner Collective’s new album at moonshinercollective.com as well as their new music video for the title track of their album Let Go.

Próxima Parada means “next stop” in Spanish, but once you hop on the Próxima Parada bandwagon, you’re not going to want to get off. The artsy quartet blends rock, jazz, bluegrass, and Americana into an infectious sound. They’ve got a truly original sound.

The Julian Temple Band formed in New Zealand but is fronted by Cayucos native Julian Temple, and their bluesy, rockin’ sound is edgy in a tongue-in-cheek kind of way. By the way, they’re blitzkrieging the Central Coast this month with performances all over: Jan. 11 at The Wise Owl; Jan. 12 at Sculpterra; Jan. 13 at Bon Temps; Jan. 16 at Shell Café and Luna Red; Jan. 19 at Full Moon Tasting Room; Jan. 29 at Boo Boo Records; Jan. 30 at Frog and Peach; Jan. 31 at Paso Robles Brewing Co.; and Feb. 1 at BarrelHouse Brewing Co., all in support of their album Upsidedownbackwards. Get ’em while they’re hot!
This ought to be a great night of top-tier local music!

More great local music awaits on Sunday, Jan. 12 when Santa Maria pop punk act Some Might Say releases their a new album in a four-band show with supporting acts The Goodnight, We Were Superheroes, and Bears Among Men (7:30 p.m.; all ages; $6 presale or $8 at the door).

On Tuesday, Jan. 14, check out the new female face of hip-hop when Baltimore-based Rye Rye plays the brew with supporting acts Blake Lewis, Eryn Woods, Lakeview Drive, and D Woods (8 p.m.; all ages; $15 presale or $17 at
the door). 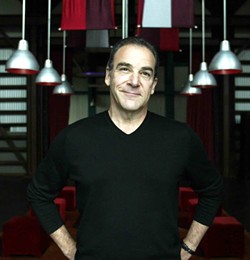 For me, Broadway song and dance man and Hollywood legend Mandy Patinkin will always be Inigo Montoya, the swordsman from The Princess Bride who’s constantly in search of the six-fingered man who killed his father, but Patinkin has been in everything from Yentl to Ragtime to Dick Tracy to his current excellent Showtime drama series Homeland, where he plays CIA chief Saul Perenson. He’s also got three new films coming out: actor-director Zack Braff’s Wish I Was Here that has completed filming; director Fisher Stevens’ American Pastoral that is currently filming with Patinkin in the lead role; and director Barry Levinson’s The Humbling (written by Buck Henry based on Philip Roth’s novel), with Patinkin starring opposite Al Pacino, currently in pre-production.

Somehow this tireless performer found the time to appear this Friday, Jan. 10, in the show Mandy Patinkin: Dress Casual, with Paul Ford on the piano, at the Performing Arts Center’s Cohan Center (8 p.m.; all ages; Student and adult tickets range from $35.80 to $85; call 756-4849).

Patinkin, a Tony and Emmy Award-winning performer, “will take the audience on an unforgettable and powerful musical journey, filled with songs from a wide range of composers, such as Irving Berlin, Stephen Sondheim, Cole Porter, and Harry Chapin,” according to press materials.

“Mandy is in the business of show stopping. He is a musical force of nature … . Mandy doesn’t just sing songs: he embodies them,” gushes The New Yorker.
“A tremendous one-man show. [Patinkin] is a singer, raconteur, master of ceremonies, psychologist, and daredevil stunt artist who loves standing alone on the stage, with only his trusty accompanist nearby, ready to fly off into the blue without a safety net,” lauds the Chicago Tribune.
Patinkin won a Tony Award for his 1980 Broadway debut as Che in Andrew Lloyd Webber’s Evita and a 1984 nomination for his starring role as George in Stephen Sondheim’s Pulitzer Prize-winning musical, Sunday in the Park with George. This should be a great night!

This Friday, Jan. 10, Songwriters At Play presents Kenny Blackwell & Dorian Michael who will share featured billing with old-school country singer Amber Cross. “We’re a mandolin and guitar duo who plays a broad mix of bluegrass, blues, a hint of jazz, and some Celtic and Brazilian music on top of it all,” said Dorian. “Amber Cross is the real deal rural American musician. No affectation. No guile. No kidding.” This evening of roots acoustic music will be at D’Anbino’s in Paso Robles. (7 p.m.; $10, reservations at 227-6800).

On Friday, Jan. 10, head to Linnaea’s Café at 8 p.m. to Clayton Severson, a 24-year-old singer-songwriter who grew up on a farm in a small town in northern Iowa. After earning his Bachelor of Science in Biochemistry at Iowa State, he recently moved to Los Angeles and is now manifesting his dream of being a professional musician. If you like James Taylor, John Mayer, Neil Young, and Tom Petty, rest assured: Severson does, too.

Vocalist Judy Philbin returns to D’Anbino on Saturday, Jan. 11, (7:30 p.m.; $10) to perform everything from bebop and gospel to jazz standards and folk; accompanied by Adam Levine (guitar), Bill Wingfield (bass), and Daryl Vandruff (drums). Her latest CD, Keeping it Simple, “is a collaboration with guitarist Adam Levine, featuring the styles of Frankie Lyman to Django Reinhart and Hoagy Carmichael to Roy Orbison,” according to press materials.

Cal Poly Music Department Chair and pianist W. Terrence Spiller will offer a benefit recital at 8 p.m. Saturday, Jan. 11, in the Spanos Theatre, featuring J. S. Bach’s Partita No. 2 in C minor, followed by Béla Bartók’s “Dance Suite.” The second half opens with Maurice Ravel’s “Valses nobles et sentimentales” (Noble and Sentimental Waltzes) and concludes with a set of works by Frédéric Chopin: the Polonaise in F-sharp minor, Op. 44; and three Waltzes (Op. 64, No. 1 and 2; and Op. 34, No. 1). Tickets are $9 for students and senior citizens and $12 for the public. Proceeds will benefit the Cal Poly Music Department Scholarship Fund. Call 756-4849.

SLO Brew doesn’t have the market cornered on top-of-the-line local performers this week because Frog and Peach plays host to one of our very best local bands of the last decade, Damon Castillo, this Saturday, Jan. 11, at 10 p.m. (21-and-older; free). Castillo is a terrific songwriter, fantastic guitarist, and has an amazing voice—he’s the whole package, and though he’s had some brushes with national success, every time I see him I’m left scratching my head and wondering why he hasn’t made the big time. He’s been in the studio working on a new album he plans to release this spring, so I’m forever hopeful this will be the record to launch him into super stardom. Whether playing jazz, funk, rock, soul, or a combination thereof, this group is simply astounding!

Steve Seskin, Craig Carothers, & Don Henry play Tuesday, Jan. 14, at the Painted Sky Concert Series at 8 p.m. ($20 tickets at 927-8330). “These three Nashville songwriters have brought their ‘Songwriters in the Round’ show to the Bay Area each January for many years, mesmerizing audiences with their poignant, heart tugging songs—and doubling us over with laughter at their wit and turn of phrase,” said concert organizer Steve Crimmel. “This is their first time in Cambria.” ∆