There's a moment in the new Moonshiner Collective song "Easy" when a piano, mandolin, and harmonica are dancing around each other as frontman Dan Curcio sings, "When we meet, it's like we never left, easy as the years have past." It's a song about old friends, the kind who—even after a long time apart—fall right back into comfortable old ways. 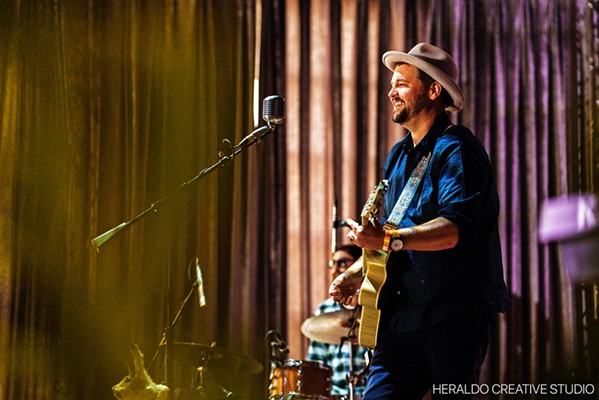 That's what it feels like for me as live shows slowly blossom back into familiar haunts like Morro Bay's The Siren, which reopens to live music this Tuesday, June 15, when Moonshiner Collective plays an album release show for We'll Dance Once Again.

"This album was released mid-quarantine, but this will be its official venue release party," Curcio explained via email. "Although written and recorded before the pandemic, I think these songs feel really fitting for these times we're in—we grouped these songs together because they have a common thread of hopefulness, rebirth, and finding oneself amidst a chaotic world."

The songs and musicianship are typically excellent. Though Curcio is the one constant of Moonshiner Collective, the people he surrounds himself with are amazing.

"This will be the official venue show debut for our new eight-string guitarist Gary Wooten," Curcio noted. "He plays both bass and guitar parts on all the songs, and his guitar is essentially a bass and guitar in one instrument that is routed to a separate bass amp and guitar amp. Watching him do his thing is worth admission alone, but the way he elevates our songs has taken us to an entirely different level musically. We've also got Tyson Leonard (of Tropo) as special guest on violin/mandolin for this one, and I just had one of the best rehearsals I've ever been a part of with him."

This promises to be a terrific reopening for The Siren.

"We're so excited to be able to share music with our Central Coast community in this way again and feeling really grateful for the opportunity," Curcio added. 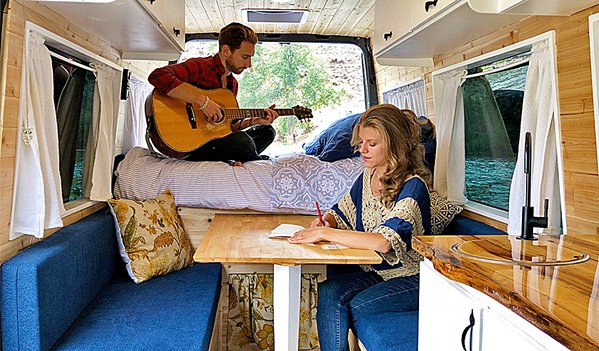 Also this Sunday, June 13, folk singer-songwriter Dulcie Taylor plays Castoro Cellars Winery (1 to 4 p.m.) with a full band: George Nauful, Tim Jackson, Tracy Morgan, and Freeman Lee. "One of the things I've missed the most was live music, both performing myself and watching others perform, and that's why I am so thrilled to announce that I will finally be playing some live shows in the coming weeks," said Taylor, whose YouTube channel just reached a milestone of 3 million views. Check her website for upcoming shows: dulcietaylor.com.

Country star in the making

Modesto-raised and Cal Poly-educated Derek James has perfected what he calls the "coastal country" sound, polished radio-ready music that's about the coastal lifestyle. His newest, "How It Sounds," paints a romantic and familiar picture.

"BFGs on the PCH, hum of the tires gettin' lost in the waves/ Whistle in the wind makes the palm trees sway, oh yeah/ The windows roll down with a couple good cranks/ Music up loud you can't help but sing/ When you're playin' somethin' with a little bit of twang, oh// It could be the taste of a kiss on a Friday night/ The way a girl looks when she looks just right/ Feelin' the roll of a midnight train/ Or the smell of September rain/ I could tell you 'bout the life I found/ But if you listen, I could show you how it sounds." His sound is decidedly country in a Kenny Chesney and Jake Owen vein, but he's also influenced by quintessential California acts the Beach Boys and Eagles. He took second in the country/folk/Americana category of last year's New Times Music Awards. After graduating in 2019 with an Industrial Technology & Packaging degree, he stuck around and has been focusing on his music.

"During my time as a student, I fronted a country band called Grand Ave.," he said in an email interview. "Since graduation, some members have moved out of the area and are pursuing different things. I stayed in SLO to build off the momentum we created and use that to launch my solo music. While my eventual goal is to move to Nashville (end of 2021/early 2022), there is something about SLO that made me want to stay—I feel like I still have unfinished business. I want to release music as a solo artist and continue to build a local and online presence before moving to Tennessee."

He'll be releasing five more singles in the coming months, and a lot of his music is inspired by the California mystique.

"I think California is really unique, especially the Central Coast. Within a hundred miles, there're many distinctly different scenes and types of people: beach bums, farmers, college students, retirees, etc. It's a cool area. Cal Poly is a big ag school and there's a big agricultural presence here, but I think country music is really underrepresented. I'm excited to hopefully represent the Central Coast well and give country music a unique spin that people around here would understand. Country music is about telling stories—real stories—inspired by your life and what you know. For me, that's living here in the Central Coast. I'm not a Southern boy and never will be. I like to write about life on the West Coast, and although we do country things around here, it looks a little different.

"Growing up in the Central Valley, I was surrounded by farmland and ag," he continued. "Coming to school at Cal Poly, I fell in love with the coastal feel of the area. That's where the idea of coastal country came from—I just put together the two things I knew about. If country music is driving down back roads and going fishing, coastal country is driving down back roads and going fishing ... and then stopping by the beach to catch the sunset on your ride home. I've given this definition a lot of thought and I think it explains what I'm trying to do pretty well. Coastal country combines the storytelling and content of traditional country music with modern instrumentation and lyrics to create a unique sound inspired by life on the coast that hits hardest at the beach but plays well anywhere."

You can hear his new song and the others still to be released on all major streaming platforms such as Spotify, Apple Music, iTunes, and YouTube. Learn more at derekjmusic.com. Δ