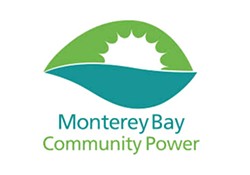 J.R. Killigrew, director of communications for MBCP, gave presentations to the Paso Robles City Council on April 2 and the Arroyo Grande City Council on April 9 about the process and benefits of joining the community choice energy (CCE) agency, which currently services Monterey, Santa Cruz, and San Benito counties.

MBCP will start serving the cities of SLO and Morro Bay in 2020—their city councils voted in late 2018 to join after dropping efforts to start a SLO-based program—growing its customer base to about 307,000 residents and businesses.

"Since the cities of SLO and Morro Bay joined, it gave us a chance to think about the bigger picture," Killigrew told New Times. "If we're already serving two of the communities in SLO County, we're starting to see a unified Central Coast program."

With 19 programs in existence statewide, CCEs purchase their own energy and sell it to customers via PG&E's existing infrastructure. The agencies are governed by local elected officials, through boards of directors.

Killigrew said since its launch in 2018, MBCP has been able to beat PG&E's rates with a carbon-free energy portfolio—providing 3 percent rebates to customers.

Killigrew added that future projections indicate CCEs will provide 85 percent of the electricity load in California by 2025. He described it as a new energy paradigm, where CCEs manage power procurement while PG&E provides and maintains infrastructure.

According to MBCP's presentations to the local cities, SLO County customers could save an estimated $4 million per year in electricity costs if all residents and businesses joined. Paso Robles customers would save about $500,000; Arroyo Grande's about $165,000.

Arroyo Grande City Manager Jim Bergman told New Times that City Council members were receptive and supportive of the concept on April 9, but they wanted to schedule a future meeting for the public to ask more questions.

"One [council member] said, 'I'm going to ask you some pointed questions because this just sounds too good to be true,'" Bergman said with a laugh.

Paso Robles Public Works Director Dick McKinley said the Paso City Council would likely vote in May on a first reading of an ordinance to finalize its decision.