More fun than a barrel of rednecks 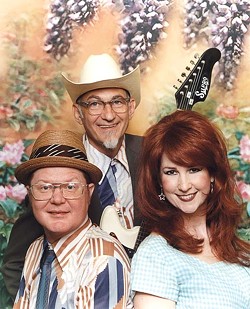 I don’t know if they still do this, but one of the things I loved about Southern Culture on the Skid’s live show was that on their rider they required the promoter to provide a bucket of fried chicken, which the band summarily threw at the audience during their performance. The gesture perfectly summed up the band’s campy shtick as they sang about drinkin’, flat track racin’, and illicit rendezvous.

Exhibit A: The lyrics to “Cheap Motels.” Well out on the bypass/ Not too far/ There’s a joint that’s a jumpin’/ When they close up the bars// Well if walls could talk/ Man, the stories they’d tell/ Holding up the roof on a cheap motel/ Holding up the roof on a cheap motel// You can rent ’em all night/ But they’re cheaper by the hour/ The towels are clean/ But they still smell sour// The night clerk’s smiling/ ’Cause he’s usually stoned/ But you can do out there/ What you can’t do at home.

This trio of faux trailer trash revels in creating a parody of the most stereotypical Deep South clichés, but they do it with an obvious reverence for the culture they’re lampooning. It doesn’t hurt that the songs are a hoot!

And while we’re on the subject of Downtown Brew, here’s what else is happening at the club this week:

On Saturday, Sept. 12, mysterious acoustic rock guy The White Buffalo plays a 7:30 p.m., all-ages show for $10. He’s performed a couple of underground shows locally, but I always seemed to miss him, but then again, in Native American lore the white buffalo is a sacred and elusive being. This White Buffalo is no different: he’s a touring machine, but he seems to always be under the radar. He’s written hundreds of songs, yet he’s only released one EP. Unravel the mystery on Saturday. 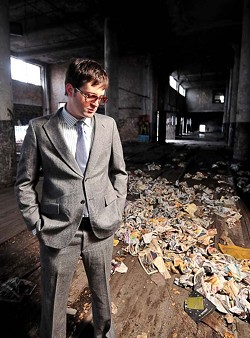 On Sunday, Sept. 13, Mayer Hawthorne plays a $10, 7:30 p.m., all-ages show with Buff 1 opening. Hawthorne looks like a bespectacled dweeb who should be playing French horn in a high school band, but looks can be deceiving. The Michigan native has fond memories as a child of riding in the car with his pops and tuning the radio to soulful sounds of Motor City. “Most of the best music ever made came out of Detroit,” claims the singer, producer, and multi-instrumentalist, who counts Isaac Hayes, Leroy Hutson, Mike Terry, and Barry White among his influences.

On Tuesday, Sept. 15, Joshua James, with Cory Chisel opening, plays an 8 p.m., all-ages show that costs $8 presale or $10 at the door. James is just 25, but he’s already released his second collection of splendidly conceived songs on Build Me This. Think of him as America’s heartland poet, grabbing the baton passed by Bob Dylan and Neil Young and running with it. 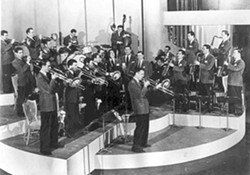 Nobody knows what happened to Glenn Miller. After leading one of the most popular Big Bands in the history of swing music, he joined the Army to entertain the troops. In 1944, his plane simply disappeared in bad weather while traveling to France, but from 1938 until his disappearance, he was The Man!

A few of his signature recordings included “In the Mood,” “American Patrol,” “Chattanooga Choo Choo,” “Tuxedo Junction,” “Moonlight Serenade,” “Little Brown Jug,” and “Pennsylvania 6-5000.” And even though he was gone, people weren’t ready to let him go. They’re still not, which is why the Glenn Miller Orchestra is still going strong 65 years later.

On Thursday, Sept.10, at 7 p.m. in the Performing Arts Center’s Christopher Cohan Center, The Glenn Miller Orchestra will perform hits made famous by its vanished leader as well as other great tunes from its repertoire of more than 1,700 compositions.

“Mostly we play the old songs,” explained O’Brien. “We manage to insert new ones from time to time, but those are songs that lend themselves to the Miller sound.”

I’ve seen the orchestra a couple of times, and though Miller is gone, his spirit lives on in the musical magic of this talented ensemble.

Student and adult tickets range from $20 to $48. Buy them at the Performing Arts Center Ticket Office or by calling 756-2787.

Molly’s Revenge guitarist Stuart Mason has switched his Gather Wine Bar weekly gig from every Wednesday to every Thursday, including Thursday, Sept. 10. Check him, and whatever surprise musical guest he brings along, from 6:30-9:30 p.m. “Gather Wine Bar has proven to be a great venue for my old-time traditional music,” said Stuart. “The place has a vintage vibe to it, the folks are warm and friendly, and something about all the wood brings out the tone of my acoustic instruments. Every week I invite one or two fiddlers or pickers to join in, and suddenly we have a band!” The native West Virginian has won awards for traditional singing (Goleta Old-Time Fiddler’s Convention), mandola (Topanga Banjo and Fiddle Contest), and songwriting (West Coast Songwriter’s Association). New Times recently included “Devil’s Box,” a song from his solo release Appalachian Bride, on the first New Times Music Awards Top Twenty CD. That’s how awesome he is!

If you’ve never been to the Henry Miller Library in Big Sur, there’s a great reason to go on Friday, Sept. 11. That’s when Chicago songwriter Al Rose joins creative forces with the improv group Varoom to celebrate the works of Henry Miller beginning at 7:30 p.m. The library definitely has a cool scene going: a beautiful setting, avant-garde entertainment, and an eclectic crowd that’s almost as fun as what’s happening on stage. Varoom, an improvisational trio that specializes in unique, long-form improvisation shows, will (for the first time ever!) be performing Henry Miller Unscripted, a completely improvised play inspired by the works of Henry Miller. Call 831-667-2574 or visit henrymiller.org to get your $17 presale tickets, or pay $20 at the door.

Grammy Award-winning violinist Kathy Lenski, a classical performer who’s added immeasurably to the local scene since moving to Los Osos several years ago, has sadly developed some physical problems that have left her unable to play and often in a great deal of pain. She’s in dire need of expensive tests to discover the source of the malady and hopefully find a cure, but like too many musicians, she’s under-insured. Well, just as she’s added to the local classical music scene, now it hopes to return the favor by raising funds on Saturday, Sept. 12 at 3 p.m. with a special fundraising house concert featuring Paul Severtson, Louise King, Marti Lindholme, Nancy Piver, Richard Webb, Stanley Stern, and others. Call 528-6557 for reservations as seating is limited.

On Saturday, Sept. 12, at 8 p.m., the Richard Green Band hits the Steynberg Gallery for an evening of Green’s amazing compositions that can sound like Dire Straits one minute and Steely Dan the next (but always like Richard Green). He’s been on the local scene for so long that people sometimes forget how deep his talent runs, something made very clear to me again when I listened to his most recent recording Better Days. The show costs $10, and it will be filmed for an upcoming video Green is producing to promote his new CD. If you haven’t seen Green lately, don’t miss out!

Alaskan bluegrass/newgrass quintet Bearfoot got their start as musical camp counselors, but their ferocious musicality and boundlessly entertaining show was too big for an Alaskan summer camp to contain, which is why they’re now touring sensations. Check them out on Saturday, Sept. 12 at the Clark Center. Call 489-9444 for ticket information.

What time is it? 9:30 p.m. is Functus time on Saturday, Sept 12 at Sweet Springs Saloon. That’s when local jazz stars Jacob Odell and Dylan Johnson will get together with Santa Barbara über-percussionist Steve Campbell to play a night of heavy-hitting funk. “We want to take you higher,” claims the band.

“This past week was a monumental one as Cuesta Ridge finally got our recording project underway by entering into the studio and hammering out a buncha songs,” said drummer Brent Vander Weide. “We’re off to a great start and can hardly wait to get it down solid and out to you. Of course, we plan to spend the time necessary to put out something of which we can be proud. Speaking of … we’re proud to announce that we’ve recently been added to the Saturday, Oct. 3 Harbor Fest lineup along with Canned Heat!” Before that, however, you can catch CR on Sunday, Sept. 13 at Castoro Cellars from 1 to 4 p.m. Better yet, the show is free.

Internationally acclaimed violin virtuoso and composer Kim Angelis plays Coalesce Bookstore on Sunday, Sept. 13 from 2 to 4 p.m. The classically trained performer makes each string sing “like a gypsy poet.” She also writes most of the music that she performs, leading listeners “through breathtaking cadenzas and tender passages.” Her husband, classical guitarist Josef Gault, provides accompaniment. Tickets for Kim Angelis and Josef Gault cost $10 (772-2880).

On Sunday, Sept. 13, guitarist Ron Eschete and his trio will be the next attraction at the Famous Jazz Artist Series at the Hamlet in Cambria. Eschete’s made numerous highly acclaimed recordings with such jazz giants as Ray Brown, Milt Jackson, and Dizzy Gillespie. On Sunday he’ll be joined by Todd Johnson (bass) and Kendall Kaye (drums) as well as series co-producers Charlie and Sandi Shoemake (vibraphone and vocals). See the 4 p.m. show for $15, the 7:15 for $12, or both for $20. Call 927-0567 for reservations.

Seattle’s Levator returns to the Frog and Peach on Monday, Sept. 14 for a free, 21-and-older, 10 p.m. show. The shoe-gazing, psychedelic indie rock act yaps your vein and shoots in a tranquilizer of gauzy sounds that will remind listeners of Morphine, Sonic Youth, and Mazzy Star. Trip-tastic!

Painted Sky Studios has an intimate evening of Celtic music scheduled for you when Paddy Keenan returns to the Cambria venue on Wednesday, Sept. 16, at 8 p.m. The Irish uilleann pipe player is back for this third show in as many years, and word is he loves playing here as much as we love hearing him play. Tickets are $20 (927-8330).

Glen Starkey is back from vacation and he’s very, very angry about it. Send him a virtual piña colada to gstarkey@newtimesslo.com.