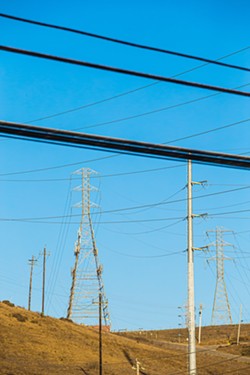 The "flipping of the switch" for these communities, which took place ceremonially on Jan. 14, is a continuation of 3CE's southward expansion from the Santa Cruz/Monterey/San Benito tri-county area, where the agency originated, to SLO and Santa Barbara counties.

Now, 3CE will have nearly a half-million customers that span five counties and 26 cities (Atascadero and unincorporated SLO County are the lone local holdouts). 3CE leaders and proponents promise that the switch will reduce members' electricity bills and localize energy governance.

"It is bringing decision-making about energy closer to the people," said Das Williams, 1st District supervisor for Santa Barbara County, in comments made at the Jan. 14 ceremony. "It's been my dream for some time that some of the prosperity that has taken place in clean energy jobs in the six counties of the Bay Area would start filtering southward. ... That dream might become a reality."

Initially called Monterey Bay Community Power, 3CE first launched in 2018 as a community choice energy agency under state law. The Central Coast energy agency is one of 24 operating in California, and these entities purchase power on behalf of their customers while PG&E or the incumbent utility continues delivering the electrons. The net benefit of community choice energy, according to proponents, is to get local control over power sourcing and the ability to reinvest profits in the community.

As a pitch to customers, 3CE is offering a 2 percent rate reduction from PG&E and a carbon-free energy portfolio. It also touts a goal of 100 percent renewable energy generation by 2030.

"That's a whole 15 years ahead of California's energy goals," said Bruce McPherson, a Santa Cruz County supervisor who's considered the founder of the agency. "This expansion today really accelerates the environmental and economic benefits."

Officials emphasized that the accelerated all-renewable target is really put in reach thanks to 3CE's expansion. With a larger customer base and more buying power, 3CE can now chase more substantial solar or wind projects than it could before, which can then account for a larger share of its power load.

To Williams, that's a critical benefit to the Central Coast.

"The economies of scale allow us to move away from what I'd characterize as more symbolic elements of energy procurement and toward more investment in substantive, long-term contracts for renewable energy, and even building such facilities ourselves," Williams said.

Customers have the option to opt out and stay with PG&E for their power generation services. Instructions on how to do so will arrive in the mail, or customers can visit 3cenergy.org for details.

The ability for residents to choose their power provider is an important element of 3CE to Santa Maria Mayor Alice Patino.

Patino initially opposed her city joining 3CE—thinking it was "too good to be true"—but now she represents Santa Maria on the agency's policy board and "feels good about it."

"If it brings security as far as energy to our community and if it lowers our rates, that's important to people," she said. "I don't see any hidden agendas out there. I think people are pretty honest there on the board. And people have the ability to opt out."

Carpinteria and Goleta will join 3CE in October—these communities are the first to join within the SoCal Edison service territory. After that, 3CE officials say they have no intention of expanding farther north, south, or east.

• The Land Conservancy of SLO County recently purchased the Santa Rita Ranch, a 1,715-acre property sitting atop Highway 46 West. Under the nonprofit's ownership, the ranch, which features "towering valley oaks, dense bay laurel forests, and a remarkable freshwater lake," will be permanently protected, according to a Jan. 14 press release. The property will be maintained as a sustainable working cattle ranch, wildlife preserve, and future nature education center. The Land Conservancy raised nearly $6 million over three years to fund the project, and it continues to seek donations for the project, the press release said. Δ