In a recent investigation of nearly two dozen wells close to the airport by the Central Coast Regional Water Quality Control Board, all but one detected traces of perfluorooctanoic acid (PFOA) or perfluorooctane sulfonate (PFOS), industrial chemicals that have been linked to cancer and other health issues. 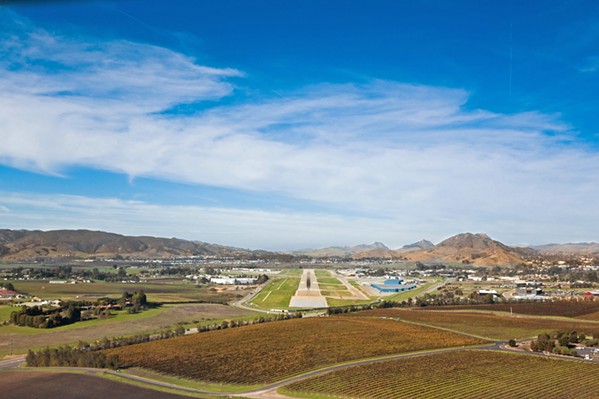 The testing was part of a statewide investigation of PFOA and PFOS near airports or landfills, where the chemicals commonly leak from. The chemicals are present in everyday consumer products like carpet stain repellents, cookware nonstick coatings, and food containers, and they're also in fire-fighting foams.

"Because of the many different sources and uses and through improper disposal, spills, and other types of releases, [PFOA and PFOS] have been introduced into the environment and are present in some food and drinking water sources," a Sept. 9 public notice from the regional water board stated.

Of the 21 wells near the SLO County airport that tested positive, four tested at levels that rose to the "response level," which is when public water systems are advised to take a water source out of service or provide treatment.

Since the testing, three of the four airports and 12 landfills in the Central Coast Regional Water Quality Control Board's territory have submitted work plans to further investigate the source.

"Central Coast water board staff are currently reviewing the work plans to advance these investigations," the public notice read.

Domestic well users in the airport area are advised to test their wells for PFOA and PFOS and, if detected, consult with a treatment specialist to identify the appropriate treatment method. Common treatments include granular activated carbon and membrane filtration.

The discovery of PFOA/PFOS near the airport comes as the same region deals with trichloroethylene (TCE) water pollution. The water board's probe into the TCE contamination took years to complete, and it ultimately alleged that a local machine shop was responsible. Δ

Editor's note: This article was edited to remove a paragraph about SLO County's free domestic well testing program because the program does not test for PFOA or PFOS.