Moriarty in the broom closet with a flowerpot

Holmes gets a makeover in SLO Little Theatre's production 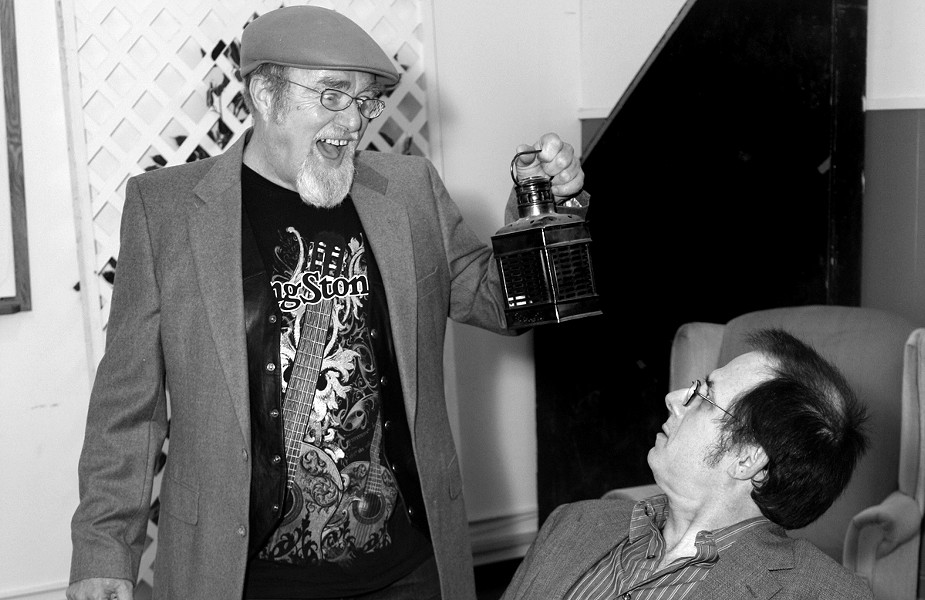 SLO Little Theatre’s production of Sherlock’s Last Case—which runs through June 20—couldn’t possibly be a flop. Playwright Charles Marowitz knew one very important thing about American audiences: their appreciation for a character with a British accent delivering acidic one-liners about Americans is boundless. In fact, I rather suspect that the entire play was written as an excuse for Marowitz to create such lines as “Boorishness parading as wit, could anything be more British.”

While the audience chuckles over that dry British humor, theatergoers who expect that little something extra from their theatrical experience—a poignant message filled with meaning, perhaps about a social cause—might be left wondering whether the production caters to their tastes as well. The answer is no. But the production is well acted, the set is enticing, and the title character is iconic. And that will probably suffice for many local theatergoers.

Director Bill McLaughlin, who also happens to be a member of the season selection committee, chose the play as his 14th and final production at the Little Theatre. He likens the play to a François Truffaut film in which half the audience is laughing and the other half doesn’t quite know why. The director is also quick to point out that he has the necessary qualifications to do Doyle proud.

The play opens in Holmes’ iconic lodging, 221-B Baker Street. Holmes is simultaneously applauding his genius on a recent case, demoralizing the trusty Dr. Watson, and harassing the maid, who can only howl about the smell of Holmes’ pipe and pronounce him “wicked.” Alan Benson, who plays the title character, delivers the character’s bravado, swagger, and lengthy pronunciations with ease, much as if the endless pages of script were a playground rather than task. And it is, admittedly, enjoyable to hear him bash whatever demographic happens to come to mind, even if many of the audience members happen to fall into that particular group. “What woman who was truly a woman would miss a chance of admiring herself before the mirror,” asks Holmes, and the female segment of the audience titters rather than rages. Being Sherlock Holmes gives him license to say anything while offending no one, with the exception of whoever happens to be attempting to kill him, that is.

Because the cast is small—the precise size can’t be disclosed without revealing who-dun-it secrets—the sheer volume of dialogue is immense, and it flies about quickly. Fortunately, according to McLaughlin, Benson’s resume “looks like a scroll.” And the PCPA-trained actor has experience with the Central Coast Shakespeare Company, which works in repertory, meaning that he has experience memorizing and delivering lines from two different plays.

Watson, played by Dusty Hughes, is a problematic figure. He spends the vast majority of the first act asking Holmes what he’s doing and fretting over potential danger. Just as Holmes seems to dismiss Watson, the audience likely experiences the same inclination. The problem is not that he’s unlikable, but that he’s so flat he’s hardly a person. There’s little doubt that Hughes is up for the task of playing Watson, and manages the endless flow of dialogue admirably. But it’s difficult to make much of a character whose primary purpose seems to be giving Holmes an opportunity to explain his long and sometimes tedious chain of logic.

Inspector LeStrade, played by Ed Cardoza, fares better as a complex character, which was unexpected considering the fact his character has appeared so frequently in books, plays, and film. LeStrade is, after all, just a nationality and channel separated from the infamous Inspector Clouseau. But Cardoza plays the character with such earnest appeal that his inability to walk across a room without displacing at least a couple of chairs becomes endearing. And while he is a character who will do what he perceives to be the right thing in a given situation, he isn’t predictable enough to be boring.

Likewise the play’s two female characters fulfill their roles admirably, Rosh Wright as the long-suffering and dramatic Mrs. Hudson, and Amy Barrick as femme fatale Liza Moriarty. Unfortunately, Moriarty’s character itself does pose some problems. The plot hinges on the notion that Holmes’ weakness for fair-skinned redheads might lead to a lapse in his judgment. Not bloody likely. The Holmes of Doyle’s imagination had a shard of ice where his heart ought to have been, and no member of the fairer sex could entice him to discard logic. McLaughlin acknowledges that Marowitz wrote the play’s Holmes as more of a ladies’ man in order to round out the character. But Holmes’ appeal as a character is his inhumanity, which separates him from ordinary mortals.

Along this vein of complaint, there is a scene in which Holmes preens in front of a mirror, fretting because a letter said that he was 51 years old. The entire incident comes across as affected for a few laughs, and altogether false, especially to Holmes’ character.

Taming Holmes may be something of a requirement for a play that aspires only to entertain. The character frequently indulged in cocaine and morphine, neither of which makes an appearance in the play. In fact, McLaughlin was concerned that the audience would be offended when Holmes puffed away at his pipe, which was actually stuffed with an herbal concoction rather than tobacco. It’s difficult to imagine the detective without his pipe, but the director points out that it’s equally difficult to predict what might give offense.

“If I didn’t think the play was accessible I would never choose to do it,” said McLaughlin. “I don’t believe in doing elitist plays to prove how intellectual you are.”

Rejecting elitism is all very well, especially considering that the play was very well put together, but it would be nice to see the Little Theatre aim higher and demand more of its audience.