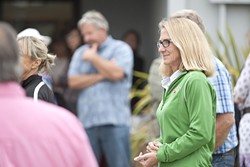 It began as what sounded to many locals as a sudden and unexpected announcement: There would be a major changing of the guard in the Morro Bay city administration. It ended up lasting three antagonistic months.

In November, City Attorney Rob Schultz was given the boot by a slim city council majority. On Dec. 12, City Manager Andrea Lueker accepted a separation agreement with the city she’s served for more than 27 years.

She was placed on administrative leave Dec. 13, and her final separation date will be Jan. 3.

According to the agreement, Lueker will receive $116,469—the equivalent of nine months’ pay—as well as about $37,333 in remaining vacation, sick leave, and holiday pay.

The agreement states that she may not accept—nor may the city offer—employment with Morro Bay for three years, and that any disputes between the city and her are officially resolved.

“I am proud to have been a public servant for the City of Morro Bay and believe that public service is about putting others first and trying to make the world a better place, usually one person and one need at a time. I believe we have done just that in Morro Bay,” Lueker wrote in a statement to the public.

“In leaving, it is very important to acknowledge the City of Morro Bay likely has the best public workforce in the state. Despite tough times, our department heads and city employees continue to find innovative ways to improve the services we offer and provide to the community. During my time with the city, I have been blessed to be surrounded by high-caliber professionals, a similar group likely not found anywhere.”

She added that she was proud of accomplishments made during her tenure, such as providing new parks and open space and enhancing city infrastructure, facilities, and programs.

“I am also extremely humbled by the outpouring of support I have received during the past few months,” she wrote. “I am sad to leave the city of Morro Bay, but excited about this new chapter in my life.”

She has not stated publicly what she plans to do following her separation.

Schultz has since taken a job as counsel for the town of Los Gatos in the Bay Area.

The City Council, however, has begun the process of filling Lueker’s former position.

“The city has appointed Ms. Susan Slayton as acting city manager, who has held this position in Ms. Lueker’s absence in the past,” Mayor Jamie Irons stated in a city press release. “We are placing our confidence in Ms. Slayton while we pursue an interim city manager. This separation agreement concludes this matter, and we are now ready to move on.”

Citing rules regarding personnel confidentiality, the city has never stated why the action was taken against the two long-time—and according to many residents, very popular—public servants.