Put some thought in

Ponder human existence and its impact on the planet in Broken Nature at the Art Center Morro Bay through May 24. The Morro Bay Art Association gallery is open from noon to 4 p.m. every day. Visit artcentermorrobay.org for more information.

Frozen berry packages, Target shopping bags, and skinny Subway sandwich wraps are woven between the plastic squares of an orange construction fence. Suspended across the ceiling, it's the first thing above my head as I crest the top of Art Center Morro Bay's stairs.

Already off balance from attempting to read the pandemic commentary art on envelopes strung end to end like too-high banisters along the stairwell walls, I gaze up with an open mouth as Morro Bay Art Association Art Gallery Director Barbara Sitar tells me to check out the woodwork that's next to my legs.

She runs her hand along a wooden bench with characters carved along its edge. 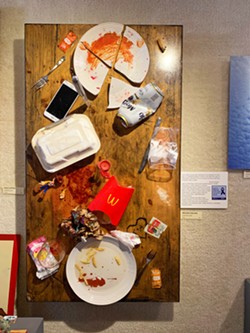 "She invented her own language when she was a child," Sitar says of artist Hannah Sadler. "She fills her wooden pieces with this language. It feels very ancient, sacred, when you look at it."

Centered in the upper part of the gallery, Sadler's benches, tables, stools, and throne-like rocking chair anchor the environmentally focused portion of the gallery's latest exhibit, Broken Nature, which runs through May 24. Sitar said Sadler salvages "unusable" wood from lumber yards, pieces that would otherwise be chipped into mulch or tanbark, takes them home and turns them into furniture.

"Sit in the chair," Sitar tells me.

I do as instructed, taking a seat and leaning back.

Across the room, Sitar's giant mixed-media piece stares back at me. Depicting one of the oldest living trees in the world in great brush strokes of black, gray, and white, the more than 4,800-year-old bristlecone pine known as Methuselah takes her place on a canvas stitched together from yellowed images of settlers logging the giants that once populated America's forests. 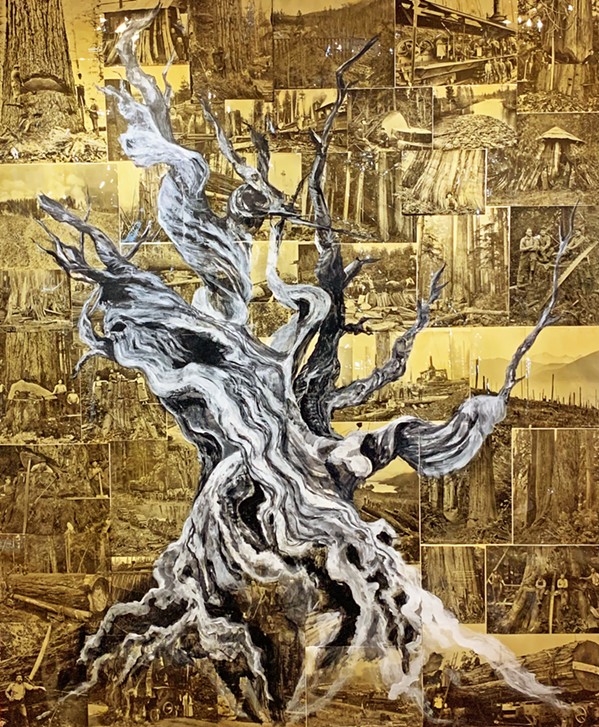 It's jarring. Beauty and destruction, together. A juxtaposition of the dueling realities that are human existence. Fires and flowers. Drought and abundance. Consumption and growth. These are the thoughts that Broken Nature is designed to stimulate in the onlookers who walk through the gallery.

"Artists are actually placing a mirror in front of us and showing the devastation, but also offering alternative ways of living," Sitar said. "It is something that's rather an experience to come to this show, rather than just a gallery visit. And people spend way more time here than what we are actually used to."

People usually spend about 10 minutes in the gallery, on average, she said. But during this exhibit, some visitors spend up to an hour in the Art Center. Artists depict California wildfires, conservation, child abuse, consumerism, deportation, pollution, and the ocean's garbage patch. But that's only on the second floor of the gallery. The first floor focuses on human nature and reactions to the pandemic.

"How we deal with our own broken nature, what is there when we tap into our psyche, so it deals with questions of psychological disintegration and loneliness and lack of connection," she said. "It also offers some rather apocalyptic visions for human beings."

Ami Lynn Ursey's The Commodity of Fear and Rachael Wahl's What Dies in Life Lives in Death offer similar images of that vision. Ursey's shows a map-clad, masked man in nitrile gloves surrounded by a skull, social media symbols, a burning flag, and money, while crows pick apart a naked women draped over boulders in Wahl's piece.

Carla Steinfeld's 9/11 Forever is a detailed alternative look at the dollar bill. Filled with bright colors, stark images, and various freedom flags, the Twin Towers reflect off the Hudson River behind the "ONE." Pieces like these make a statement, Sitar said.

"This is voicing an opinion. The art, rather than being a pleasing piece for above the couch, the art is intense, immediate, loud," she said. "Pleasing art doesn't push the world forward. It's this kind of art that does."

But, there is also art that can be both.

Phillip Carey, whose artful commentaries adorn the envelopes in the stairwell, collected all of the food packages delivered to his house during the pandemic and recycled them into a large collage of his Morro Bay home.

A Self-Potrait In Pandemic Year takes up the window nook at the gallery's entrance.

"Because I have a great new transplanted kidney and am on immunosuppressant drugs, I'm at the tip-top of COVID-19's 'death list.' Since I have so much more artwork to finish in my life, the pandemic is real and serious to me," Carey writes in a statement accompanying the piece. "Between February and December 2020, I had all the necessary food and supplies delivered to my porch. Unpacking the first 13-bag order, I decided to represent my sequestered year with a self-portrait made from all that packaging."

It's beautiful and serene, but upon closer look you see a man behind two fences staring out at the world. Carey's piece emulates peace and isolation at the same time. A detailed, intricate, whimsical self-portrait of a man stuck inside.

"This is a true example of the loveliest recycling possible," Sitar said. "It's almost like a large, glorious puzzle. ... This is consumerism, you see, turned into beautiful art." Δ

Editor Camillia Lanham is into catharsis, chaos, and conversation. Reach her at clanham@newtimesslo.com.