Craig Griswold: 2020 will be on display through Feb. 23 at the SLO Museum of Art, located at 1010 Broad Street, San Luis Obispo. To view Griswold's full adventure book, Journal of an Expedition to the Gobi Desert And the Great Sandstorm of 1833, visit sloma.org/wp-content/uploads/2020/01/Griswold-Book-.pdf.

Walking past Craig Griswold's home and studio, one would never guess what lies behind the thick, wooden front door. Other than a large, wrought-iron key sticking out from the front of the building, the Spanish-style exterior is simple and unassuming.

But step inside, and Griswold's eclectic artistic cocoon soon makes itself known. The front entryway is met with dark wooden stairs that lead up into a lofted room above: Griswold's studio.

Tall and slender cathedral-style windows let in copious amounts of light, even on a cloudy Morro Bay day. The light illuminates the surface texture that Griswold works into many of his paintings, which stand on massive easels around the room. In between partially finished paintings is a table strewn with oil paint tubes, a pile of paper letter stencils, an empty Mason jar, and other artsy odds and ends.

The old-growth redwood ceiling—still in its original state from around 1900 when the building was constructed—has never been painted.

"To me that means that the building can kind of breathe," Griswold says as we stand below the ceiling—impressively high for a second floor.

The home was originally built as Morro Bay's first community church and then housed an antique store for a number of years. Griswold bought the space after making what he called a simple "gentlemen's agreement" with the owner. Today, it's where he lives and creates.

"It's a part of who he is," his daughter-in-law, Jenna, told New Times.

This desire to preserve and appreciate antiquity is felt in many of Griswold's works. In his exhibition, Craig Griswold: 2020, which is currently on the walls at the San Luis Obispo Museum of Art (SLOMA), Griswold's paintings, drawings, and three-dimensional pieces are rife with references to the past. Many of his works clearly draw influence from the artist's academic background in history and Egyptology, disciplines he studied as a student at UC Berkeley.

One series of pen-and-ink drawings in the exhibit carries a historically inspired story. Journal of an Expedition to the Gobi Desert And the Great Sandstorm of 1833, made by Griswold for his twin grandsons, is a children's adventure book that documents the fictitious journey of English artists who recorded their sightings through the Gobi Desert. Some of those "sightings" included a magnificent blue bird piercing a golden fish with its beak and exceptionally detailed, primary-colored butterflies. The artists also came across monuments and buildings from an ancient city uncovered after a sandstorm: "The Great Sandstorm of 1833." 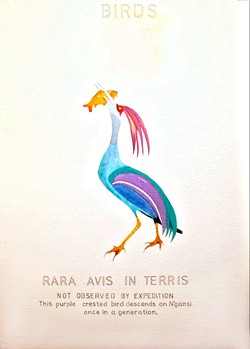 "When I did that storybook, [the idea] came to me that there would be a sandstorm that swept away the sand and exposes something," he said.

On another page of the book, Griswold lists the fictional expedition members. His hand-drawn script is a work of art in itself and shows Griswold's ability to work with precision to create minuscule details. Whimsical names like "Mr. Barthèlemy St Hilaire" and "Captain A.C. Green" fill the center of the page, while a dragon borders it. Painted with red, blue, green, and yellow watercolors, the dragon looks like something out of a child's wild imagination.

It's difficult to believe that the intricately detailed creature was drawn without any technological aids, other than a rudimentary fountain pen and a bottle of ink. But as a man who prefers to live without a computer or cellphone, Griswold uses absolutely no digital tools to render his work. The large pages from the book line a corner of Griswold's SLOMA exhibit, yet are only a sampling of the full story that he illustrated for his grandchildren.

The representational drawings are also just a fraction of the whole exhibit, which includes a number of figurative works that lean toward something more abstract. One striking pastel features half of a ripe avocado set against a bright, modern-feeling background. From the detailed pen-and-ink drawings to funky pastels like this one, Craig Griswold: 2020` lets us inside the mind of an artist who has no doubt mastered more than one medium.

But for Griswold, this openness to creating different types of work is simply the way he lives his life: "I've never been rigid about the direction I'm going," he said. Δ