When M.L. (Margaret) Burdick saw a documentary about greed, she did not intend for its themes of human suffering and rampant materialism to end up in her art. But, lo and behold, there it was—in golden hues and red splotches—infused into one of her abstract ink paintings moments later. The result was unexpected, subtle, and intriguing—all characteristics that underscore Burdick’s work, currently showing at Linnaea’s Café in San Luis Obispo.

In essence, Burdick’s paintings all contain similar ingredients. They all begin with an alcohol-based ink, and they all display bursts of color in some vaguely globular form or another. Beyond that, your guess is as good as mine. From the small to the large and the muted to the vivid, Burdick’s paintings may begin with the same, basic materials, but the end products are remarkably diverse.

“Everything will show up in a painting,” Burdick said over the phone. And, a truer statement couldn’t be made of her art. At the same time that her paintings defy a single set of narratives, they also evoke a multiplicity of emotional and intellectual interpretations. In “Cognition,” for example, you can once again, see vast swaths of color—radiant lemon yellows and murky turquoises—that whirl together in seemingly formless direction. From one angle, this could be a cheerful tizzy of tie-dye that sort of looks like an ear; From another, it could be a torrent of confusion where things run amuck and aimless; Or, you know, it could just be some pretty colors. 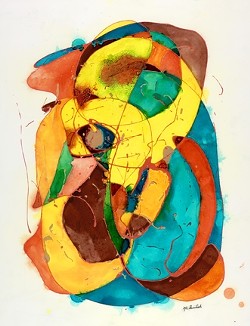 Color, in fact, is what drew Burdick to painting in the first place. She began as a photographer in New York, and was formally trained in black and white composition. Then, she came to California.

“When I first came here with my aunt in 2008, I couldn’t believe all the flowers just along the highway,” she recalled. “I had been studying black and white and all of a sudden, a few years ago, ooo…color!”

Now a Morro Bay resident, Burdick sells art supplies in between her experimental methods of making art. Like her paintings, Burdick’s techniques are highly varied, spontaneous, and unconcerned with the kind of tedious, cerebral forethought common to the abstract genre. Usually, she commences simply, with just a color in mind. It could be the color of a flower, a particular hue she glimpsed in a movie, or even something as rudimentary as stars in the sky. Then, she will lay down a base layer of ink and add or subtract layers based on whatever may be surrounding her: squeegees, hairspray, plastic bags, miscellanea from the dollar store. In the vein of Bob Ross’ “happy little accidents,” Burdick goes with her ink and just goes with the flow.

“Personally, I think it is way too easy to overthink art,” Burdick explained over email. “If a piece draws you in, creates a feeling within you, then that feeling has more value than any intellectual overlay.”

However, despite her relaxed insistence that these pieces are uncomplicated, their titles and disparate inspirations indicate otherwise. In particular, Burdick’s titles relay a deep and profound interest in natural processes or, as she hinted, “moments of creation.” Several of her pieces convey subjects of a scientific bent, with pieces called “Plankton Rise” and “Origins.” The dark and moody “Silver Spoor,” with its isolated spheres of greasy green and gray, mirrors images of an asteroid belt. The stained-glass look of “Genesis” conjures thoughts of cellular evolution and clustered amoebae while the psychedelic color swirls of “Cognition” evoke the kind of languid complexity that Burdick’s work highlights.

While her pieces may seem basic, they evolve, element upon element, into something elaborate and imminently eye-catching. In conception and in composition, Burdick’s paintings are organic expressions that appear as calm and straightforward, but lead to provocative conclusions. Though Burdick maintains the low-key veneer.

“The paintings don’t happen obviously,” she said. “There’s no direct connection and there’s nothing deliberate. I enjoy painting and am prone to spilling.”

Jessica Peña paints with all the colors of the wind at jpena@newtimesslo.com.