If Marvin Sosna's name sounds familiar, it might be because you've read one of his many books, or maybe an article in a newspaper or periodical, or perhaps a poem or three. Sosna, 93, spent 40 years in journalism as a reporter and editor of daily and weekly papers in New Jersey and California. He spent 30 years teaching journalism at California universities, including Cal Poly. For the past 20 years, he's been writing books, a play, and six volumes of poetry.

His fictional work Brandon's Trail (2006) is about a hike along the John Muir Trail, which Sosna himself completed. Greece (2015) is a published journal of photos, stories, and poems about Greece. The Music of Composer G. Tautenhahn (2014) is a nonfiction work about the famed avant-garde composer. Perhaps most interestingly, The Double Double Cross (2017) is a work of fiction Sosna wrote in 1949 that was discovered in a storage locker and published on the author's 90th birthday.

Lately he's been painting up a storm of color and lively brushwork, creating works he'll display through Sept. 27 at the Cambria Center for the Arts Gallery in a shared show called Taming the Restless Mind, which also includes the Central Valley artist Deborah Pepin. You can view the show remotely at cambriacenterforthearts.org/gallery.

"I started painting in 1949," Sosna explained via email. "A community center in my hometown, Perth Amboy, New Jersey, started a painting group as an activity, and I figured it would be a place to meet girls. I did one still life of a pitcher and a cup, I guess you'd call it impressionist, and I liked it more than I liked any of the girls.

"Off and on afterward, I painted as the opportunity occurred, in adult education courses in cities where I lived. Then in 1963, I became the editor of the Conejo News that quickly became the News Chronicle in Thousand Oaks, and there was no time for anything else. But it never left my mind. When my wife and I moved to Morro Bay in 1991, a studio easel that I'd acquired and not used went with us, and in 2007 when I stopped teaching journalism at Cal Poly, I decided that now there was 'time for anything else,' so I bought a bunch of canvases and a batch of acrylics, and that was that."

"I am self-taught but have had absentee tutors," Sosna explained in his artist's bio. "In museums where I approached their works from a distance, then grew near, followed their brushstrokes, saw their intelligence, mastery of their media."

Also from his bio, he mentioned he's drawn to abstract expressionism because it offers "a vast horizon where intellect and emotion merge into a single entity free of restraint." 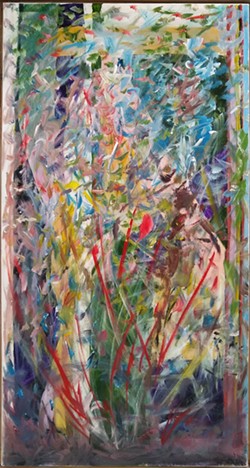 "Indeed, abstraction appeals to me because it frees me to do whatever I want and viewers to react as they will," Sosna added. "I've listened as they comment to my work, some see objects or people, others see landscapes, oceans. One viewer saw 'accidentals,' unexpected brush strokes similar to accidentals in music. It's all unintended, which makes it more fun for me as I hear what they see.

"Besides, I'm a terrible draftsman, can't saw a straight line in carpentry," he continued. "I'm in awe of the Dutch masters whose bowls of fruit look photographically real, I find beauty in Monet's waterlilies, and strength in Rembrandt's portraits. But my mind buzzes when I stand in front of a Diebenkorn landscape in his Ocean Park series, and it explodes facing de Kooning's powerful interconnected pieces of color and movement. Realism fades before such imaginative works."

Looking again at his bio and explanation of his technique, he seems to be engaged in a form of automatic painting, which some believe expresses the unconscious. However, he doesn't see it that way.

"I reject the term 'automatic painting.' It implies a machine-like process: push a button and something happens. Or set a clock and the coffee maker will start. It suggests there's no discipline at work," he said. "I paint with very few restrictions, almost none, but there's an overarching plan that a painting will emerge, that my brush and palette knife will move the pigment over the canvas, I'll step back, look at it, return to it, keep at it until it's done.

"Through it all, my brain is working alongside the brush and palette knife, seeing what they're doing, using its judgement, telling me that it's good, or no, not that stroke, it needs more red or less green," he continued. "The brain knows when it's done. At the end, it's exhausting."

Like poetry, abstract painting seems to invite more intellectual participation by the viewer than, for instance, realism, impressionism, or pop art. People interpret abstraction in very personal ways. Is that why Sosna's drawn to it?

"There's a similar process in poetry, at least in the poems that I write," he said. "I start with a line, a thought, some wild idea, know that a poem will be there at the end, have no image of what it will say, how long it will be, or how it will get there. Across endless mind-space, I reach for words, change directions and go back, change again, and at the end, there's a poem. As open as the process is, there's still a structure: punctuation, lines and spacing them, stanzas all come about as the writing goes on. There's another similarity. Poems are meant to be read aloud; paintings are meant to be seen. The opportunities for either are rare and thereby valued all the more."

Sosna is the perfect example of how staying creatively active keeps you young.

"One more thing: 93. That's more than a number. I know I'm super fortunate to be able to do what I do and delight in doing it," he said. "My life is much like my paintings and my poems: There's an end eventually, but I have no way of knowing when or how it gets there." Δ