The last time Morro Bay residents saw a bump in their water bills, a gallon of gas in California averaged $1.74, Coolio’s “Gangsta’s Paradise” topped the Billboard charts, and Full House had just gone off the air after eight seasons. After years of stagnant water rates, however, the city plans to cut it out.

With no change to water rates since 1995, the average Morro Bay resident has actually seen a 36 percent decrease in water rates, once adjusted for inflation. This was one of a handful of insights from the Berkley-based consulting firm Bartle Wells Associates, which city officials hired to perform a water and sewer rate study.

And according to Public Services Director/City Engineer Rob Livick, Morro Bay now manages to keep water flowing through pipes into homes and businesses by drawing down its available reserves. In fact, the city’s water fund is projected to operate at an approximately $940,000 deficit this fiscal year. 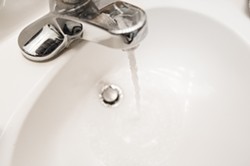 That money is funneled almost exclusively into state water, which provides nearly all of Morro Bay’s supply. According to Livick, the city only weans off of state water during California’s scheduled maintenance periods. In those times, Morro Bay can rely on a few unreliable and costly local water sources, such as its desalination plant, but must still pay its debt service for state water even when those pipes are dry.

On top of that, the city is staring down the barrel of a new estimated $75 million wastewater treatment plant, and an estimated $9 million in capital improvement costs to its water infrastructure over the next 10 years.

Just to match expenses with revenues, the city needs to increase rates by 30 percent, Alex Handlers of Bartle Wells told the City Council at a Feb. 24  study session. According to the recommendations in Bartle Wells’ rate study, monthly water bills will increase from the current average of $33.20 to $50 in the 2015-16 fiscal year. By 2019-20, the average bill is estimated to be $75.50.

City officials haven’t publicly said what led Morro Bay to sit on its water rates for so long, but they did say at the Feb. 24 meeting that a regular escalation of rates would have eased the burden on ratepayers rather than the steep increase now needed to cover costs. (Most of the council members are serving either a first or second term, and the city recently hired a new city manager and city attorney.)

“Had we increased rates gradually over the last 20 years, we wouldn’t have to be doubling them in the next five years,” City Manager David Buckingham told the City Council.

City officials are also juggling ideas to handle other financial variables. While the rates are increasing, residents have reduced their water usage as the city stretches its supply of increasingly restricted state water. Though Morro Bay residents’ ability to reduce water is positive for the city’s available supply, it’s also a potential threat to overall revenues in the future.

The City Council unanimously gave the nod to consider implementing several “pass-through costs” in the proposed rate structure. Such surcharges on ratepayers should provide leeway to cover additional costs in the event of emergency water restrictions, which would hamper overall revenues, and when the city has to run its desalination plant, which essentially doubles costs for the same amount of water.

However, members of the City Council were less eager to move forward with a surcharge to keep up with expected rises in the cost of state water. Instead, they seemed eager to back off the state supply and push more resources into local and renewable water sources, such as from a proposed water-recycling project. The city has another eight years of annual $750,000 water revenue bond payments due to the CCWA, Handlers said at the study session, after which it could potentially free up money that has previously gone into its debt service.

And while water rates have put the city in a situation that it’s now “legally obligated” to fix with additional fees, Handlers told the city, sewer rates have kept more in line with costs.

“Your water was under water; your sewer is over water by a bit,” he said.

Under the proposed rate structure, the average single-family monthly sewer bill will increase from $45.49 to $83 over the next five years.

The next discussion on water and sewer rates is scheduled to take place March 24, after which the city could begin to issue Proposition 218 notices. Under Proposition 218, proposed rate increases are implemented automatically, unless the city receives protests from a majority of ratepayers. Livick said a protest hearing will likely take place in May, and if the city doesn’t receive a majority protest, the new rates could go into effect July 1.

So far, residents haven’t said much about the proposed rate increase. No one from the public spoke at the Feb. 24 hearing, and Livick said he’s received one written response from a resident.

“We would encourage folks to comment during this part of the process rather than what I’ve seen in other cities,” Livick told New Times “People have an issue with rates once they get that first bill; really, that’s too late to express your opinion.”