For a store locator and recipes, go to wickedharvestspirits.com.

Whether you're 18 and looking for a fling or on your second marriage, the dating struggle is real. Say what you want about finding love the online way, but it has the distinct advantage of leveling the playing field. 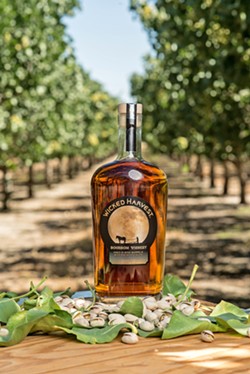 Gloria Zion met her husband, Jim, on match.com. You could say it was love at first semicolon.

"I fell in love with Jim because he could write a grammatically correct sentence," Jill said. "His bio said, 'I'm a real nice guy, and there's not a lot of us nice guys left.' I was intrigued."

The Fresno couple wed in 2011. That year, the lovebirds also purchased a beach house in Morro Bay, the sleepy coastal town that would eventually become their permanent home.

Spring chickens they were not. Both were looking for a new life adventure to take on together, but no one could have expected how great of a power couple they'd become. Doubly, no one could have ever expected that the powerhouse partnership would be in bourbon whiskey.

Gloria didn't even drink the stuff.

Jim, a Cal Poly alumnus, had already found success as an owner/managing director of Meridian Growers based out of Fresno. Gloria had climbed the ranks of the education field, working as a district superintendent, then a coach for struggling school districts, and later, a well respected university consultant.

So how did a top-tier agricultural businessman and a semi-retired star education guru get into the booze-making biz?

As it turns out, life has a way of putting you on the right track. All you have to do is look around and see the opportunities presented.

See, Jim sits on the Cal Poly Food Science and Nutrition Advisory Board. During a conference at the college a few years back, he got to talking to the guy in the seat next to him (that would be none other than master distiller and fellow Cal Poly alum Stephen Thompson).

They talked as red-blooded guys do, about farming, weather, soil, and drinking. Thompson was retired and had decided he was only going to do fun projects that he actually liked.

"Before we knew it, we were shipping pistachios out to Kentucky. A few months later, we were on a plane to try our first few iterations of pistachio-infused bourbon whiskey."

Number one, Jim and Gloria have a lot of them at their disposal. Secondly, it hadn't been done—so why not then and why not them? Thirdly, the couple suspected the healthful oils would give the final product a smooth finish.

"When Steve asked, 'Have you ever tried using them in bourbon before?' We thought, 'Let's give it a try,'" Gloria said.

Then things got really interesting.

With their product, Wicked Harvest, they knew they had a fresh idea in a category all its own. But what if they finished the pistachios in used wine barrels? Would it be overkill or just that extra kick that gave the spirit a totally unique twist?

"I'd been a wine enthusiast for my entire life," Gloria said. "I thought, 'This is a product I'd be willing to try because it has two things that I love: pistachios and wine.'"

Gloria added that Wicked Harvest goes down incredibly smooth, perhaps even "a little too smooth sometimes."

Before we get any farther, I must say: This is not some silly "flavored" drink or frivolous fad.

The couple starts with 5-year-old Kentucky straight bourbon—crafted from a special mash that took nearly two years to perfect. Whole pistachios are added to oak wine barrels to give the product its remarkably distinct flavor.

Everything is crafted in Kentucky, at a boutique distillery.

The final product is premium, and the price tag reflects that. As Gloria says, "it's for sipping, not shooting."

You might see vodka with lemon and marshmallow or "maple" whiskey on the shelves, but as Gloria warns, "Those are flavored things, and flavoring is in a lower category. We are infused, and we aren't competing against any other bourbon, because there aren't any others like ours."

It took time and toil to get this offering just right.

In fact, it took 30 iterations in all. The couple has done everything themselves, from researching laws on labeling and exporting from out-of-state to creating their own distribution company.

"After all that, and getting our product here, we thought, 'OK. Now what do we do?" Gloria said. "We had 300 cases on that first run. So, I just packed up my car with bourbon and went to all the cool places. I wanted to take it to all the places where you can buy alcohol or drink alcohol. We are now in 50 locations on the Central Coast and in the Central Valley, plus we just got cases into Oregon."

Gloria said their spirit isn't just different, it's an homage to their farming friends back in the valley. She said nut farmers and friends are buying up product left and right. It doesn't hurt that Christmas is a fine time to share and celebrate with a cocktail.

She said it's also been a blessing to not only work with her husband, but for herself for the very first time. She just celebrated the birth of her third grandson and was able to take off a few weeks, just for the joy of it.

Back at the grindstone, she's hitting the pavement hard, bringing her bourbon whiskey to anyone who will taste, mix, or swirl it.

You can grab a sip or a bottle from stores and bar tops spanning San Miguel to Grover Beach.

"It changed my life, and it's fun for Jim and I, something we have done together," she said. "There are no other partners in this, but at the end of day we get to work on a project together."

Although you can pour this fine bourbon whiskey into an exceptional eggnog imbued with espresso, coffee bean shavings, and frothy egg white (check their website for recipe), it's also stunning on its own.

"I had never been a brown spirit drinker my entire life, and now, here I am," Gloria said. "I sip mine straight with a single ice cube."

As Mark Twain so wisely said: "Too much of anything is bad, but too much good whiskey is barely enough." Δ

Hayley Thomas Cain is ready for a nightcap. She can be reached at hthomas@newtimesslo.com.