In recognition of the significant hardship imposed by the novel coronavirus on Morro Bay residents, the business community, and city finances, the city created the Rock Solid Together plan to preserve essential community services and support its businesses.

Morro Bay City Manager Scott Collins told New Times the city has a tourism-based economy, and local businesses have made sacrifices to ensure that the area doesn't have a major spread of the virus in the community. 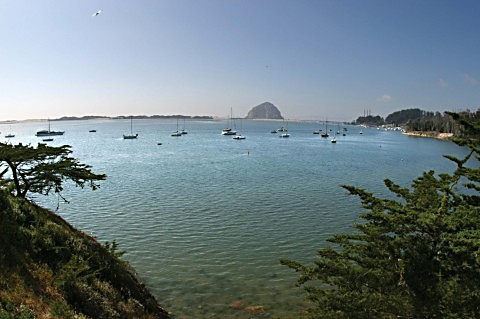 "But with those sacrifices come major economic and financial fallout, whether it's closing their business, laying off staff, or things like that, which are, I can only imagine, how challenging," Collins said. "So we want to do what we can to assist them like all of the cities in the county here are doing."

"So we just said, 'Hey, all we have control over is our community,' and that's sort of where Rock Solid Together came from," he said. "I think our view is that the community is going to have to turn to their government even more so than in the past."

To ensure the city's doors are still open to provide those critical services, Collins said, the city looked internally on ways it could take immediate action.

In that spirit, Mayor John Headding announced on April 6 that he and his fellow City Council members would forgo their stipends for the remainder of this year and will assess waiving them next fiscal year as well.

Collins said he and department heads have taken immediate salary cuts of up to 8 percent. The City Council invoked the city's short-term fiscal emergency plan, which includes freezing hiring and non-essential travel.

He said the city must be responsible using its emergency reserves in order to ensure that it's prepared for any future medical or catastrophic emergency, including preparing local police and fire departments by preventing service reductions and maintaining rapid 911 emergency response times.

On the local business end of things, Collins said the Morro Bay Chamber of Commerce extended its services to all business owners—member or not.

Erica Crawford, president and CEO of the chamber, said the organization took a nod from publications that are lifting their paywalls in order to provide information to anyone who needs it.

"To that extent that I've just put my direct cellphone number on all communication that's going out and people are calling me directly. That's great. I will talk to anybody," Crawford said.

She said thanks to existing chamber members who are still able to pay their memberships, she's still able to be a resource to any and all business owners.

With the exception of one staff member helping Crawford relay updated information about what local businesses are doing, changed hours, or specials via social media, Crawford has had to lay off her staff.

"The virus is the ultimate common denominator. We're all at the whims of a public health crisis and none of us have certainty, and we're all making difficult decisions about how to operate our businesses," she said. "If at our core in a moment of crisis we're worried about somebody else, I think that bodes well for the future."

City staff is preparing a long-range fiscal strategy to present to the City Council at the April 28 meeting. Δ