At the beginning of each Morro Bay City Council meeting, councilmembers are given time for general comment. On Nov. 13, City Councilmember John Headding took the opportunity to open up a conversation about previously uncounted Proposition 218 votes on the sewer rate increase. 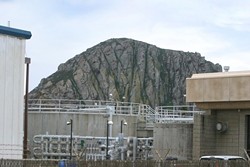 "In speaking with a large number of constituents in regards to the WRF [wastewater recycling facility], we feel that there can be a healing motion that would begin to repair this torn relationship between the two factions," he told New Times.

On Oct. 23, residents opposing the city's water reclamation project challenged the city's refusal to count some Proposition 218 votes on whether to fund the $128 million facility.

Residents alleged that the city declined to count approximately 1,000 votes in protest of the Sept. 11 water and sewer rate hikes ($41 per single-family household).

The city stated that the votes in question were either undated or marked with a date that was prior to when the public notice was issued about the proposed new rate increase and opened the protest period, which disqualifies them.

Headding said he wanted to make it clear that if the discussion were to be agendized the votes could potentially be tallied and the results made known to the public. However, the votes would not count toward the water and sewer rate hike protest, as the determination has already been made.

Headding said it was a first step to begin the process of trying to re-establish a solid foundation of communication between the city and its residents.

"We have to move forward; we've got to work together and listen to one another. It doesn't mean we always have to agree, but it certainly means we can amicably discuss issues and passionately express our opinions and not have that passion go toward finger pointing to individuals," he said.

During public comment, Morro Bay resident Aaron Ochs, founder of the group Save Morro Bay—a group that formed in opposition of the proposed water reclamation facility—said he was pleasantly surprised by Headding's motion, but the group is already taking matters into its own hands.

"Save Morro Bay is counting and validating all the protests submitted to the city, and we hired an attorney to conduct the process the city has previously refused to do," Ochs said. "To ensure fairness and transparency, we believe all votes should be counted."

The meeting ran until 11 p.m., so the council voted to continue its remaining agenda items to the next regularly scheduled meeting slated for Nov. 27. Headding said that he will move to agendize the protest votes discussion at that meeting. Δ