Morro Bay Harbor's residents say they aren't opposed to paying service fees, but they are against proposed fee increases for the use of harbor facilities.

Anastasia Ruttschow, a liveaboard (meaning she lives on her boat) off Tidelands Park, spoke against the fee hikes during public comment at the Sept. 5 Morro Bay Harbor Advisory meeting, where the board was gathering community input about a potential increase in the monthly fees for mooring and city slips.

Ruttschow said that the trash can designated for liveaboard use doesn't open wide enough for a full bag of trash, so she doesn't use that amenity. She also said that she only fills up her 118-gallon tank with water once a month. Her biggest issue is the shower at the public restroom site. She said that it isn't reliable, the water is almost always cold, and she has to deposit a quarter for two minutes of use. 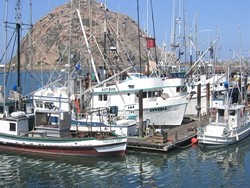 "I would like to say that I don't even feel safe using it at night," Ruttschow said. "I have been in the shower at night, and men have come inside and knocked on my door, and it's a bad situation to be in."

Several other public commenters echoed Ruttchow's comments about minimal use of the services that they pay for and said they didn't understand how the increase calculations were made.

The current service fee for mooring is $17.40 per month, and the proposed rate would increase that to $90 to cover a portion of utilities, trash, bathroom maintenance, and pump-out station.

The current service fee for city slips is $35.80, which could rise to $100 to cover electricity, water, trash, bathroom maintenance, dock maintenance, and a portion of the pump-out station.

The proposed increases are part of a city-wide review of its current fee schedule, calculation of the total cost of fee-generating services, and the cost recovery levels for each fee.

The advisory board elected to postpone its recommendation until a representative of the livaboards meets with the city about the fee structure and their concerns.