Morro Bay just got what every city needs—a butcher shop

Photos By Jayson Mellom MEAT EMERGENCY Geoff and Jillian Montgomery and Evan Martz (left to right) opened the Morro Bay Butcher and Deli in December 2020 to serve local, high quality meat and more to the community.

Morro Bay Butcher and Deli is at 911 Main St., morrobaybutcher.com, and @morrobaybutcher on Facebook and Instagram. It's open Tuesday through Saturday from 10 a.m. to 7 p.m.

Morro Bay Butcher and Deli aims to bring customers meat that's as local as possible and handled as little as possible.

Butcher Geoff Montgomery, who opened the butcher shop and deli in December 2020 with his wife, Jillian Montgomery, and their friend, Evan Martz, said his goal is to be 75 percent local in the case by the end of the year.

Currently, some of Morro Bay Butcher and Deli's beef comes from Molnar Cattle LLC out of Cayucos and Rudnick Land and Cattle Co. from the Central Valley. Autonomy Farms out of Bakersfield supplies pasture raised, all natural, antibiotic- and hormone-free chicken. And the butcher shop is currently getting its lamb from New Zealand's Coastal Lamb. You can also find pork and venison—and look forward to the future, when Geoff plans to bring in some duck. 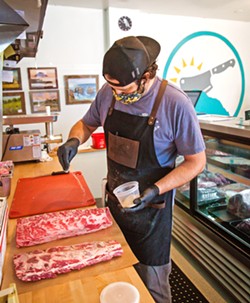 He said the shop is working with an Edna Valley ranch to raise some piglets and is looking to work with suppliers that handle the meat as little as possible between the farm and his butcher shop case.

"I think that we've become disconnected with our food in a lot of respects, and in my opinion, one of the ways to rekindle that connection is to work with local suppliers and be able to trace the products that I'm selling all the way back to the source," Geoff said.

Molnar Cattle, for instance, does very minimal processing of its beef. He said it's almost direct-to-consumer. The cattle goes from the ranch to the processing facility to the shop.

While Geoff focuses on the meat, his wife Jillian curates the cheese, charcuterie, spice blends, and other local products on hand in the deli portion of the shop while Martz takes care of sandwiches and other deli creations. Alle-Pia salami, Central Coast Creamery Goat Gouda, and Stepladder Ragged Point Triple Cream sidle up alongside house-ground sausages, roasted fingerling potatoes, and asparagus salad. Regular sandos include pesto chicken, braised beef, and cold pork shoulder.

Martz said if Geoff has some leftover tri-tip or tenderloin, they just roast it up and put it in the case for people to buy.

"It's quick and easy, no hassle, and it's all within the same building," Martz said. "Everything is fresh, small batch. I try to do it every day to minimize waste and leftovers."

Geoff and Jillian moved to Morro Bay a little more than three years ago after spending 10 years in Jackson, Wyoming, together. Geoff grew up in Jackson and went to Eckerd College in St. Petersburg, Florida, where he met Jillian, who grew up in Wisconsin and also attended Eckerd.

"For me, personally, 30 years of living in a nine-month winter and three-month summer was starting to take its toll, and Jackson was getting to the point where it was no longer the town it was when I was growing up," Geoff said. "Morro Bay is kind of like Jackson was when I was growing up. ... It's got that community feel that we had lost in Jackson."

Jillian suggested the couple move to Morro Bay because it felt like a place where they could raise a family and be a part of the community. Everybody, she said, has been so welcoming and supportive of them.

"I couldn't imagine opening anywhere else," she said. "We've lived in so many different places that it's crazy."

Morro Bay, she said, has the best of both worlds, with the ocean on one side and coastal range on the other.

Both worked in boutique grocery stores in Jackson. Jillian worked in the front of the house in customer service and brought things like local and statewide cheeses into the store. Geoff managed a couple of stores that had full butcher shops, breaking down whole animals into the bits and pieces that customers want to buy. The focus was always on high quality, local products, he said.

When they moved here, he initially worked for Tesla for about nine months before getting laid off, which made him realize that the corporate life wasn't for him. So he found his way to the Arroyo Grande Meat Company, where he worked for a couple of years, learning about the area, meat, and gaining more experience with whole animal butchery—until they decided it was time to open a shop of their own.

Once they made that decision and found a place, the next step was to make a phone call to Colorado. Martz and Geoff attended high school together in Colorado Springs at Fountain Valley School, and they stayed in touch over the years, catching up at a high school reunion where the Montgomerys talked about the dream they had of moving to Morro Bay and opening up a spot of their own.

"And he turned around and said he'd had a really similar idea to do something like that in Colorado," Geoff said of Martz. "And so I knew he was relatively on the same page as I was when this business was concerned."

Martz also worked in the food industry, managing bars at higher-end steakhouses like MacKenzie's Chop House in Colorado Springs. He said he would help out in the kitchen whenever he could and his best friend was the head chef. Martz loves to cook and has a constant stream of cooking shows on in his free time.

At the time when the Montgomerys made the ask in September 2019, Martz had just helped open up a bar and was between that gig and the next. Geoff said he had a whole speech mapped out for how he was going make the ask and how much time Martz might need to mull over the proposal.

"I was immediately like, 'Yeah, let's do this, what are we waiting on?'" Martz said he told them.

"It all happened in 20 minutes right there on the phone," Geoff said. "Eleven days later, we drove out [to Steamboat Springs] to pick up a camper, picked up Evan, got back here, and went to work."

Just as they applied for a permit with the city of Morro Bay, the COVID-19 pandemic changed the momentum of forward progress. But the trio was still able to get a lot of the remodeling work done at their spot on Main Street, turning what was once T.K.D. Surf Shop into a butcher and deli. They put some butcher paper over the windows and a sign on the wall and got to work.

Martz said before they opened the doors, they served up home-ground and spiced sliders at the farmers' market for four or five months on the corner across from their shop. Once a week, he said, they could tell the community what their mission was and hear what the community wanted out of a shop like the one they wanted to open.

"They could see that it was a small operation and let them know who we were, not just a sign on the wall and paper over the windows. They got to meet us before we opened, and I think that really helped," Martz said.

If you're in Morro Bay and you have a hankering for some protein, visit "911 Main St. for all your meat emergencies," Geoff said with a laugh. Δ

Editor Camillia Lanham is ready for a lot of meat emergencies. Send food news to clanham@newtimesslo.com.