When Dana Stein arrived in the outskirts of Houston, Texas, on Aug. 31, he found the darkness of dawn and the brown water that flooded the area ahead.

"I remember getting out of the truck and it just smelled bad, like old water," he said.

Stein is a harbor patrol officer in Morro Bay and he was given the opportunity to join a small group of volunteers formed by K38 International Rescue—a watercraft rescue and boating education organization—to offer relief assistance in Texas during a three-day mission. The state is working toward regaining its footing after Hurricane Harvey devastated Houston and other nearby areas. 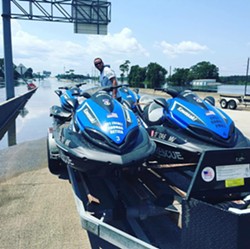 "I was expecting to see stagnant water like the aftermath of Hurricane Katrina. I was surprised to see moving water," he said.

The group drove through about 2 to 4 feet of water, with a current traveling at about 10 miles per hour.

Stein was able to rescue several people; among them were two men in a small boat that the current had sucked underneath a railroad bridge.

"When we finally got them out of the water they just looked as white as ghosts and big-eyed. They couldn't stop talking about how they almost died," he said.

Stein has seen plenty of emergency situations, but this was the first time he's seen an emergency of this magnitude.

After each rescue, the group took a quick rest before moving on to the next mission. Stein said he and the K38 group were taking a break on the side of the road trying to cool down when a woman approached them.

He helped the woman evacuate her daughter and grandchildren from their home in a nearby neighborhood.

"She was so happy; one of her sons put us up for the night, fed us, and showed us great hospitality," he said.

The appreciative and hospitable people that he encountered on the way and during his time in Texas is something that Stein said would stay with him.

"The whole way to Texas from California, we would stop for gas and people would give us a donation or just honk and wave," Stein said.