After 2015, “continued operation of the plant is unlikely,” according to a letter from a company official to Morro Bay Mayor Janice Peters and members of the City Council. And if the city doesn’t extend a current lease, the shutdown could come as soon as 2011. 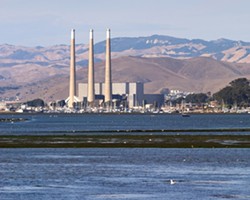 “Apparently, the way it looks, as of 2015 this kind of plant will no longer be operational or allowed to operate,” Peters said.

Meanwhile, the company is asking the city to extend a lease it holds for use of the land between its plant and Morro Rock for outfall channels used for the cooling. Without that lease, Dynegy’s Randy Hickok wrote in the letter, in 2011 “The Morro Bay power plant will be retired.”

The plant has gone unused this year because it didn’t have a buyer for its electricity. In recent years, it has been used only during peak demand periods.

Jack McCurdy of Coastal Alliance on Plant Expansion, or CAPE, said the letter symbolizes a victory in the nonprofit group’s long efforts to protect the estuary from having its waters used for plant cooling.

He said the decision also clearly signals an abandonment of plans to build a new plant on the same location.

“It’s a victory for us, because we never opposed the plant per se,” McCurdy said. “What we opposed was the design that had been advocated by Duke energy and endorsed by Dynegy,”

The decision, however, will have economic effects on a city already struggling with declining revenues. The outfall lease brings in $750,000 per year. But in 2002, when the plant was operating more often, city revenues from the plant reached $3.5 million.

McCurdy said it would have been worse for the local community if the estuary suffered as a result of continued plant operation.

“We think it’s a wonderful development and we think in the long run the city will generate more income from use of that property for other uses,” he said. “It will draw in more tourism and in that way replace the loss of whatever revenues might have been generated through the plant.”

Peters said the council is due to hold a closed-session discussion of the letter and the request for the extended lease, later this month. The plant is 54 years old.