The Morro Bay Police Department investigated an incident of hate speech that allegedly occured during a June 6 Black Lives Matter protest, as well as the officers who may have used foul language to break up the altercation. 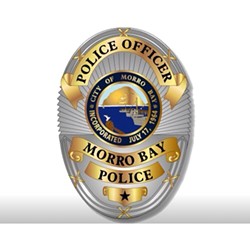 According to a July 2 post on the Morro Bay Police Department's Facebook page, an investigation that involved interviewing 15 individuals, including the officers on scene, found that a verbal disturbance occured where a counterprotester used a racial slur. The Facebook post also stated that witnesses made conflicting statements about whether one of the officers used a swear word to disperse the groups.

The investigation didn't review body-camera footage, because the cameras weren't activated during the incident.

"Unfortunately this happened so fast that the officers were not able to activate their cameras," Cmdr. Amy Watkins told New Times.

The three officers involved in breaking up the altercation were from the Morro Bay, Grover Beach, and Atascadero police departments.

"Attempts to contact the black male involved in the incident were met with his refusal to speak with the investigator or to provide a statement related to this incident," the post read.

Britney Holloway, the wife of the man on the receiving end of the racial slur, said that when the June 6 march approached the Great American Fish Company, three men were yelling "All Lives Matter" and revving their engines.

When Holloway and her husband, who was holding their 1-year-old son, walked by the men, one of them called Holloway's husband a "bitch," she said.

He "turned around and said, 'What did you say?'" she said. "The guy said, 'I feel sorry for your son being a nigger.'"

She said her husband handed her their son and an argument started. Holloway said the officers who arrived didn't bother to break up the argument.

"I, with my son in my hands and holding my dog on leash, jumped in-between them and told my husband that it was not worth it, and we needed to leave," Holloway said.

As they were leaving, Holloway said her husband was still yelling at the counterprotester. She said a Morro Bay Police officer then told her husband, "Can you just shut the fuck up?"

As they were leaving, Holloway said the same police officer drove by them and said, "You can never keep it a peaceful protest."

Holloway said she spoke to both the Grover Beach and Morro Bay police departments about the incident. She said her husband didn't feel comfortable talking to the agencies because of how officers handled the situation.

"They simply watched it, like waiting for one of them to swing, and I felt like they waited for my husband to swing first, so they could just arrest him," Holloway said.

The couple was also upset by the Morro Bay Police Department's Facebook post that only spoke of the race of her husband and not the race of the counterprotester, who Holloway said was white. The department determined that nothing criminal occured during the incident.

The entire situation feels like a "slap in the face," she said. Δ