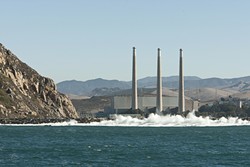 More than a decade of back and forth about whether to modernize the embattled Morro Bay power plant or let it suffer a quiet death has led to this: It appears that its days are officially numbered.

On Nov. 7, Houston-based energy company Dynegy released its third quarter earnings report that included a small snippet about the upcoming closure of the plant, set for the first quarter of 2014.

“We believe that the time has come to move beyond this legacy facility and have decided to terminate operations there,” Dynegy President and CEO Robert Flexon wrote in a letter to California Gov. Jerry Brown the same day. “However, we intend to explore how new resources, such as distributed generation or storage, may be able to take advantage of the location of the existing site.

“I also want to assure you that Dynegy is taking every step to support and protect our valuable workforce with beneficial severance packages, and where feasible, potential employment at other Dynegy facilities,” Flexon continued.

The plant is currently staffed by about 40 employees, according to the company.

Dynegy Spokesperson Katy Sullivan told New Times that the plant is expected to cease operations in late February, barring any unforeseen action by state regulators. Sullivan said she didn’t yet know what would become of the site, however.

“At this point, we’re exploring various options for the site, and there are no plans to demolish [the plant] at this point,” she said. “We’re looking at other uses that involve energy production that will help the state meet its energy goals.”

The City Council approved in December 2012 a new outfall lease with Dynegy that doesn’t expire until 2017—that is, unless the plant ceases operations.

Duke Energy, which formerly owned the plant, proposed in 2000 to spend some $800 million upgrading the plant.

Though Dynegy has been a major economic benefactor to Morro Bay since it bought the plant in 2007, the plant has been a very public thorn in the side of environmentalists for more than 50 years due to its once-through cooling system—which harms marine life—and the airborne particulate matter that flows from its 450-foot-high smoke stacks.

It contributes some $750,000 in leases and other fees to the city budget each year. City officials have said that they’ve seen the plant’s imminent closure coming for a long time, however, and have set aside roughly $2.7 million in the general fund to counter the loss.

On Nov. 12, Public Services Director Rob Livick told the City Council at its meeting that staff from the county’s air pollution control district were onsite evaluating whether to issue permits for work to remove some of the air ducts between the units that the company considered possibly hazardous. No further details on that work were available as of press time.

Now the only question is what will become of the site, which was recently named as one of the lower-cost options for a new wastewater reclamation facility.