When Niko Yaroslaski was just 16, he moved to New York City for the summer to dance ballet. Raised in Morro Bay, he went from a small-town upbringing to "living alone for six weeks," he said in an interview. "It was really wild."

Now 20 and no longer a stranger to the city life, Yaroslaski recently moved to Portland, Oregon, to pursue professional ballet with Oregon Ballet Theatre, an achievement that most dancing hopefuls find elusive.

Despite how competitive it can be to make it, Yaroslaski had his pick. 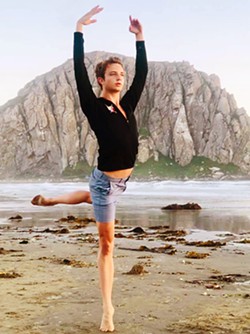 It was at Ballet West, a Salt Lake City company he trained with on full scholarship for the last three years, where Yaroslaski fell in love with the prospect of dancing professionally in Portland.

"Oregon Ballet Theatre came to the National Choreographic Workshop that Ballet West holds," he said. "Just watching them work onstage and seeing how their dancers perform, I knew I would love to work for them."

While he is just getting settled into life as a professional dancer, Yaroslaski's avidity for the art form started young.

"I started dance when I was about 4," he remembered. "My parents had this VCR recording of River Dance, and I would dance along to it when it was on the TV, so my mom put me into dance."

When he was 13, Yaroslaski started dancing with the Ballet Theatre in San Luis Obispo, and ballet quickly became his focus and passion.

"After that, I moved to Academy of Dance when I was 15 or 16, and that's when I started training more seriously," he said. "I realized I wanted to do it as a job when I was 16, when I went to New York for the first time. That was my first look at what it would be like as a professional, and realized it was something I did want to pursue."

After experiencing dance studios on the Central Coast and in New York City, Seattle, Phoenix, Salt Lake City, and Kansas City, Yaroslaski emphasized how different ballet can look depending on where someone's dancing or who they're dancing for.

"On the Central Coast it's a lot more homey, and feels like everyone's a family," he said. "Everyone is trying to help you to get better, but also not everyone is looking to do it as a profession or as seriously. When I moved [to New York] it honestly became more brutal and cold, so it was more challenging and less family oriented."

The trade-off, Yaroslaski said, is that big-city companies are "all about getting you to that next step" in the industry.

Ballet also can vary in how much it sticks to tradition, Yaroslaski said.

"In certain companies more than others, for a male they are supposed to be more stiff, a lot more manly and muscular," he said. "They're supposed to lift the girls and show the girls. That's good, but I feel like it should be changed so a man can express himself more with a feminine quality if he wanted to."

Many ballets that Yaroslaski performs were choreographed decades, even centuries, ago.

"Everything is very old-school in terms of gender roles. A male does this, a female does this," he said. "It's beautiful, and the story lines are stunning."

But Yaroslaski also sees the need for "some new works so that we aren't just showing what's not so relevant anymore."

Despite ballet's traditional tendencies, Yaroslaski has no problem pushing back on gender norms in the industry.

"I've actually danced on pointe a little bit myself," he said of the dance shoe conventionally reserved for female ballerinas.

It's this freedom to express himself onstage that he thrives on.

"All the emotions you can put out onstage, and the characters you can play, are just amazing," he said. Δ