On July 14, the Morro Bay City Council unanimously rejected the appeal of an affordable housing project that took issue with the project's size and parking criteria. 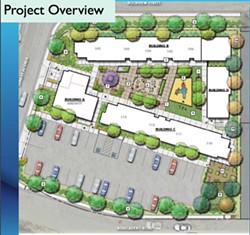 The Housing Authority of San Luis Obispo-sponsored proposal for 405 Atascadero Road is slated to have four buildings with 35 units, a lobby and laundry area, an outdoor courtyard, playground, and raised garden beds. The transit amenities include 35 parking spaces—two accessible spaces and two electric vehicle charging stations.

Morro Bay resident Betty Winholtz appealed the June 2 Planning Commission approval of the project, asking that the project be returned to the commission with design modifications.

Winholtz took issue with the project's two three-story buildings not having an elevator, a lack of onsite parking, unidentified electric vehicle parking, and building heights greater than two stories.

Councilmember Robert Davis said that many of her concerns were addressed at the Planning Commission meeting where the project was approved.

"The lack of low-cost housing is a national crisis and especially here in San Luis Obispo County. Our Regional Economic Action Coalition has identified the lack of affordable workforce housing as the No. 1 barrier to job creation in Santa Barbara and San Luis Obispo counties," Davis said during the July 14 meeting. "To me, this is a model project that works toward meeting the critical need for workforce housing." Δ