On Nov. 17, the City of Morro Bay terminated a 36-hour notification to citizens regarding sudden unsafe nitrate levels in the drinking water. 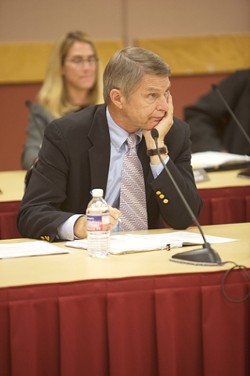 # Three weeks after the incident, a growing number of residents are complaining that city staff issued the warning a day late and recalled it prematurely possibly by as much as two weeks. Several residents contend that a public safety threat began when city engineers recently started pumping to determine whether a petrochemical plume would move into adjacent wells.

This all came out at the Dec. 11 meeting of the Morro Bay city council the first adjournment of the newly elected board.

Parents described witnessing stomach pains in their children, and respiratory issues experienced by several elderly individuals were anecdotally linked to the nitrate spike. Several parents brought their children to the council meeting.

"A lot of the kids that were here left early because they have things to do getting to bed or trimming the tree," said the Surfrider Foundation's Matt Fleming, referring to a pre-meeting award ceremony for the winners of a K-12 art contest. "These kids would be doing the same. Instead they're here policing their own water quality."

City staff contested the assertion that the nitrate levels remained at unsafe levels for a longer period than the advisory was in effect. Capital Projects coordinator Bill Boucher said that the spike came without warning, and Morro Bay switched to state water as soon as staff detected nitrate levels above the EPA threshold of 45 milligrams per liter.

Parent Dawn Feuerberg correlated the overpumping with a suspected desire for the city to relieve Shell Oil of its requirements to mitigate for a Methyl tert-butyl ether (MTBE) spill detected by hydrologists in 1999.

"We're not playing fast and loose with public safety," retorted Boucher, who explained that the test pumping predated the state water shutdown by several weeks.

A representative from Shell Oil was unavailable for comment as of press time.

Whether or not the oil company will remain legally bound to its cleanup chore in the years to come depends on whether researchers can detect movement in the semi-soluble plume. That's why Morro Bay recently began pumping its wells.

City engineer Frank Cunningham said that the city "was pumping the wells as hard as [it] could," but disagreed that the frenzied action jeopardized public heath. He also strongly disagreed with the alleged motive and countered that the intention of the pumping was to collect data for the next time Shell Oil lobbies local regulatory agencies to escape its mitigation requirements.

Upon discovery of the plume, the city designated roughly 100 wells as "test wells," not used as sources of drinking water.

In the weeks following the recent nitrate warning, hydrologists working with the city detected nitrate levels in the drinking water around 19 milligrams per liter well under the legal limit, but still well above average.

For the non-Ososites in the room, nitrates constitute a breed of contaminant that proves especially perilous to infants and typically enters water sources via mammal waste or chemical fertilizers. Across the estuary, nitrate contamination rendered the upper aquifer of Los Osos' groundwater table unpotable and spurred the Regional Water Quality Control Board to press the issue of a sewer plant.

Critics of the water board pointed to the sudden spike as further reason to question the agency's assessment that leaky septic tanks caused the nitrate contamination in Los Osos. Unlike its neighbor, Morro Bay has no septics.

Activist Joey Racano of the Ocean Outfall Group called upon the water board to draft a comprehensive region-wide plan to monitor and manage, among other things, groundwater nitrate levels.