By most accounts from sources at Morro Bay High School, Johnny Hammerlund is one “sharp” high school senior. So sharp, in fact, the student webmaster once spooked San Luis Coastal Unified School District officials into blocking access to the school’s own website. 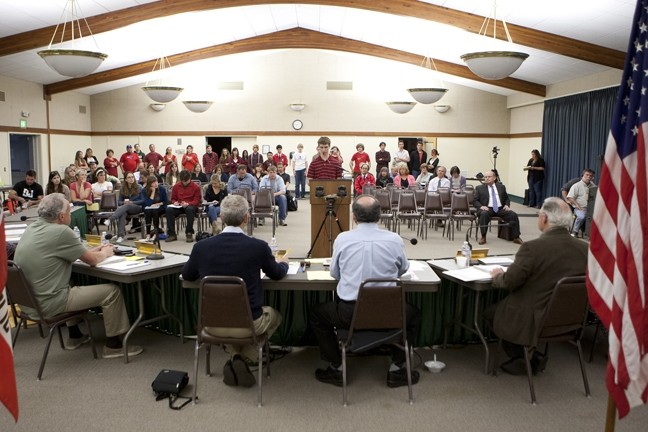 On April 24, roughly 30 of Hammerlund’s fellow students stood behind him in support as he addressed District Superintendent Eric Prater and the school board, accusing them of harassment after he successfully created a mobile phone application that links students to school-related information and events.

About four months ago, Hammerlund—who, as part of his curriculum, is acting as the school’s student website coordinator—created an application that allows students to check their block schedule, provides a countdown timer and alarm synchronized to the school clock, tracks periods and individual schedules, and offers a link to the school website and students’ grades.

According to Hammerlund and some of his supporters, the app is helpful and popular, and approximately 55 students currently carry it on their phone. He has met with the district’s IT Department and hammered out small kinks along the way.

But problems arose between Hammerlund and District Assistant Superintendent of Business and Support Services Russell Miller when the student linked the bulletin from the school’s website to his creation so students would have up-to-date event information.

According to Hammerlund, doing so set off a string of accusations, ranging from stealing district property to stealing his course instructor’s password and hacking into the district’s server. The instructor couldn’t be reached for comment.

In a response to complaints Hammerlund made at a board meeting in March, Miller sent him an e-mail demanding he cease pursuing his “app business” with “district property.” Miller said that district staff had to spend hours trying figure out if the app is dangerous to their network.

“At this time I have no intention of pursuing the recovery of those costs,” Miller wrote in a March 29 e-mail. “But I assure you that if you continue in your efforts I will proceed without hesitation to make it very difficult for you and your app to succeed.”

Now Hammerlund claims he’s been threatened, that his ability to graduate is at risk, and that his “supportive” principal, Dan Andrus, is under pressure from the district to discipline him.

Andrus could not be reached for comment as of press time, but Miller told New Times that neither Hammerlund nor the principal are in any danger of disciplinary action. When asked about his e-mail to the student, Miller said it wasn’t meant to be threatening, but he emphasized that linking the school bulletin wouldn’t be allowed.

Miller said he was limited in his ability to discuss the issue because it involves a student.

Hammerlund, meanwhile, says the district doesn’t understand the “simple” technology behind the app, and they fear he could “backdoor” the district server—a claim he said is ridiculous.

“I just wanted to take my work that I’ve done in school a step farther, give students something they can use,” Hammerlund told New Times. “But honestly, I enjoy modern technology—and that’s all this is.”