The City of Morro Bay is no stranger to raising awareness for a slew of issues from autism to tourism to bikes. Since the new City Council took the reigns in January 2011, the city has issued 10 proclamations for “awareness.”  But if the local commercial fishing community has its druthers, the city won’t recognize “Sea Otter Awareness Week.” 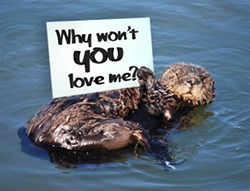 While soliciting support for their national campaign to raise awareness for the plight of the threatened sea otter, the nonprofit conservation organization Defenders of Wildlife asked Mayor Bill Yates to place an item on the City Council’s agenda to designate the last week in September “Sea Otter Awareness Week”—just as the city has for the past six years.

In their first interaction with the new mayor and council, however, the Defenders were taken aback when they got a polite “pass.” In an e-mail response, Yates rejected the group’s request, citing opposition from the Morro Bay Commercial Fisherman’s Association.

“The overwhelming message from the [association] is: Do not pass this proclamation,” Yates wrote in an e-mail to his colleagues and the Defenders. “To say their feelings are strong would be an understatement.”

Yates supported his decision by citing the city’s “unequivocal” support of local fishermen in the past. In his e-mail, he noted that if any two council members disagreed with his decision, he would allow the item on the agenda for the Aug. 23 meeting. As of press time, there was no dissenting opinion.

Current population estimates indicate there are roughly 2,700 otters in California. Jim Curland, a marine biologist and otter expert with the Defenders, told New Times the population has taken a hit in recent years from disease and habitat degradation.

“This just caught us by surprise that they weren’t even interested in a response from anyone in the community other than the fishermen,” Curland said. “If the mayor wanted to do a true pulse of the people that live in Morro Bay, I think he’d find there’s a great interest from people that like to go kayaking or boating. I think that using just a gauge from the fishing community isn’t a fair pulse.”

Curland said the organization has faced similar opposition in other cities in the past, and that many fishermen see the sea otter as a nuisance at best and sometimes competition, based on its shellfish diet.

“I think it might be a little shortsighted to talk about the losses to the fishing industry because of the otters,” Curland said. “The fact is they have to look at the big picture and the otter’s role as a keystone species for the environment, as well as their economic role as far as promoting ecotourism.”

Councilman Noah Smukler told New Times he wanted to support the proclamation, but admitted it could be tough to gather support from his fellow council members without appearing to slight the fishermen. Smukler also said that in light
of the city’s efforts to boost tourism, promoting the local otter population just makes sense.

“The otters are an important indicator species that many locals and visitors really enjoy,” he said. “This just doesn’t seem consistent to me.”

A Fisherman’s Association representative could not be reached for comment.

According to former mayor Janice Peters, resident sea otters are a benefit to local tourism. Making such a proclamation is, in reality, only a symbolic gesture, Peters said, but one she and previous council members seemed happy to make in the past.

Peters admitted the issue is sensitive and something that showcases the tight balancing act the City Council has when considering the interests of the fishing community as well as the environmental community.