Morro Bay is collaborating with local agencies and organizations to conserve its dog beach, and in doing so, the city is renewing a relationship with the Cayucos Sanitary District. 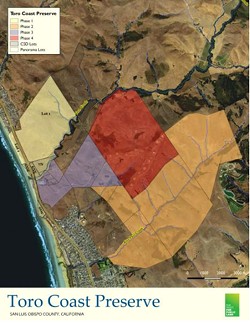 "Especially on a nice weekend, I mean there is just so many dogs and their owners out there [on the dog beach] enjoying themselves," Morro Bay City Manager Scott Collins told New Times. "It's pretty fun to watch."

This strand of beach, located between Morro Bay and Cayucos off of Highway 1, is a place the community has expressed a desire to continue having access to.

At its Jan. 14 meeting, the City Council unanimously approved a nonbinding memorandum of understanding (MOU) between all players.

The MOU outlines that the Trust for Public Lands will purchase the property, which currently belongs to the Cayucos Sanitary District, and convey it to the city of Morro Bay through a donation agreement via direct deed.

Currently, the property has a residual rights clause that gives Chevron the liberty to repurchase the lot within two years.

As part of the MOU, the city is also amending its sphere of influence to include five lots above Panorama Drive in Morro Bay—the lots are owned by Chevron.

The company intends to terminate the residual rights clause and annex the lots above Panorama Drive into the city if the lots can accommodate one single-family home each. The homes would be restricted to the lower portions of each lot, leaving the remainder of the hillside above Panorama undeveloped—which Collins said is what the community has approved.

He said partnering with the Cayucos Sanitary District has been a positive working relationship, which will pave the way for future collaborative work when both entities eventually break away from co-owning the current wastewater treatment plant.

Since the 1950s, the beach communities shared a wastewater treatment plant and a joint powers agreement, but a 2013 project permit denial by the California Coastal Commission changed that. After the denial, Cayucos and Morro Bay didn't see eye to eye when drafting a new joint powers agreement and decided to work on separate treatment plants for their respective communities.

"I can't speak to the past, and I also don't think there's value in looking back. Now it's about looking forward and how do we work together," Collins said.

Cayucos is currently building its treatment plant, and Morro Bay recently secured the funding for its project.

City staff will return at the Jan. 28 meeting to seek authorization to submit SLO Local Agency Formation Commission (LAFCO) applications to move forward with the plans outlined in the MOU. Δ