Morro Bay, Vistra enter agreement that could result in the removal of iconic stacks

The Morro Bay Power Plant site has gone unused for the last eight years, but a new agreement between site owners, Vistra Corp, and the city of Morro Bay could lead to new use and removal of the stacks. 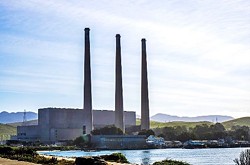 On June 9, the city approved the agreement, which would allow the city to purchase easements from Vistra for the Water Reclamation Facility project at a cost of $1. The agreement also requires Vistra to tear down remaining power plant structures by 2028 or pay the city $3 million and opens up the opportunity for Vistra to potentially redevelop the old power plant site.

Morro Bay residents will get the opportunity to participate in a discussion about the future of the site that includes giving input on whether the city should require Vistra to keep the site's three 450-foot-tall exhaust stacks.

During the meeting, City Manager Scott Collins said that the existing turbine building used to create power and the exhaust stacks are the main structures that remain from the old Pacific Gas and Electric (PG&E) power site.

"The turbine building and the stacks have what some would say historical value and others would say has the opposite. Beyond that, it has contamination issues, asbestos and other things, inside the facilities, which makes it very expensive to reuse and is a challenge to anyone that's considering redevelopment," Collins said.

Vistra proposes converting the site into a 22-acre, 600-megawatt battery energy storage system that would provide a power supply to 450,000 homes. The company submitted its permit application in January and is currently going through the application process.

In 1998, Duke Energy purchased the oil-powered turned natural-gas-powered plant from PG&E with the intention of turning it into a gas turbine plant. According to a staff report, the effort was unsuccessful for a variety of reasons, including a movement to decommission older carbon-emitting power plants.

City staff conducted an analysis of the site and found that it has limited reuse options given a PG&E deed restriction that forbids the plant owner from developing the property for anything other than industrial use; significant cleanup costs to make the site useable for non-industrial uses; the cost to purchase the land; and a legal liability that allows the city to purchase the power plant site for $1 in 2033.

Collins said the California Department of Toxic Substance Control has also determined that portions of the site may be limited to industrial use due to shallow groundwater contamination and soil concerns. Development can't occur until the site is analyzed and the contamination is remediated, he said.

Morro Bay Mayor John Headding said this is a good move in propelling the community forward.

"I believe that Vistra is not only a capable willing partner but also is a partner that is committed to advancing the interests of Morro Bay. I believe that, in my heart of hearts," Headding said. Δ