Morro Bay wind farm project is back in motion

An offshore wind development project off the coast of Morro Bay was halted by the U.S. Navy in 2018 because the designated area conflicted with naval operations, but the project is back on track after reducing its size.

On May 25, U.S. Rep. Salud Carbajal (D-Santa Barbara) joined the White House in announcing an agreement on the size and scope of leasing to allow for offshore wind development. The agreement identifies an area of development approximately 17 to 40 miles off the coast of northern San Luis Obispo County. 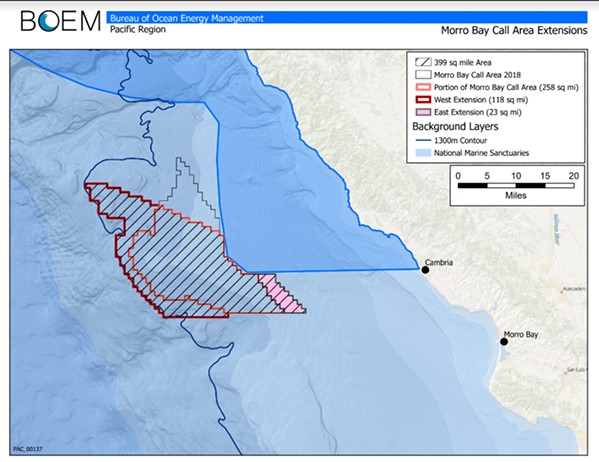 The Navy stalled the project in 2018 after it released a map and compatibility assessment in late 2017 that indicated conflicts in federal waters along the Central Coast. Proposed wind turbines were slated for installation outside of state waters, which end 3 miles from the shoreline.

In an effort to work with the Navy, and ultimately establish the agreement, in 2019 Carbajal created the Offshore Wind Working Group that included representatives from the offices of Carbajal and U.S. Rep Jimmy Panetta (D-Carmel Valley), the National Oceanic and Atmospheric Administration (NOAA), Bureau of Ocean Energy Management (BOEM), Department of Defense, Department of the Navy, and California Energy Commission. Carbajal was able to secure a written commitment from the Navy that included a willingness to collaborate with the congressman's Offshore Wind Working Group to identify an area for development that would meet energy production goals.

The next phase of the process involves an environmental impact review and a public comment period.

The study team believes that in addition to critical grid infrastructure, a nearby port is necessary to enable the development of an offshore wind industry on the Central Coast.

Morro Bay Mayor John Headding said during the May 25 Morro Bay City Council meeting that he's grateful for all the work that has been done, which will translate to "something very great for not only the state of California with regard to renewable green energy but also for the city of Morro Bay in terms of tremendous potential opportunity for economic benefit." Δ