When your liver has naughty dreams, they take place in the Libertine Pub, every time. 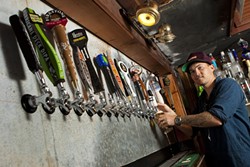 And who can blame the filthy, little organ? This waterfront tavern has beers like Cal Poly’s English Department has future fry-cooks: Too many to count, and yet each one is a special snowflake. At any given time, there are 20 sudsy brews on tap—familiar flavors like Blue Moon, expensive draughts like Old Rasputin, and obscure but delicious sour ales whose names no one can pronounce. In the refrigerator, stacks of bottled and canned beers make sure no one’s favorite is forgotten.

While Libertine Pub features a full bar stocked with hard liquors and wine, beer is definitely the star of the show. If it’s got hops and a bit of alcohol in it, Libertine has it in stock. If not, bar manager Tyler Clark is looking for a way to get it into his rotation. He’s been in the beer business since he turned 18, and he approaches his profession with the same respect and expertise one might expect from a really good orthopedic surgeon.

“I have the best selection of beers in town, by far,” Clark said. “And I rotate the kegs constantly, because I don’t want to drink the same thing every night. I want to try something new.”

The bar certainly offers a new opportunity for night life in Morro Bay: a prime location on the Harbor that can appeal to tourists and locals alike. It looks like the kind of bar a sailor would belly up to after a long voyage, and it celebrates the craft of brewing without being pretentious.

Clark brews his own beer in house, and the first keg was tapped on his daughter’s first birthday. He named it after her, and recently added it to the draft rotation. Aubree’s Wit is a Belgian style wheat beer with a smooth, sweet taste, almost like blueberries, but there are no added flavors. It all comes from letting the beer ferment at a slightly higher temperature than normal. It turns out Clark is a mad chemist, the Heisenberg of beers.

The spot opened just three months ago, and it’s already a hit with locals. Every week, Clark puts old surf movies on the big screen and lets patrons bring their own vinyl records to play on the sound system for Throwback Thursdays. Anyone who brings wax gets a dollar off their beer.

“I didn’t think it would be as big of a deal as it is, but people are freaking out over it,” Clark said.

Libertine adjoins an established Morro Bay eatery, the Embarcadero Grill, and both are run by the same people, allowing beer swillers to order tasty vittles like salmon tacos, pulled pork sandwiches, and bratwursts without leaving the barstool.

Musicians perform every weekend on a small stage near the back corner, and a larger space upstairs allows for the occasional big party concert. On Wednesdays, large cans of the good stuff (Guinness, for example) are available for $2 off, and on Fridays, Clark takes $2 off the price for flights, letting patrons taste any four beers for just $7.

If you’re considering a visit, schedule it for the Firestone Tap Takeover on Sept. 9. Eleven of the local brewery’s beers will be available on tap, including some delicious reserves.

Kick your friends square in the teeth and tell them to donate money of all sizes to the Connect SLO County Fundraiser, an effort to complete bike friendly projects like the Bob Jones, De Anza, and North Coast paths. You’ll be entered into a prize drawing for every donating friend you refer to connectslocounty.org by Sept. 7. Call 547-2055 for more information.

Local surf legend Al Merrick has brought a lot to this community. Now it’s time to give something back. His young granddaughter is fighting cancer and needs help with medical bills. You can support the cause by surfing the pier at Pismo Beach during Paddle for Daisy on Sept. 1 at 9 a.m. and encouraging friends to text “Daisy” to 56512 to donate $10. Call 242-3424 for more information.