After six months of searching, interviewing, and vetting applicants, Morro Bay has selected a permanent police chief. City Manager Andrea Lueker announced Oct. 22 that Amy Christey, a lieutenant with the Santa Cruz Sheriff’s Department, will take the helm from interim chief Mike Lewis, who has led the Morro Bay department since Tim Olivas left in April to serve as second in command in the San Luis Obispo County Sheriff’s Department. 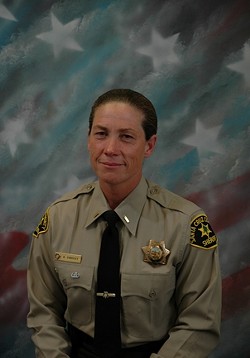 “I am extremely impressed with Amy’s credentials and believe that we have chosen the very best candidate for our new chief of police,” Lueker said in a press release.

With more than 20 years of experience, Christey most recently served as the lone supervisor of the Aptos Law Enforcement Service Center, which served 24,000 residents, twice the population of Morro Bay. Christey holds a bachelor’s degree in criminal justice management and is currently pursuing a doctorate, according to the press release.

Noel Smith, editor of the Aptos Times, described Christey over the phone as dedicated, responsible, and community-oriented. He said her position in Aptos was similar to public relations in that she organized outreach efforts to local schools and other at-risk segments of the community.

While Christey will be spending her last weeks with the sheriff’s department on vacation, she said over the phone that most of that time would be spent planning her move and pouring over Morro Bay’s department policies and procedures. She’ll start work Nov. 5, canvassing the community and introducing herself to the department’s staff of 25. Her officially swearing-in is scheduled for the Nov. 13 city council meeting.