How betting on the Duke energy plant hasn't paid off

The city of Morro Bay has money problems. Serious money problems. Residents are nervous and city officials have been busy trying to explain the budget - everything's under control, this was the plan, etc. But residents attending the Morro Bay City Council meetings don't necessarily believe the Council. They want action now, but they don't want to give up their services.

This time last year the Morro Bay City Council approved a budget that would rely on reserves to supplement dwindling revenues, a result of lackluster tourism years and a failure to agree with Duke over the planned modernization of the power plant.

The city would tap the reserves to keep its employee workforce intact for at least a year until, it was hoped, a deal could be worked out with Duke, said Jim Koser, Morro Bay city finance director.

#But now, talks with Duke have failed and tourism dollars have failed to pick up. Morro Bayâ€™s gamble isn't paying off.

It's the great budget conundrum, said Koser - how to have everything you want from a government and not pay for it. The situation was made worse by the state fiscal crisis, which has resulted in increased state take-aways.

Recently, a group of three local retired businessmen - Jim Bianchi, Dan Glesman, and Homer Alexander - took up the task of reviewing the cityâ€™s budget. Theyâ€™ve got answers, they say: Cut the workforce to maintain the bottom line. And they may be right.

So New Times researched the recent history of Morro Bay to find out why this scenic city, with so much to offer tourists and residents, is losing $200,000 a month. We found that tourism in Morro Bay is actually quite weak, and that the city was counting on money from Duke so it kept a larger workforce than it could maintain.

Unlike Morro Bay, the comparably sized cities of Pismo Beach and Grover Beach have had a steady stream of tourism. Pismo Beach has actually had an increase in bed-tax revenue, a tax attached to hotel room rentals.

Like Morro Bay, Pismo Beach and Grover Beach both employ about the same amount of people, with department heads in each city making roughly $100,000 a year.

The big difference between Morro Bay and its two coastal neighbors is the Duke power plant, so not surprisingly Duke has been a strong influence on Morro Bay and the decisions of its leaders.

For the last four years Duke and Morro Bay have been in negotiation over Dukeâ€™s plan to modernize the existing power plant, which would make the plant more profitable. There are two sticking points: One is an agreement over the outfall lease, the ocean area Duke needs to lease from the city in order to discharge water that is used to cool the plant; the other is the Community Development Fund, a $750,000 check Morro Bay wants Duke to write before they will grant the corporation a lease.

After 1996, when then California Governor Pete Wilson signed legislation opening up Californiaâ€™s electricity market, utility companies like PG&E began to sell their power plants. As a direct result, in 1998 Duke Energy purchased three of those power plants: one in Morro Bay, one in Oakland, and a third at Moss Landing, which has since been modernized.

Although the energy crisis has had widespread impacts on California, Morro Bay was able to receive a hefty revenue stream from its plant, which was called on to supply the state with power. Through a gas-franchise tax that is paid to the city by PG&E and collected from Duke, the city received $2.5 million in 2001 and $3.5 million in 2002. The more the plant ran, the more money the city took in.

Koser said Morro Bay wasnâ€™t counting on this windfall, but it nonetheless helped the city to purchase various pieces of real estate. One such deal was the 714 Embarcadero site and its adjacent property. The city paid $2.3 million for the property, which is now used as a free parking lot. The city also purchased two other pieces of land near the high school for use as a community center; one of those is being sold and is currently in escrow. Some see this as a move to pad the growing budget deficit.

During the energy crisis and directly after, times were good for Morro Bay. The city had money and a substantial workforce and was also looking at the prospect of receiving more money from Duke, if the company was able to work out a deal to modernize the aging facility.

A month before negations between the city and Duke broke off, the city was hoping to receive what it thought would be another windfall from the proposed plant modernization â€” a one-time payment to the city of $750,000, $250,000 a year in rent for the outfall lease, $1.4 million for traffic funding, an annual payroll to local Duke employees of $8.6 million, and steady income from the gas-franchise tax. And, as part of the modernization, the 450-foot-tall stacks would be whacked down to 145 feet. The deal looked promising.

Despite opposition to the plans by the Coastal Alliance on Plant Expansion (CAPE), a local environmental group, and the California Coastal Commission, which argued â€œonce-throughâ€? cooling destroys young fish and crabs, the city seemed ready to go. 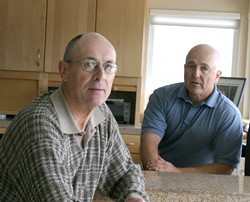 #Then the unexpected happened. Randy Hickok of Duke Energy showed up to a Morro Bay City Council meeting on Sept. 13, 2004, nearly four years after negotiations between Duke and Morro Bay had begun. He told the Council that Duke would not be entering into a lease agreement, saying the company needed a long-term energy buyer lined up before it could go ahead with the plant modernization. That was a turning point. The same energy deregulation that brought a windfall of money to the city in years prior had now created an unstable market with unfavorable circumstances for Duke to modernize the facility.

The city, which had been gung-ho for Duke, now had to deal with breaking even without any money from the energy company. This year Koser is expecting a mere $70,000 from the gas-franchise tax. If the city gets more, he said, that would be nice.

Bianchi, Glesmann, and Alexander decided earlier this year that they had heard enough complaints about the budget during City Council meetings and in the local press, and took it upon themselves to review the budget, â€œjust to try and understand it all,â€? Bianchi said. What was initially a fact-finding effort has turned into kind of a mission to get Morro Bay city department heads to seriously evaluate their respective employees, and make needed cuts that will help keep the city afloat.

Recently Bianchi and Glesmann met and said they feared the worst. What would happen if Morro Bay failed to maintain its budget? Would the city be forced to come under county control, to become a community service district (CSD) like Los Osos or Cambria? Together the two hypothesized that if that were the case, Morro Bay residents would no longer have a say about zoning issues, blindly leaving those up to the county, which would not be as receptive to the residents of Morro Bay.

After months reviewing the budget, Bianchi, Glesmann, and Alexander found that the city was operating at a deficit of about $200,000 a month. They broke it down by comparing it to a personal checking and savings account. The city is pulling $200,000 from its â€œsavingsâ€? account each month to make up for overspending from its â€œcheckingâ€? account, they said.

â€œIf the city keeps going at its current rate, about a year from now the city will be out of money,â€? said Bianchi, a retired lawyer with a background in accounting.

City Finance Director Jim Koser confirmed the timetable. Morro Bay will run out of money Feb. 1 of next year if it continues spending the way it does, he said. The problem: Morro Bay was banking on the eventual deal with Duke. Although Koser doesnâ€™t disagree with the findings of Bianchi, Glesmann, and Alexander, he does have some reservations.

â€œI donâ€™t agree with the way they characterize [the deficit] as â€˜losses.â€™ It implies that we arenâ€™t in control. We are precisely in control,â€? said Koser. â€œBut they are absolutely right [about when the city will be out of money].â€?

At a City Council meeting on Feb. 28, Koser described the situation like this: â€œAbout this time last year when we were seeking City Council direction in the priority-setting process, the City Council made it very clear that one of their priorities was to maintain the level of the workforce. The thinking at the time was that Dukeâ€™s lease was going to expire in November of 2004, and Duke would have to come to the table at that time; they wouldnâ€™t want to take a chance on letting that lease lapse. No one expected they would allow that to happen.â€? 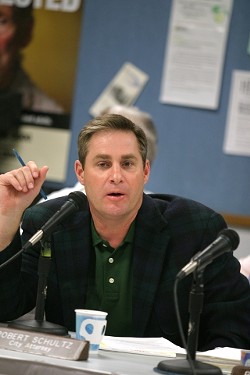 #But Duke did and still does not have a lease with the city. But it does have a contract with PG&E to provide the company with energy on an â€œon-demandâ€? basis. Under the deal, which was recently publicly protested by CAPE and the city, the Morro Bay plant will remain open for PG&Eâ€™s exclusive use. Itâ€™s unclear what the legality of Duke operating without an outfall lease is.

According to Bianchi and Glesmann, Morro Bayâ€™s budget is about $10 million a year, $7 million of which goes to employee salaries and benefits. Even if the city cut all areas of the budget without cutting jobs, they say, thereâ€™s no possible way to make up for the $200,000 monthly deficit.

They also say Duke canâ€™t be counted on for any income.

â€œWe are not the proper people to say what needs to be done,â€? Bianchi said. Thatâ€™s the job of the various department heads in Morro Bay, he added. They know their workforce; they know who or what can be cut.

The latest offer by Duke includes $250,000 a year for the lease agreement and five parcels of land, three of which are inconsequential, said Morro Bay City Attorney Rob Schultz. But even an additional $250,000 a year from Duke doesnâ€™t solve a monthly $200,000 deficit for the city. So even if Morro Bay works out a deal with Duke, it still has money problems. Serious money problems.