Morro Bay's community radio station, The Rock, carries on through the coronavirus

You can donate to Morro Bay's nonprofit community radio station, The Rock, on its website, centralcoastradio.org. They're giving away a Fender P-Bass signed by Sting in December. Anyone can register to win as many times as they want.

Last month was supposed to be 97.3 and 107.9FM The Rock's big annual fundraiser. The live music event and silent auction is when the all-volunteer community radio station asks for donations to cover its shoestring $30,000 annual operating budget. This year's fundraiser got the kibosh for obvious COVID-19 related reasons, and The Rock hopes to reschedule the event for this fall. But as of now, there's no predicting what will happen.

The station—a 501(c)(3) nonprofit organization—transmits to Morro Bay as well as North County, offering eclectic music programing, talk shows, and updates about community events and news. It's hoping the community will help keep it afloat by donating through centralcoastradio.org. 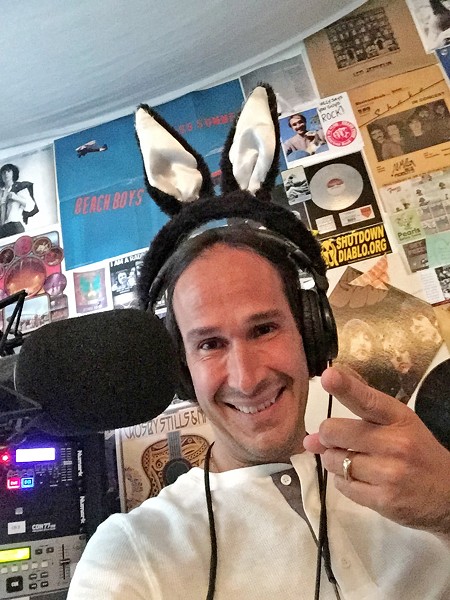 The Rock is a real throwback. Founder Hal Abrams, who New Times spoke to by phone, started the station in 2011 out of his house.

"It was an internet-only station for the first few years as I waited for an FCC license, which we got in 2014," Abrams explained.

The Morro Bay Chamber of Commerce made some office space available in their building at reduced rent in exchange for the station "promoting their agenda" and airing City Council meetings, Abrams explained.

Abrams worked in commercial radio for 35 years and wanted the station to be "the antithesis of commercial radio—no commercials or playlists, no music director, and I wanted to lower the bar on who got to do a radio show."

The Rock has a wealth of on-air talent, some like former KOTR DJ Harry Farmer with decades of experience, and others who came to the station with zero experience.

"We have some very experienced jocks and also blue-haired ladies who were intimidated by the control board," Abrams said. "They run the gamut, so we're very diverse and unpredictable—the anti-commercial radio."

The DJs pick their own music, and it can range from jazz to rock to triple-A to downright weird.

"I have very few rules," Abrams said. "My rule is to follow the FCC's rules. I do try to group similar shows, like I might put two jazz shows together, and I have most of the talk programs on Saturday. It's pretty darn diverse."

The station's license is an "LPFM," meaning low power FM, and its Morro Bay station at 97.3FM basically covers the city and a few miles down Highway 41. In fact, the FCC considers its antenna below sea level, Abrams said. The North County signal at 107.9FM is considerably stronger and runs from Paso Robles to Shandon to San Miguel, but the station has listeners from around the world. If you have an internet connection, you can stream The Rock's programming from its website.

Abrams said the station's online listenership is at an all-time high, but listeners from around the world are less likely to donate to the station.

The pandemic has not only affected the station's fundraising but also how it operates. Many of its DJs are older retirees who are at higher risk for the coronavirus, so Abrams has instituted a number of safety protocols, such as sanitizing the equipment and changing the microphone sock between shifts. Some DJs have decided to forego their time slots until the danger passes.

The station also strives to offer news updates that the community needs.

"We try to ride a thin line," Abrams said. "Some use the station as a distraction, but we still offer twice hourly COVID-19 updates. We just don't want to make it all-COVID all the time."

Abrams notes that even without the annual fundraising event, some community members have donated anyway, but he says fundraising is "a little more anemic than usual. Lots of people don't know where their next dollar is coming from. We've put enough money away to get through the year, so we'll be OK.

"There's certainly no lack of passion among the volunteers. Everyone is trying to keep the station alive," he continued. "But the big financial nut comes from the fundraiser, and to run a station like this on $30,000 is pretty cheap."

Much of the costs of the station come from music licensing. The Rock pays SoundExchange, ASCAP, BMI, and others for the rights to play songs, and with the diverse range of DJs picking from a vast assortment of material—much of it from their own collection—those fees add up.

"We recently paid our first quarter dues to SoundExchange, and we'd played 29,500 different songs," Abrams marveled. "Everybody's a volunteer except for our FCC attorney. Then we have rent, which is greatly reduced, and insurance costs."

The station rides such a thin margin that if a transmitter fails or some other major piece of equipment needed to be replaced, it could be out of business without a major donation.

"Our door's always open to volunteers," Abrams said, "but there's a waiting list to get a radio show. What we need right now are dollars. We don't want to constantly be on-air begging for money, but COVID-19 changed things in ways we couldn't have imagined. I'm hoping those we've helped get through isolation without feeling so isolated will see value in the station.

"We're trying to bring locals together at a time when they physically can't be together." Δ

Senior Staff Writer Glen Starkey is all about bringing locals together. Send story ideas to gstarkey@newtimesslo.com.