If you stop by Flavor Factory before 10 a.m., you can probably glance through the front window and see chef/owner Adam Pollard elbow deep in a white plastic bucket of bright red meat. When I come knocking, the sleeves of his clean chef’s coat are rolled way up, showing off a mix of tattoos and beef.

Pollard looks out onto the parking lot and the sunny morning beyond while hand-grinding his special blend of top sirloin, chuck, and brisket. The finished patties are thick with possibility and full of promise. If a surfer obsesses over the perfect set, Pollard watches for the perfect melding of meat, fat, and seasoning. 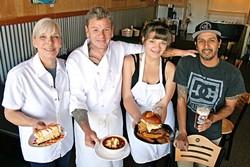 “I can’t tell you the percentage of what I’m using, but I can tell you we grind ’em every day,” Pollard says as he guides the meat through the humming machine, toward its delicious destiny.

Meanwhile, his business partner and wife, Dawnelle—also chef/owner at the eatery—prepares decadent desserts, handcrafts veggie patties, checks on the turkey sandwich meat smoking in the back, and refreshes the salad bar, which brims with from-scratch dressings, house-pickled veggies, and real macaroni salad. There’s always something to taste, chop, or prep around here, and it’s a good thing they’ve got family around to help out.

The couple’s daughter, Riley, mans the flat-top grill. At any moment, lunch will officially begin, and she and her sister, Camille, will be flipping burgers and slapping on more than a dozen toppings, including earthy mushrooms, salty cambozola cheese, beer-braised beef chili, butter-soft pork belly, and fragrant crispy strips of bacon.

Who’ll drop in this afternoon? Friends? Neighbors? Fishermen? At Flavor Factory, it’s usually a combo of all three. The burger joint’s only been open since January, some five months ago, but the Pollards already know most of their customers by first and last name.

Owning and operating enormously popular Morro Bay hot spot Taco Temple for more than 20 years will do that. But Flavor Factory isn’t riding on its famous sister’s coat tails. Flavor Factory is completely its own thing. And that thing is good with a capital “G-O-O-D.”

Think massive, juicy, never-dry beef patties that you don’t just eat, you contend with. Imagine melty cheese tucked under a fresh baked Edna’s Bakery bun (so gooey it’s a lot like handling a perfect slice of pizza). Think fresh, house-made toppings that crunch and comfort and a tangy special sauce that coats every bite with umami magic. Pair all that with a cold pint of craft beer and a handful of hefty potato wedges sprinkled with flaky salt.

All hail the true burger king.

Safe to say this new venture is also on its way to becoming a cult favorite among Morro Bay locals. Still, the Pollards aren’t making a big to-do about it. In fact, they’re closed on Wednesdays and Thursdays to avoid burnout.

“We’ve been low key; trying to ease into it,” Dawnelle says of the new restaurant. “We’ve been wanting to make sure everything is perfect, and we’ve learned a lot as we’ve gone. What’s working is that we’re working it.”

What Dawnelle means by this is that she and her husband come in at the crack of dawn to go above and beyond the average burger standards. From meat to sauce to toppings, their fingerprints are all over the end result.

“All each of us have ever done is cook, so we’ve got something like 60 years of experience between us,” she says. Of course, there’s more than just enviable chef skills between the couple. They actually really like working together, which is evident in their output. Dawnelle, a talented pastry chef, met Adam, a fine dining veteran, shortly after moving to Morro Bay in 1989. The two cooks have been thick as thieves ever since. 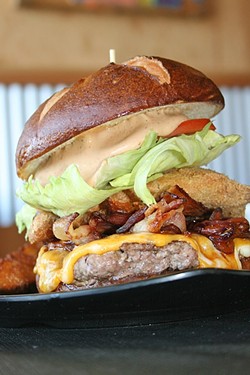 “We met at Happy Jacks bar; I was shooting pool,” Dawnelle says of that fateful night. “That was back when there were sword fishermen, bait fishermen, commercial fishermen in town. It was wild. Morro Bay was truly a fishing village back then.”

At the time of their meeting, Adam was wearing his chef’s coat; Dawnelle was not. Still, a chef has a way of sniffing out another chef. The pair quickly decided to ditch their jobs working for other people to go into business for themselves. That passion has translated beautifully to the plate.

“Our kids grew up in the business. When we first opened Taco Temple in Cayucos, where Ruddell’s Smokehouse is now, my youngest was in a baby carrier on my back while I was prepping and working the register,” Dawnelle says.

The eatery, a fresh California twist on Mexican cuisine, was the couple’s first joint venture. It quickly exploded in popularity and eventually moved to its now famous Morro Bay location on Main Street. Dawnelle says the decision to sell the business back in September was a simple one. Sometimes you just need to move on and try a new flavor.

As Dawnelle tells me matter-of-factly, “Variety is the spice of life.”

The couple had already had their eye on the Flavor Factory location, which, to the unskilled eye, may look like a nondescript strip mall setting. You’d be wrong. The restaurant, previously Nibble Nook, turned out to be a real diamond in the rough. Demo of the lowered ceiling revealed high, wooden beams. More unadorned wood and shiny corrugated metal—a nod to the “factory” aspect—has transformed the vibe into a spacious hangout.

Naturally, the kitchen is also exposed, allowing patrons to see (and smell) sizzling beef patties dancing on the flattop.

“At Taco Temple, people wanted a certain thing, and we couldn’t deviate. It was time to grow,” Dawnelle continues. “I love burgers. We love burgers. There are so many things you can do with a burger. You can put anything on ’em, and it tastes amazing.”

When my burger comes off the grill, I’m already salivating heavily (I asked Adam for “the most badass” one on the menu). With plenty of cheddar cheese; crunchy, spicy breaded and fried Ortega chilis; juicy beef; and copious amounts of bacon, the burger hits multiple pleasure points in my brain. Ding, ding, ding!

I somehow find a way to detach my jaw like a hungry snake and consume half of the sloppy beast. Dawnelle’s dessert, a creamy/salty/sweet/tangy slice of cheesecake drizzled in mango glaze officially rockets the meal to flavor paradise.

I can see now why Adam is a man of few words. His food does the talking, and it shouts. What does it say?

“Eat me, no matter how dedicated you may be to that new juice cleanse.”

“Eat me, because you can’t possibly resist.”

“Eat me, I’m delicious and fatty and full of salt and joy!”

And I did. Well, I ate half—saving the other massive portion for my own better half. In my book, that’s a juicy success story right there.

Hayley Thomas has found the beef. She can be reached at hthomas@newtimesslo.com and you can follow her culinary misadventures on Instagram @flavorslo.