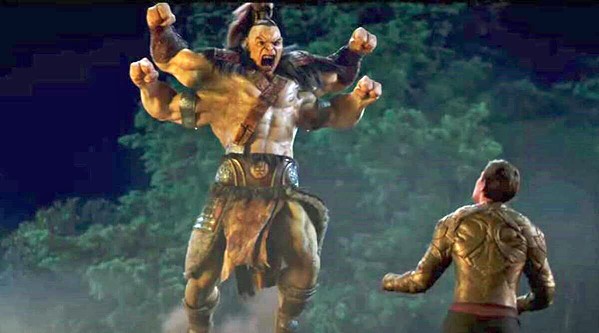 Directed by Simon McQuoid, this most recent installment in the Mortal Combat franchise follows MMA fighter Cole Young (Lewis Tan), whose career seems to be fading fast. It's all but over ... except just maybe he's the only offspring of 117th century ninja clan leader Hanzo Hasashi (Hiroyuki Sanada), who was defeated by evil Bi-Han/Sub-Zero (Joe Taslim), who slew the whole Hasashi bloodline except for a hidden infant daughter found by Lord Raiden (Tadanobu Asano)—lowercase god of thunder—who saves the girl so she could continue the Hasashi bloodline and its prophesy that the blood of Hanzo Hasashi will unite a new generation of Earthrealm champions to defeat Outworld before Outworld wins a 10th Mortal Combat tournament and takes over Earth.

Got all that? Doesn't matter. You're here for the fighting, and there's a lot of it. Unlike previous live-action installments, this one's rated R, so there's a lot of blood and gore too. Is it any good? That depends. Do you want to see a bunch of fighting and listen to some marginally funny banter between Earthrealm fighters? If so, you'll love it.

Otherwise, it's dumb as a bag of hair and silly to boot. Of course, I didn't play the video game and only watched the first 1995 film, so what do I know? Proceed with caution. (110 min.) Δ