"Tomorrow’s issue of the Bay Guardian will be its last,” the new corporate publisher of the San Francisco Bay Guardian told me and the other newsroom staff on the morning of Oct. 14, 2014, abruptly ending the 48-year run of a groundbreaking alternative newsweekly.

It was the latest bad news for the newspaper industry in general, and the alt-weeklies in particular, following the closure of Boston Phoenix and soon to be followed by the shuttering of Metro Pulse in Tennessee. Many surviving newspapers have shrunk to thin shadows of their former selves.

Yet every time I return to SLO to visit family and friends, there’s New Times, still kicking ass with a full staff and standing tall as the exception to this troubling media trend. I’m happy and proud to see New Times doing so well, and I hope its readers fully appreciate it.

As my newspaper career ended that day almost two years ago—a 24-year run at two daily newspapers and four alt-weeklies, all in California, culminating with becoming editor-in-chief of the Guardian—I found myself reflecting on my time at New Times and what the paper and its founder, Steve Moss, instilled in me.

Moss started New Times in 1986, the same year I became a journalism student at Cal Poly, which is where I was when we met. I wrote an opinion piece for him opposing the build-up to the first Gulf War, brought him to campus to speak to other student journalists, wrote a couple of more articles, and we stayed in touch after I graduated and left town to start my journalism career, occasionally writing for New Times from afar. He finally hired me in 1995. 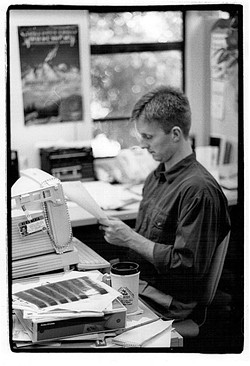 Coming from the daily newspaper world, with its mainstream orthodoxy and confining standard of objectivity, writing for New Times was like suddenly getting my shackles removed and being free to explore the castle grounds and surrounding countryside in all their glory. And Moss—with his boundless curiosity, quirky creativity, and fearless truth-telling—became my guide and mentor.

His nimble mind and deft way with words encouraged me to stretch myself as a writer, playing with different voices and unusual story structures. His unwavering support and sage advice gave me the courage to pursue deep investigations and go after big fish. And his exacting standards and clear vision for what he wanted New Times to be toughened me up and made me expect more from myself.

When I exposed high-profile businessman Carl Hagmaier as a white-collar criminal (see “The Rise and Fall of Carlton J. Hagmaier”), Moss supported me in the face of legal threats and throughout the more than three years it took to finally help send Hagmaier to prison for four years. And in wrapping up what that meant to me and society, he let me stretch my wings to tell the story in an unconventional way (see “Judgement day”).

I carried these lessons and encouragement throughout my career as a writer, and they gave me a model for the kind of editor that I would become. It’s rare to find someone with such talent and vision in a media market the size of SLO, and even rarer to have it endure for decades and inspire excellence long after you’ve slipped the mortal coil.

But New Times has stood the test of time—at a time when so many other newspapers are in decline—and San Luis Obispo is a better place for it. And I’m a better man for having worked there. Happy birthday, New Times.

Steven T. Jones, a New Times staff writer from 1995 to 2000, now works as a media specialist for the Center for Biological Diversity.

The rise and fall of Carlton J. Hagmaier

Carlton J. Hagmaier was a San Luis Obispo success story. Several years before he reached his current age of 33, Hagmaier was a millionaire, well-known around town and his country club for being a big spender.

At both Cafe Roma and Giuseppe’s Italian Restaurant, two among his favorite pricey haunts, Hagmaier would sometimes drop a few thousand dollars a month wooing clients and friends. Hagmaier was also a regular at major wine auctions here and in Napa Valley, shelling out big bucks for the best wines.

After work, he would socialize with SLO’s elite, including prominent developer Rob Rossi, whom Hagmaier considered his “best friend.” With Rossi, Hagmaier got involved in commercial real estate, building his $2.5 million office building at 444 Higuera St. and becoming a partner in the sprawling Promontory office building down the street.

True, he was only an insurance agent, working as this area’s general agent for Guardian Life Insurance Co. But he also sold and administered the company’s lucrative pension plans, and he parlayed his nearly $500,000 annual salary into a personal fortune.

But, perhaps, there is another side to Carl Hagmaier.

Some of Hagmaier’s clients say he financed his expensive tastes and social climb by stealing their money. They accuse him of forging a multitude of documents, depositing clients’ pension funds in his own account, using financial sleight-of-hand to raid the equity from life insurance policies, and stealing money that was intended for his clients.

Among Hagmaier’s accusers is Rossi, who says his former friend betrayed his trust to steal from his family members’ trust funds and skip out on a loan. Rossi brings Hagmaier’s name into the most serious of the financial misdeeds of which he stands accused: taking PIC Manufacturing’s $600,000 employee pension fund.

In addition to financial ruin and a half dozen civil lawsuits, Hagmaier could also face criminal charges. His alleged misdeeds are currently being investigated by both the FBI and California Department of Insurance.

“I didn’t do anything wrong,” he maintains. …

At the center of most of the accusations are alleged forgeries committed by Hagmaier that led to hundreds of thousands of dollars going into his bank account.

In most cases, Hagmaier is accused of having benefited directly from the alleged forgeries. In some cases, the documents show Hagmaier signed off as the witness to the signature, which further indicated he was involved in taking money from his clients.

The two most serious lawsuits against Hagmaier are from PIC Manufacturing, a Paso Robles firm that makes a specialized printing part, and from PIC’s owner, Michael Camp. …

… Early this year, a federal judge ordered Hagmaier to give a deposition about the PIC fund. He did so on April 29 in Los Angeles, against the advice of his attorney, James McKanna, who advised him to exercise his Fifth Amendment right against self-incrimination.

That deposition, with its insights and apparent contradictions, could prove to be the key to Hagmaier’s undoing.

“PIC gave us free rein to decide where to put the moneys—gave me free rein,” Hagmaier said. That statement contradicts written instructions from PIC stating, “Securities and investments are to be limited to life insurance contracts, treasury bills, notes, bonds, certificates of deposit, and money market funds offered through and guaranteed by Guardian Life Insurance Company.”

So what does Hagmaier say he did with the money?

“There are two main investments in the plan. One is a series of loans to an individual, Rob Rossi, another is a loan to—a couple of loans to—Henry Byzinski,” Hagmaier stated.

In answering questions, Hagmaier went on to say that both the $250,000 “loan” to Rossi and the $175,000 “loan” to Byzinski were undocumented and included no promissory notes.

The terms were supposedly 8 percent interest and a 90-day call and he said nothing had been repaid.

Byzinski could not be reached for comment, but Rossi said Hagmaier is lying.

“I totally deny that he, or he through the PIC pension funds, loaned me any money. It is an untruth and it is ridiculous,” Rossi said, adding that the statement “is just outright slanderous.” …

Three years later, Jones wrote his final piece on the matter, after Hagmaier’s federal sentencing hearing in Los Angeles. It was printed on May 6, 1999.

But tomorrow my wait will be over. Tomorrow Hagmaier will be sentenced, finally brought to justice for what he has done, what was so obvious he had done when I first looked at the evidence against him nearly three years ago. …

… I read all the many lawsuits against him. I studied his forged documents. I read his early incriminating deposition, and those of many of his victims, and spoke with many more victims, many of whom were once Carl’s friends.

The victims. Victims of Carl Hagmaier. Victims who tell tales of Hagmaier’s particular blend of charm and pathology. He was slick, credible-seeming, and convincing. They had been lied to, again and again, having no reason not to believe. Hagmaier was believable. It was his stock in trade, the thing that gave him his career and his taste of the good life, a taste that would fuel his crimes.

I’ve often wondered what was going through Hagmaier’s head at the time, about how he was able to justify his behavior to himself. More than that, how he could have possibly thought he would never get caught. …

… It’s the first time in years some of us have seen Hagmaier, and here he is, looking tan and trim in his death-black suit and short haircut, walking with his lawyer, Eugene Moscovitch, and wife, LeeAnne, toward his day in court.

As he passes the group, his eyes stare straight agead, ignoring the prying eyes of his accusers.

“Carl, are you sorry for what you’ve done?” I ask.

Hagmaier ignores the question, which doesn’t even cause him to break stride.

“No comment,” LeeAnne whispers in my ear as she passes, smiling sweetly, touching my arm in a surprisingly friendly way, although perhaps with a touch of condescension. Whatever it is, it will later turn to anger.

“I have instructed my client not to comment,” Moscovitch then tells me. Hagmaier is apparently saving himself for his big performance, the statement to the judge, that, if well-executed, might knock months or even years off his sentence. For this slick salesman, who talked his way out of trouble so many times before, this will be the biggest test of his abilities.

The trial starts about a half-hour late. Only a few times do glimmers of the defendant’s old arrogance cross his face, a disgust that he is having to go through this, always quickly concealed.

I’m a journalist and we aren’t supposed to have emotions. But I have to admit, here in print, after watching Carl defy his victims and justice for so long, after he labeled me a liar for the things I wrote, I do feel slightly vengeful toward Hagmaier. I want him punished. …