'Mother!' is a challenging psychological thriller

Darren Aronofsky (Pi, Requiem for a Dream, The Fountain, The Wrestler, Noah) directs this psychological thriller about a couple, played by Jennifer Lawrence and Javier Bardem, whose quiet country life is upended by unwanted guests. (121 min.) 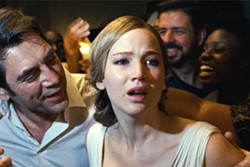 Glen: Don't come to Mother! looking for a standard-issue horror mystery. Aronofsky's new film doesn't care about your expectations. Instead, it's there to get your wheels turning as you try to figure out what it all means and how all the pieces fit together. First of all, the film takes place in a single location: a rambling two-story country house surrounded by fields and trees. There's literally nothing else around. The characters are nameless—no names are ever uttered, and in the credits Lawrence's character is "Mother" and Bardem's is "Him." The first uninvited guest to arrive is "Man" (Ed Harris), followed by Man's wife "Woman" (Michelle Pfeiffer). Later, their acrimonious sons, "Younger Brother" (Brian Gleeson) and "Oldest Son" (Domhnall Gleeson), show up. We learn that Bardem's character is a published poet who's unfortunately blocked. The secluded setting is supposed to give him the space to create again. When the "guests" begin to arrive, he thrives off them, inviting them in, while Lawrence's character doesn't understand why he wants these strangers in their house, which she has been lovingly restoring room by room. From there, increasingly strange things happen—the house seems to have a life of its own, more uninvited "guests" arrive and further disturb and abuse the household. It's an uncomfortable film, drenched in tension and dread, and as soon as I left the theater I turned to my wife and said, "I have a couple of theories." The film is like a puzzle to solve, an unpleasant puzzle.

Anna: Mother is understandably put off by her husband's full embrace of strangers in their home—it seems that if she could choose to live the rest of her life only seeing her husband, she would be perfectly happy. She plays the part of his muse with great care, tending to him and his sanctuary, never a toe over the line even when she is being trampled by what he lets into their world. The mysterious man who shows up at their door is nothing but a distraction in the world she's building room by room, while for her husband he's a welcome inspiration—something she's failed to be. When Pfeiffer's character shows up, she shoves her way into Mother's personal life, asking questions about children, chiding her plain underwear, leaving a wake of mess and destruction in every room she enters. Pfeiffer's performance is downright bone chilling, and her vindictive spite for Mother seeps out of her eyes with every glance. Bardem's "Him" is blind to it, insisting that these people are responsible for his sudden writing inspiration and that his wife is simply being unkind by wanting them to go. While things get even weirder when their two sons show up, it's nothing compared to what happens after the first guests are gone and there are months of peaceful rest as Lawrence's character prepares for the birth of their baby. After that, it's a step into the bizarre and disturbing, to say the least.

Glen: I'm still not sure what it all means, but one of my theories is the house is a metaphor for the mind, and that Bardem's character is the ego, Lawrence's is the moralizing super-ego, and all the various guests are the id, and their need for sex, sustenance, and bodily function. Of course, the story may simply be a metaphor for creativity, and how creation is also an act of destruction. Each new creative endeavor requires struggle. To complicate it all, there are some biblical elements—a Cain and Abel story, a messiah story. Aronofsky is good at making puzzlers, and I'm not sure viewers are supposed to understand every element. It's a film that takes risks and is sure to divide audiences. Many will hate it because it doesn't offer the escapist fare some go to the theater for. It's not exactly entertaining in a "sit back and enjoy the ride" kind of way. Instead it will have you scratching your head, wondering what Aronofsky's up to. A lot of his films are like that. His first feature, Pi, was about a paranoid mathematician searching for a number that explains nature's universal patterns. Requiem for a Dream followed four drug addicts whose chemically induced utopias disintegrate as their addictions deepened. The Fountain was a sci-fi love story through time. His most accessible film was The Wrestler, about an aging professional trying to create a life outside of the ring. Black Swan was about the insanity-inducing pressure of professional ballet. Noah, Aronofsky's last feature, was a deeply alternative take on the biblical flood story. If you're going to an Aronofsky film and expect Hollywood business as usual, you'll be disappointed. This film is weird.

Anna: I definitely see the film as a metaphor for the creative mind—the house acting as the body or vessel for that, Bardem's character the creator, and Lawrence's the poor muse who will never be as loved as her husband's work. Mother can touch the walls and feel the life of the house, which seems to wither and harden whenever someone else comes inside. She loves her husband wholly, and wants nothing else but their isolated life with no one else. Bardem's "Him" wants praise beyond hers, his bottomless need to create overshadowing everything else. All she wants is for her love to be enough for Him, all he wants is the adoration of others. The film takes very dark and twisted turns, and I certainly can't say I found it enjoyable. It reaches far beyond what most people want in a film, though I did find it compelling and well acted. Mostly tight shots through twists and turns of the home, Mother! is another of Aronofsky's disturbing and mind-bending creations, perhaps a reflection on how he sees his own mind at work. The films I've seen of his are neither easy nor pleasant, and Mother! joins that list no question. If you dig his style and don't mind coming out of the theater more disturbed than when you went in, it may be for you. Otherwise I think this film will miss the mark for a lot of people, and they may find it downright unpleasant. Δ