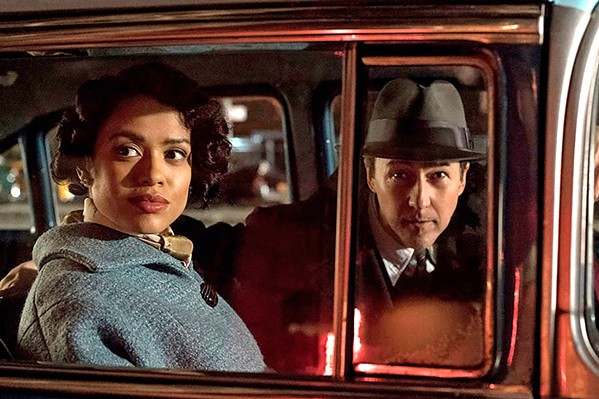 Glen If you're in the mood for a "good old-fashioned" neo-noir in the style of Chinatown, this is the film for you. The film opens with Lionel and his colleague, Gilbert Coney (Ethan Suplee), staking out an operation their boss, Frank Minna, has kept them in the dark about. They don't know what Frank's into, but they know that depending on his signal, they need to cover him or follow him in their car. It's a taunt opening set-up and one that goes quickly wrong as Frank is murdered right before their eyes. Who did it and why is what the rest of the film is all about. We're in the dark as much as Lionel is, and we're along for the ride as he slowly pieces together the mystery, which seems to center on Laura Rose (Gugu Mbatha-Raw), an assistant to low-income housing advocate Gabby Horowitz (Cherry Jones), who's fighting the powers that be in New York City, who have been evicting black and brown residents and gentrifying their neighborhoods, leaving the former residents with nowhere to go but out. Who's really pulling the strings behind the city redevelopment? It's certainly not the newly elected puppet mayor (Peter Gray Lewis). Instead, it's Frank Moses (Alec Baldwin), an appointed commissioner who really wields the power. So why did Moses come down on Minna? He's afraid of a file Minna had on him, but what is it about? Maybe it's about Moses' brother, Paul, a brilliant electrical engineer who's trying to upgrade the electrical grid, or maybe it's about nightclub owner Billy Rose (Robert Wisdom), who's somehow related to Laura Rose, who lives above his club. Obviously, this is a story with a lot of moving parts, but Norton, directing himself, does a fantastic job of keeping it mysterious but not muddled.

Anna I found Motherless Brooklyn to be a gripping mystery and a well-crafted character study for Norton. Lionel, with his bursts of foul language and unyielding loyalty to his friend Frank, is totally endearing and the quest he's on is a genuine series of twists and turns. Lionel was raised in a Catholic school for boys (aka an orphanage) along with his lifelong friends Tony (Bobby Cannavale), Danny (Dallas Roberts), and Gil. All four boys were taken under Frank's wing and they all operate under him in a car service/private eye operation. Lionel's top-notch memory is a huge asset to the business and his unstoppable devotion to Frank means he'll never leave his mentor's side—even after Frank's death. It happens early on in the film, so most of the time we spend is alongside Lionel as he works the investigation and seeds a blooming relationship with Laura. There's no denying that Norton is a phenomenal actor and with Motherless Brooklyn he proves his direction is also compelling. This movie just looks and sounds cool.

Glen The attention to detail really transports viewers to 1950s-era New York, with the cars, storefronts, and clothes of the era. The performances are all top-notch as well. Norton has proved adept at playing characters with peculiar ticks, from his stuttering southerner Aaron Sampler/"Roy" in Primal Fear (1996) to his turn as fake cerebral palsy sufferer, Jack Teller, in The Score (2001). He's terrific as Lionel, who's ever apologetic about his outbursts in an era that hadn't yet found a name for Tourette Syndrome. Baldwin is all thick-necked menace as Moses, who's disinterested in money and notoriety. He seeks raw power, the kind of power that will let you get away with anything. Mbatha-Raw also delivers as the sympathetic Laura, the woman at the center of the mystery. When Laura takes Lionel to Billy's jazz nightclub, mostly filled with black patrons, the music sets Lionel's affliction off, and soon he catches the eye of the band's trumpet player (Michael Kenneth Williams, who's fantastic here), who recognizes something special in Lionel's ability to feel the music. There's just a lot of talent up on the screen, and the mystery resolves in a very satisfying way ... if you can keep up with it all. If you're a mystery fan, like an engrossing character study, or enjoy film noir, Motherless Brooklyn ticks all the boxes.

Anna Baldwin is impressively unlikeable as the powerful yet still power hungry commissioner; his seething all-or-nothing mentality doesn't hide far below the surface. The connections between himself and Paul, Billie, and Laura are a winding mess that kept me guessing well into the almost two and a half hours the film spans. Arguably Motherless Brooklyn runs a little long—it could have been tightened up—but overall I didn't mind the length. I was kept guessing and that meant I stayed engaged from beginning to end. The film is an adaptation of a novel by the same name by Jonathan Lethem, and while I haven't read the book yet, this film made me want to. It's a rich world—between some awesome costuming and recreating the New York of the 1950s, Motherless Brooklyn creates a world we are easily transported to. I hope Norton gets the directing bug again soon. I'd hate to wait another 19 years to see his directorial work on the big screen! Δ