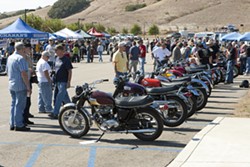 It’s Saturday, Oct. 13, and the sun is shining and a light breeze is blowing across the hilltop parking lot of Mountainbrook Community Church, carrying with it the smell of barbecuing ribs from the Ribline and occasionally the smell of gas and burning oil from ancient motorcycles, some nearly 100 years old and still running.

It’s the annual SLO Classic Motorcycle Show, a gathering of bikers and bike lovers who appreciate the classics, where collectors display their perfectly restored bikes made by Triumph, BSA, Vincent, Matchless, Norton, and other British manufacturers. But there are also Harleys, Indians, Moto Guzzis, BMWs, Bultacos, Ducatis, and more—bicycles, mini bikes, sidecars, fairings, motorcycles parts, everything a bike nut could want. 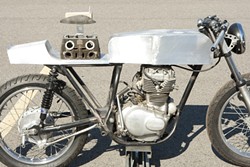 Grand marshal and show bike judge Craig Vetter slowly makes his way through the long line of bikes, meticulously looking at every aspect of every one to determine the best. A little later, guys on vintage bikes will compete in the motorcycle games, the agility course, the slow drag race, loudest bike, and more.

Guys in leathers blend in with attendees in shorts and flip-flops, people gather around gleaming bikes to ooh and ahh, parts buyers and vendors haggle over prices. If you like motorcycles, this is the place to be. Motorcycle heaven!