On Sunday, Dec. 8, Mountainbrook Church's nearly full auditorium was buzzing. The church had called a congregational meeting to address Lead Pastor Thom O'Leary's leave of absence and the "credible allegations" against him of inappropriate behavior. 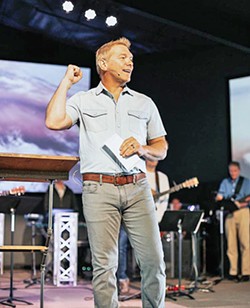 Tina Swithin, a 10-year Mountainbrook member and author, nervously sat in her seat next to her husband. Swithin wrote a Facebook post on Nov. 29 calling on the church for transparency during and after the investigation of O'Leary's conduct, which garnered a mix of support and disgruntled comments.

Although she's been going through a range of emotions since she first learned about the allegations against the lead pastor, Swithin said she needed to be present.

As Equipping Pastor Greg Jeffrey—who reports directly to the lead pastor and is also O'Leary's son-in-law—took the stage on Dec. 8, the congregation immediately fell silent.

"Gosh, my heart is just going through the roof right now," he said to the room, exhaling heavily.

He and each member of the all-male Mountainbrook Church board spoke to the audience, sharing the number of years they've attended the church, the fact that their children were baptized at the church, and their relationships with O'Leary.

They asked for the congregation's continued patience and prayer during the investigation but did not have new information to share beyond the emails sent out to church members in the previous weeks. As a result, board member John Waddell said the board wouldn't be conducting a question-and-answer segment for the community.

Several female attendees got out of their seats and left the auditorium after the comment.

"When employees brought their concerns directly to the board, the board recognized its responsibility to respond in an impartial way," Waddell told the audience. "But the investigation is ongoing, and the situation is still developing. It would not be fair or prudent to make public statements about information that may or may not turn out to be accurate, or significant."

At the close of the announcement, the board introduced the interim pastors, Rick and Becky Olmstead, who are senior level leaders in Vineyard USA—Mountainbrook's parent church organization.

During their prayers, Becky was the first person during the meeting to mention the alleged victims in the investigation and include them in her prayers.

The announcement closed with a song called the "Goodness of God," during which church member Swithin stood in the audience and wiped away tears as her husband placed his arm around her.

Waddell told New Times via email that the board was working through an investigation into the allegations and could not provide the details of confidential personnel issues.

In a separate email 20 minutes before the congregational meeting, he said it was the board's intent to update the congregation at the church meeting but said that "new allegations have been raised, so the investigation is still underway, and we are not able to discuss any details at this time."

The board didn't disclose that there were "new allegations" during the Sunday meeting.

Swithin told New Times that she wasn't satisfied with the outcome of the meeting.

As she spoke with New Times in her home days before the Dec. 8 congregational meeting, Swithin said that without trying she's become a voice for a friend, who did not want to be public about her involvement in the O'Leary investigation. Her friend is an alleged victim of O'Leary.

On Nov. 24, Swithin received an email from Mountainbrook Church that stated O'Leary and his wife, Sherri, were on a leave of absence until February 2020.

After reading the email, Swithin said, "My gut told me something wasn't right."

Swithin reached out to her friend, who then informed her she was a victim that was allegedly groped by O'Leary.

Swithin and the rest of the congregation weren't formally informed about the allegations against O'Leary and the board's investigation into the matter until the Dec. 1 Sunday service.

According to the board, O'Leary was placed on paid leave on Nov. 4, and the board hired a third-party investigator shortly after. The board hasn't disclosed the specific allegations against O'Leary.

"I think a lot of people are just really hurt and devastated and wanting to know the reality of this whole situation," she said.

Before becoming a member of Mountainbrook, Swithin said she would have probably considered herself agnostic—a person who claims neither faith nor disbelief in God.

January 2009 was the first time she became acquainted with Mountainbrook at its SLO Chamber of Commerce ribbon-cutting ceremony—she was an ambassador of the Chamber at the time.

A week after the ceremony, Swithen had a dream that she said felt like God's nudge, pointing her in the direction of the church.

"I was very nervous about being a single mom and going through a divorce and wondering if I would be accepted, or if they would look down on that," she said.

Swithin decided to become a member of the church and took four classes to do that; O'Leary administered the first class.

"I felt very accepted that day and like this was a place I could be a part of. The third class was really honing in on what your skills are, what your purpose is in this life," she said, "and it was in that class that I discovered that not only would [the church] not look down on me for being divorced but that they would actually also encourage the direction I'd started to go at that point, which was advocating for other victims of domestic violence and abuse."

In addition to her divorce, Swithin was also going through a court battle to gain full custody of her two girls.

"Thom knew that I was struggling with that specifically, which is why this makes it even more difficult for me because it has to do with predators and sexual abuse," she said. "He has been so reassuring to me that the church is a safe place for me. And that's why this has rocked me."

New Times reached out to O'Leary for comment but didn't get a response. Vineyard USA's national coordinator, Elgie "Bubba" Justice, told New Times via email that the local church is leading the investigation and that each investigation has different circumstances that lead to different protocols. Justice said he didn't have any further information to add.

O'Leary has been a lead pastor at Mountainbrook for more than 22 years. He also serves as chaplain for the SLO Police Department, the Cal Poly football team, and is on the SLO police chief's roundtable.

"To put someone on a pedestal who I truly believed was such an honorable, good person, and then to know that's not who he really is has been absolutely devastating," Swithin said.

She said she will wait for the investigation's outcome as well as watch how the board continues to handle the matter.

"You know my relationship with God is still there. I don't know that I can bring myself to go to church again, and that makes me really sad to say, but this is really from a trust level," Swithin said. Δ