During the Sunday service on Feb. 2 at Mountainbrook Church, church officials announced the resignation of former lead pastor Thom O'Leary and his wife, executive pastor Sherri O'Leary. The announcement comes after the church investigated allegations made against the lead pastor of innappropriate behavior. 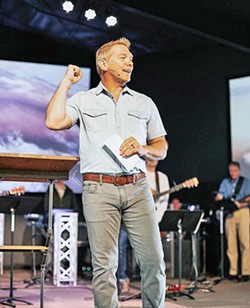 The all-male church board emailed a resignation statement to the church community and local media outlets, including New Times, that same day.

According to the statement, the O'Learys officially resigned from their positions on Jan. 31.

On Nov. 24, 2019, the church board announced the O'Learys had been placed on a paid leave of absence since Nov. 4 but didn't give an explanation or a reason. The paid leave was slated to end in February of this year.

The congregation wasn't formally informed of the reason for the leave of absence until Dec. 1. The board announced to the community that "credible allegations of inappropriate behavior" against Thom O'Leary prompted the board to hire a third-party investigator shortly after the allegations were brought forward.

In the board's recently released statement, it said the investigator "found those concerns" of inappropriate behavior "toward certain women" to be valid. The specifics of the allegations remain unclear.

"During that process concerns surfaced about use of church funds. Those concerns have now been resolved," the letter stated, although it didn't specify what those concerns were.

The letter continued: "Even though they [Thom and Sherri] have found themselves in a place where they need significant time to find healing, this does not negate the many years of good things that they facilitated through their roles at Mountainbrook."

The statement said Vineyard USA had offered to explore ways it might be able to help the couple in their "recovery and healing."

New Times reached out to Vineyard USA for comment but didn't get a response before press time. The O'Learys signed a statement that was included at the end of the church's Feb. 2 letter.

"We want to thank you for being gracious to both of us and our family over the last 27 years of our pastoring the church. We also want to encourage you to continue to gather, grow, and give at Mountainbrook, and to bless and encourage the church staff and leaders, fulfilling 'God-size' vision for the church," the statement read.

In response to questions from New Times regarding what would be done for the victims who spurred the investigation, board member John Waddell responded in an email, "As we said in the initial email with the statement, we are unable to answer further questions at this time. We cannot comment further on these confidential personnel matters."