Eek-A-Mouse rides into town on the Black Cowboy album

If reggae has a Bobby McFerrin, it's Eek-A-Mouse, whose vocal gymnastics created a style of reggae all his own. Coined singjay style, Eek (born Ripton Hilton, sometimes spelled Hylton), sings Asian-sounding abstract utterances as well as recognizable words.

The towering 6-foot-6 performer took his name from a racehorse he continually lost money on. By the time the horse won, he had stopped betting on it. He hasn't recorded a new studio album since 1996's Black Cowboy, but he has plenty of excellent material to fall back on he began recording in the mid-'70s.

"I loved Nat King Cole, Marty Robbins, Cab Calloway, Patsy Cline ... all different singers. Sam Cooke and The Beatles ... and stuff like that," Mouse said in his bio. "And then I came up with my own original style."

And original it is. Check out Eek-A-Mouse on Tuesday, April 3 at 8 p.m. in Downtown Brew. This is a 21-and-older, $20 show. Buy 'em in advance at ticketweb.com or Boo Boo's. Local act Klockwyze opens the show. 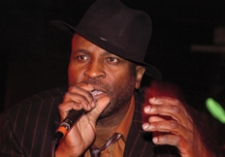 THE MOUSE THAT BOINGED Eek-A-mouse plays Downtown Brew on April 3, bringing his singjay style of vocal gymnastics to the SLO Town club.

Rockin' Rhodes
There's a new blues rock sheriff in town and its name is Rhodes, a quartet fronted by Daniel Whittington, whose full round voice sounds like it could fill a stadium.

"Between the band members there are roots that include everything from classic British guitar rock, Texas blues, and early metal rock, to folk- and bluegrass-influenced singer/songwriters," according to Whittington, who's joined by Phil Siems (bass), Ryan Allshouse (drums), and Darren Clarke (lead guitar).

"We really had a desire early on to re-explore the music that we grew up on it's the music that made us want to become musicians when we were young tikes," Allshouse said. "When we started writing, it started flowing out and it was exciting and right away showed the promise of being the kind of band that could create the kind of music we had always dreamed of making."

The band spent three years putting together its debut album, Half a Mind to Stay, a CD "recorded in the old school fashion, as a band, with no studio trickery. All tracks were laid down in solid and complete takes with no overdubbing. The results are raw and organic with two guitars, bass, drums, vocals, and lots of heart."

Check out Rhodes on Thursday, March 29, at 7 p.m. in Urban Outfitters, for an all-ages album release party. On Saturday, March 31, the band plays an 8 p.m. show at Mr. Rick's with the JD Project. 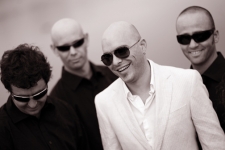 THE RHODES LESS TRAVELED Blues rock act Rhodes will play an album release party on March 29 in Urban Outfitters and a show on March 31 at Mr. Rick's with the JD Project.

Sing out, sisters
I don't know of any instrument as potentially stirring as the human voice. There's just something about a well-trained voice that eclipses strings, horns, drums anything we can play. So imagine the potential of seven well-trained voices singing uplifting socially conscious songs and you'll have an inkling of the power and majesty of Sweet Honey in the Rock, an a cappella vocal ensemble that began in 1973 when founder Bernice Johnson Reagon founded the group at the D.C. Black Repertory Theater.

No wonder the late Harry Belafonte declared, "I have always believed art is the conscience of the human soul and that artists have the responsibility not only to show life as it is but to show life as it should be. Sweet Honey in the Rock has withstood the onslaught. She has been unprovoked by the 30 pieces of silver. Her songs lead us to the well of truth that nourishes the will and courage to stand strong. She is the keeper of the flame."

Tickets range from $32 to $44, with student discounts available. Purchase them at the PAC Ticket Office or by phone at 756-2787. This performance is sponsored by Scott and Barbara Radovich and by KCBX 90.1 FM. 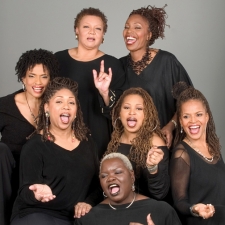 PHOTO COURTESY OF SWEET HONEY IN THE ROCK

Born in a barn
The Red Barn Community Music Series is surely one of the bigger grassroots music success stories, a real community event that begins each concert with a potluck supper and open jam. On Friday, March 30, the South Bay Community Center in Los Osos plays host to two Seattle-based performers: Reggie Garrett and Gary Westcott.

Garrett provides the vocals and rhythm guitar to multi-instrumentalist Westcott's guitar, mandolin, slide steel guitar, and banjo to form a duo working in a variety of musical styles and ideas. They perform their own original songs mixed with a number of more traditional folk ballads and contemporary folk style music, incorporating Latin rhythms, blues, gospel, jazz, Celtic, and much more.

The concert begins at 7 p.m. with the potluck and jam earlier at 6. A $10 donation is requested at the door. Learn more about the series at www.myspace.com/redbarnseries.

Rocket roll
How does one describe The Phenomenauts? Space-age galactic rock? New Wave lost-in-space rock? Surf rocket-roll moon shot? According to the band, their sound is a mix of the Kinks, the Ventures, the Stray Cats, and Devo a blend of punk, pop, and psychobilly all in the service of sci-fi themed anthems to cosmic creativity. 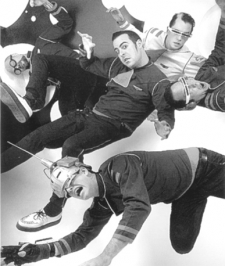 PHOTO COURTESY OF THE PHENOMENAUTS

PHENOMENAL For sheer spectacle, you'd be hard-pressed to find a more crazy band than The Phenomenauts, who bring their punk, pop, surf, and psychobilly to Downtown Brew on March 30.

Come on, get happy!
The SLO Vocal Arts Ensemble will hold its Annual Pops Concerts, "a light-hearted repertoire of eclectic and fun-filled music and dancing," on Saturday, March 31, at 8 p.m., and Sunday, April 1, at 3 p.m. at the Clark Center in Arroyo Grande. The concert marks the group's 30th anniversary. The nonprofit organization was established in 1977 and consists of 50 volunteer adult singers performing under the directorship of Gary Lamprecht.

Once a year, the ensemble departs from their traditional "choral music" to don costumes, learn dance steps, and belt out a bevy of popular tunes, and this year's theme is "The Happiest Hits!" meaning you're in for some upbeat fun. These usually serious performers aren't above having fun with their amateurish dancing and acting. According to concert organizers, "You'll be amazed at the depth of talent and delighted by the tomfoolery, as our artists bring back their most popular musical characters, their goofiest doo-wop, their warmest love songs, and their most inspiring Broadway refrains." 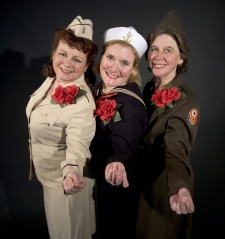 MUSIC AND MIRTH Various members of the SLO Vocal Arts Ensemble will split into groups like the Goody Goody Girls (left) and The Bald Spots to present "The Happiest Hits," the Ensemble's annual pops concert on March 31 at the Clark Center.

Meet bill
I don't know what podcasting is something to do with iPods, maybe? Regardless, it's out there, and a band that made its name via podcasting bill (lower case like e.e. cummings!), which saw 1,200 downloads in the first seven days of the release of its debut album Birthday Suit is coming to Frog and Peach on Thursday, April 5.

In the band's hometown of San Diego, they were nominated by the San Diego Music Awards as "Best Pop Band of 2006" and recently received national attention when Rolling Stone named them one of the "Best 25 Bands on MySpace." Learn more about the band at www.myspace.com/bill.

More music
Last week, I reported that jazz act Reptet was coming to Downtown Brew on Thursday, March 29. I got the information from the band, which was in negotiations with the club but hadn't confirmed the date. Well, looks like they jumped the gun a bit as did I. The concert is a no-go. Mea culpa to any fans and Downtown Brew. Next time I'll confirm on the club's web site: downtownbrew.com.

Jazz act the Mike Raynor Group has a special treat in store for jazz fans on Friday, March 30, when San Diego vocalist Robin Adler joins Raynor's band at the Inn at Morro Bay. Adler has performed with San Diego's jazz guitarist Peter Sprague throughout Southern California, and their collaboration resulted in the 1998 release, It's About Time, a critical success. Adler has also performed with pianist Mike Wofford (music director for Ella Fitzgerald), bassist Bob Magnusson (Sarah Vaughn and Linda Ronstadt), and Barnaby Finch (former music director for George Benson and current keyboardist for Lee Ritenour.) The show begins at 7:30 p.m. and should run to about 10:30. Learn more about Adler at www.robinadler.com. 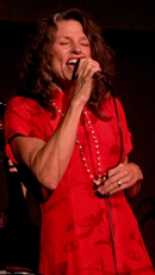 Local girl-fronted indie dream-pop band Elle Moss is releasing its debut album, Rain or Snow, on Friday, March 30, at 7:30 p.m. in the Atascadero Lake Pavilion. The cost is $5 and includes other indie acts, such as Iamb (from Paso Robles), Kapiano (from Los Angeles), Candle (from San Diego), and Crash Plastic (from Lompoc).

On Friday, March 30, at 7:30 p.m., internationally trained and educated Louise King will play selections from her favorite classical composers Mozart, Shubert, and Chopin at St. Benedict's Episcopal Church at the corner of Los Osos and Clark Valley roads in Los Osos. King has played everywhere from Carnegie Hall to the Lincoln Center, as well as at the debut performance of the Clark Center's new Steinway piano. A native Californian, she currently lives in Morro Bay. There will be a free will offering. For information, call 528-0654.

Local husband-and-wife team Melanie and Derek Senn, better known as The Wedding Industrial Complex, plays Sweet Springs Saloon on Saturday, March 31, opening for the Shamblers at 9 p.m. Mel beats the skins while Derek rocks the guitar, singing tongue-in-cheek songs about Melanie's pregnancy and the damper it put on his partying and other tales of domestic bliss and leftwing politics. Said Derek, "This could be the last chance to see us live before we become famous ly bogged down with two young children." Looks like Derek knocked up Melanie again. Congratulations on the potential for new songs.

U2 fans will want to check out U2 tribute band Beautiful Day, which plays Downtown Brew on Saturday, March 31, at 8 p.m. This is a 21-and-older, $5.50 show. They aren't U2, but they're the closest SLO Town is likely to get to the Irish powerhouse.

Fish Out of Water founder Kyle Moon recently wrote to tell me that his band, in its "never ending quest to pump the funk and increase the peace, will be holding [its] own version of a UFC (ultimate funk championships)" on Saturday, March 31, at the Frog and Peach. "With the belief that imagination truly is more powerful than knowledge, we [as in he and his cousin Brandon] have been producing and performing all-original material for over seven years. During this time [we] have played zero covers. Yes, zero, zilch, nada. You would think in seven years a Sting cover might creep its way into the set list or perhaps a Jack Johnson sing-along, but alas, just our Rophunk Raehop." Check out these musical pugilists. 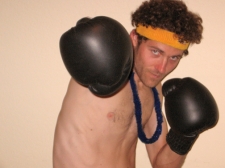 PHOTO COURTESY OF FISH OUT OF WATER

NANOWEIGHT Fish Out of Water co-frontman Brandon Moon is ready to rumble on March 31 when they play Frog and Peach.

Glen Starkey is in training to fight his base urges. Give him a pep talk at gstarkey@newtimesslo.com.