I was blown away upon first hearing Bela Fleck. I feel the same having experienced the music of two-time Juno Award winner Jayme Stone, who The Globe and Mail called “The Yo-Yo Ma of the banjo.” 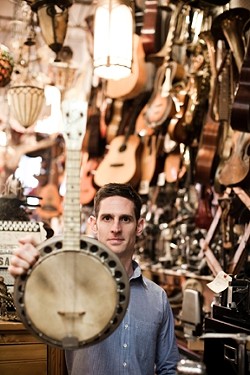 Stone’s Room of Wonders features Jayme Stone (banjo), Sandra Wong (nyckelharpa, fiddle), Andrew Small (bass), and Nick Fraser (drums), and if they sound anything like their new self-titled album, you will be amazed.

Inspired by everything from Japanese poetry to Brazilian literature and using instruments he found while traveling in remote Malian villages, Stone is a true innovator.

“The last chapter in Stone’s musical travelogue took place in Africa,” reads his bio. “The hide-covered instrument with an ‘extra’ drone string we call the banjo actually comes from West Africa. He became particularly curious about the music that may not have made it across the ocean on slave ships headed west from Senegal and Mali in the 1600s. The resulting album, Africa to Appalachia, is a boundary-crossing musical collaboration with singer and kora maestro Mansa Sissoko.”

SLO Town’s venerated nightclub kicks off the week with Jackie Greene on Thursday, March 1 (8 p.m.; 21-and-older; $16 presale or $18 at the door). The soulful, rootsy, bluesy singer is a real DIY story. He started sitting in with bar bands while still in high school, made his own recordings in his garage studio, burning and selling his CDs wherever he could, and was eventually discovered at an open mic show and signed to a small indie label. Greene was later signed to a major one, Verve Forecast, and he’s a member of former Grateful Dead member Phil Lesh’s band.

Dark, angsty, pop-punk act Alkaline Trio hits the club on Friday, March 2 (7 p.m.; all ages; $18.50 presale or $21 at the door). Formed 15 years ago, the trio has steadily made a name for themselves, yet struggled through label problems, which is why their most recent album, The Addiction, was released on their own label, Heart & Skull.

Spend an evening with Hapa on Sunday, March 4 (6:30 p.m.; 21-and-older; $23 presale or $25 at the door). The pan-Polynesia group describes its music as “an amalgam of influences ranging from ancient genealogical chants to the strummed ballads of Portuguese fisherman, Spanish cowboys, and the inspired melodies and harmonies of the traditional church choirs of the early missionaries.”

Deadheads rejoice. Former Grateful Dead percussionist Mickey Hart is coming to SLO Brew with his band on Tuesday, March 6 (7 p.m.; 21-and-older; $30 presale or $35 at the door). Hart, always a fan of exotic polyrhythmic sounds, has long been a proponent of world music. In fact, just four months ago, Smithsonian Folkways Recordings released the Mickey Hart Collection to, as his bio says, “preserve and further the Grateful Dead percussionist’s endeavor to cross borders and expand musical horizons.” Hart is donating 100 percent of the ticketing fees from tickets sold on MickeyHart.net to Music Therapy. The show will feature brand new material, as well as selections of his greatest hits and Grateful Dead songs.

Finally, on Wednesday, March 7, check out Howlin Rain (8 p.m.; all ages; $10) with opening act The Shrine. This Nor-Cal group formed in 2004 and has drawn comparisons to early Grateful Dead and caught the ear of über-producer Rick Rubin. 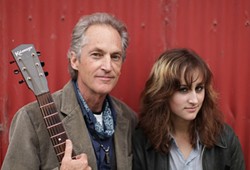 The late, great Townes Van Zandt will get the showcase treatment on Monday, March 5, at The Spot (7 p.m.; all ages; $10), when local performers celebrate what would have been his 68th birthday by covering his songs. Bob Rea from Durango, Colo., will cover “Pancho & Lefty,” and Ted Waterhouse & Buffy Doran will join forces on “If I Needed You.” You’ll also hear Amber Cross of the Old Time Fiddle & Banjo Show, Gary Foshee, Steve Kindel, Randall Lamb, and the Kern River troubadour known as Lost Hills. 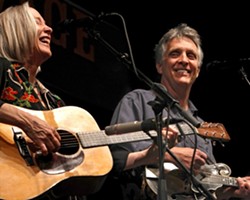 There are two good reasons to come to Los Osos’ Red Barn on Saturday, March 3. The first, of course, is to hear the amazing Laurie Lewis and the Right Hands. The second is to experience the Second Annual Red Barn Chili Cook-Off at 5 p.m. Just bring your finest chili to the potluck supper to throw your hat into the ring!

“To avoid the possibility of corruption, the names of the judges will not be revealed until show night,” said organizer Stuart Mason. “The prize is a Laurie Lewis CD and the pleasure of knocking last year’s winner Gordon Mullen off his chili-throne.”

Grammy-winning bluegrass artist Laurie Lewis has been making amazing music for 30 years, yet the soft-spoken, sweet-voiced fiddler couldn’t be more humble, despite her 1997 Grammy win for True Life Blues: The Songs of Bill Monroe, or the fact that she’s twice been named Female Vocalist of the Year by the IBMA (International Bluegrass Music Association), not to mention winning the California’s Women’s Fiddling championships … twice!

The potluck supper and potluck band starts at 5 p.m., and the show begins at 6. No tickets are required, but the suggested donation is $10 at the door, with all proceeds from the show going directly toward expenses and the artists. BYOB and a dish to share for the potluck supper. This show is made possible through the generous support of KCBX Public Radio and Live Oak Music Festival.

This week’s hardest rocking show happens Saturday, March 3, at the Pour House when local act Axia and L.A. up-and-comer MAL hit the club. MAL’s new self-titled release kicks off with “The Stand,” a grungy anthem worthy of Live or Soundgarden as lead singer Kristopher Jung intones, “I will never run away from anyone.” On “Medicine,” the band offers a cautionary tale of self-medication: “It only kills the truth. You’ve got a life, so let it go.” The thrashing “Krampus Nacht” offers head-bobbing, mosh-stomping fun, while “Gemini” slows things down and uncoils on the listener like a tone poem. Ripping guitar and clanging cymbals explode in the opening of “Numbrella” before Jung launches into another stadium-filling anthem with a page ripped out of the ’90s grunge playbook. “The Curse” shimmers along with tremulous guitar work that abruptly turns into wall-of-sound rock roiling under Jung’s soulful voice, and then the album ends all too quickly with “Vimana,” a whisper-to-a-scream rocker. This is good stuff!

There’s big buzz about Rags & Ribbons, playing Saturday, March 3, at Frog and Peach. “They’ve sold out [in] Portland [and] Seattle and only have played three shows,” gushed Kaytea of XO Publicity. “This band is getting national attention and [is] about to showcase for some major labels. They are in route to SXSW. They are one of my favorite bands!”

Delaney Gibson with special guest Steve Key will play Sunday, March 4, at 7 p.m. in Bethel Lutheran Church Fellowship Hall (295 Old Country Road in Templeton) for a benefit concert for the North County Women’s Shelter & Resource Center. There’s a $10 suggested donation at the door, and 100 percent of the proceeds will benefit the Center. Gibson, a pianist and guitarist, has studied opera and, as a vocalist, has backed music legends such as Barbra Streisand, Andrea Bocelli, Barry Manilow, and David Foster in concert. Steve Key is an award-winning songwriter, performer and recording artist, best known as the writer of “33, 45, 78 (Record Time)” recorded by country music star Kathy Mattea. Seating is limited to 175, and refreshments will be available for purchase. For more info or to reserve spots, call Loretta Hartwell at 226-5400, Ext. 201.

Reno-based Americana folk act Buster Blue will roll into Frog and Peach on Wednesday, March 7, to promote its newest album, When the Silver’s Gone, which contains “horns, banjo, accordion, chains, and a well-placed bucket. “Last year we played nearly 180 shows all over the western United States, including appearances at the Capitol Hill Block Party in Seattle, the Strawberry Music Festival in Yosemite, and the Millpond Music Festival in Bishop,” said band member Andrew Martin. “Besides touring as much as possible in 2012, we’ll also be working on a new album. This will be our first time in San Luis Obispo, so we are excited to make this show the best it can possibly be.”

Finally, put the Young Jazz Artists Showcase on your calendar. It happens on Thursday, March 8, at Steynberg at 7:30 p.m.