Not your mom's healthy meals

Nourish is open Monday through Friday from 7 a.m. to 3 p.m. and Saturday and Sunday from 8 a.m. to 2 p.m. The restaurant is located at 1126 Morro St. next to Granada Hotel and Bistro, which offers small plates from 3 to 5 p.m. daily and dinner service from 5 to 10 p.m. Sunday through Thursday and from 5 to 11 a.m. on Saturdays and Sundays. New Nourish customers can get 20 percent off their first meal through the end of the year. Go to nourishslo.com for more information.

Merriam-Webster's definition of "nourish" is simple, but totally incomplete: To "nurture," or "promote the growth of." Kind of vague, no?

Of course, it is what we shine our attention on that will grow, and manifest, in our lives. With this definition in mind, you could either "nourish" good habits or bad. 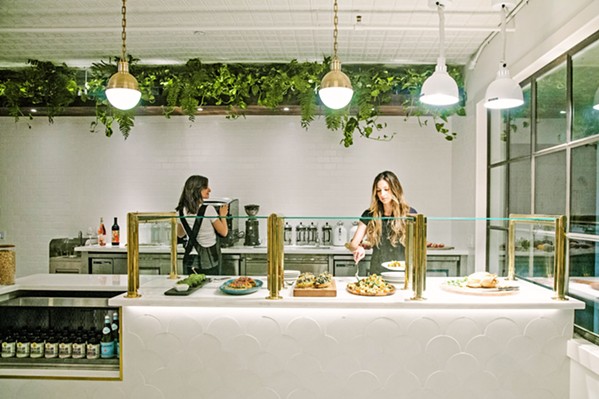 At the start of the New Year, we all have the best intentions for boosting our health and wellness. We promise ourselves so much, yet tend to execute so little.

What stands in the way of achieving these lifelong health goals? I'd argue it's a simple word: "flavor." Actually, I'd add "creativity" to the mix, too. How many kale salads—as great as that particular kale salad may be—can you eat before you say, "screw it," and dive head-first into a weeklong pizza bender (the dipping-each-bite-in-Ranch-dressing-kind)?

By now, we all know that working out is actually a smaller (yet important) percentage of cultivating a truly healthy lifestyle. Diet—the fuel we put into our bodies day in and day out—tends to help or hinder us most.

The folks at Nourish understand this. That's why this sleek grab-and-go eatery—located in downtown SLO just next door to Granada Hotel and Bistro—is always featuring something new and nourishing in its shiny deli case.

"We wanted to make the food fast and accessible. A lot of people want to eat healthy, and they want to do so every day, and they want healthy, delicious food you can get excited about, grab quickly, and go," Granada General Manager Eva Morales said.

Yes, you can easily get your order in and get on with your life. Want to chill longer? Snag a table either in the cozy dining room or head next door and sprawl out on Granada's swanky outdoor patio.

Plus, there's actually bread! Gluten-free and old-school varieties (with all the gluten) too.

A.m. meals include the requisite smoothies ("green," "immune," "blueberry coconut"), but breakfast might be as hefty as an egg sandwich with choice of gluten-free or Breaking Bread levain and local farm eggs, house-cured bacon, heirloom tomato, goat cheese, and spicy greens.

Oatmeal hounds (that's me!) must try an already cult fave: Maple quinoa granola, served with organic milk or almond milk, and topped with your preference of fruit, Straus yogurt, or chia pudding. 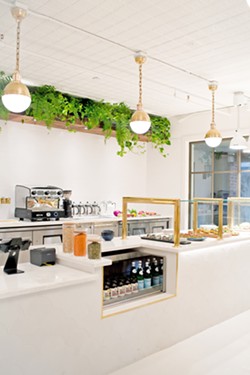 Morales said the idea for Nourish sprung from a re-tool of Granada's former lunch offerings. The restaurant found that although dinner and weekend brunch service was popular, a sit-down lunch just wasn't what most locals were looking for day to day.

"Monday through Friday, locals aren't necessarily looking for a long leisurely lunch. We feel the Nourish concept is more what people are looking for: Grab breakfast on your way to work. Have a breakfast meeting here before you head to work. Most people don't have an hour and a half to sit down and eat lunch. We want to fit into your schedule and serve the community," she added.

You might recognize Granada newcomer Chef Roxanne Lapuyade from her former restaurant, Roxanne's Cafe, which operated behind Smiling Dog Yoga in SLO for six years before closing about a year ago.

Her résumé also includes stints as the produce manager for SLO Natural Foods Co-op, an assistant pastry chef at Honeymoon Café in Pismo Beach, and sous chef at Thomas Hill Organics in Paso Robles, where she worked alongside Nourish's other culinary half, Chef Kenny Bigwood (he helms Granada's dinner service at the Bistro).

Sure, you can still get Roxanne's Cafe's famous "Ro-boats": Romain lettuce topped with citrus cashew spread, mango, avocado, cabbage, and carrots, but the rest of the menu is a collaboration between the two chefs.

In this way, it's about so much more than offering gluten-free, dairy-free, vegan, and paleo options. It's about offering up a diversity of food that you'd actually want to eat, again and again.

"We want to offer something for everyone, and we include meat, organic chicken, wild salmon—which can be added to a vegan salad," Lapuyade said. "We roast all our meats the day of and then use them to create seasonal soups, sandwiches. This food is satisfying, really a combination of flavors."

Partner-in-crime Bigwood brings his own flare, including a classic house habanero carrot hot sauce and a knack for "upping the ante" on umami, funk, and pickled flavors.

"I'm the health food person, I like the vegetables—they really get me going," Lapuyade said. "Kenny is all about using every single part of the ingredient and he loves making cured things and sauces. We really push and pull each other."

Try the broccoli salad, if it's still available (recipes change as quick as the seasons). This is a perfect example of how health consciousness, a respect for good quality produce, and fearless creativity can make us actually want to nourish those good habits on a regular basis.

"When developing the recipe, it was a back and forth. He'd say, 'Let's try pickled onions on it,' and I'd say, 'It already has sweetness on it, no.' Then, I'd try it his way, and Eva would try it, and we'd all agree,'" Lapuyade said.

Isn't this how all great artistic duos push the boundary of their art?

"I tried it and thought, 'Wow. That's a nice crunch,'" the chef said with a laugh. "Now, people want to eat it every day." Δ

Hayley Thomas Cain has been on a weeklong pizza bender. She can be reached at hthoms@newtimesslo.com.