Move through it: Silvia Suarez takes over Holistic Movement Center in Morro Bay

The number 108 is sacred in yoga. It’s considered the number that demonstrates the wholeness of existence. Yogis all around the world can be found doing 108 sun salutations or moving their fingers across 108 mala beads as they meditate.

It’s a big number when doing 108 chaturangas or yoga push-ups that the sun salutations call for; it’s a much smaller number when paying $108 for an established yoga studio that’s up and running.

When Valentina Petrova, owner of yoga studio the Holistic Movement Center in Morro Bay decided to make a career change, she wanted to make sure the right person took over the community she had built, so in April she opened up a nationwide contest, asking participants for only $108 and an essay on why they should have the studio.

Silvia Suarez of Los Osos had been practicing yoga for years, and although she had a background in movement arts therapy and dance, she had never taught yoga. 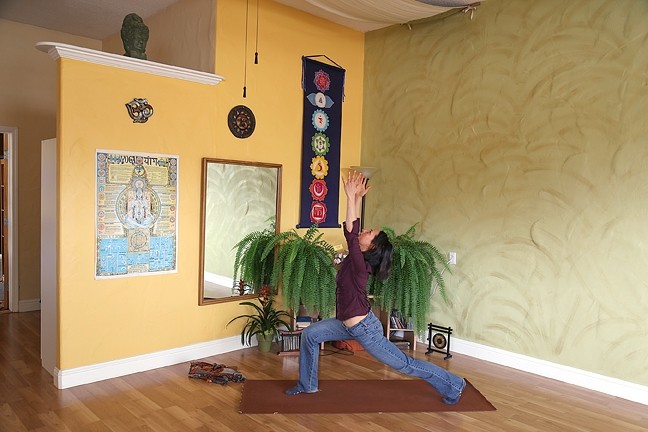 “It didn’t even cross my mind at all initially to participate,” Suarez said. “I applied the last day. My husband kept motivating me to do it. And I was like, ‘I’m not even a yoga teacher.’”

More than a hundred applicants were whittled down to 10. A winner was selected. It wasn’t Suarez. But then that person backed out. And so did the two winners who followed after that. Suarez, who had been in Petrova’s top 10, was finally asked in September if she was still interested in taking over the studio.

“I felt very relaxed,” she said. “I felt like yeah, it makes sense. I was totally not disappointed when I heard that I didn’t get it at first because something in me knew I was going to be in the right place at the right time.”

“It’s been pretty busy, but it’s very natural at the same time,” Suarez said. “Even though I hadn’t had yoga teacher training, I’m very familiar with yoga so it’s not like starting something totally new.”

While the certification is new, working with the body to find balance isn’t. For years Suarez, who is originally from Colombia, worked as a psychologist with a holistic approach to help battered women, displaced people, and students through movement.

“It’s really seeing yourself and developing emotions and strengths in certain life situations through movement and through creating art,” she said. “The body has so much knowledge, when you listen to it.”

Suarez wants to continue to offer yoga classes and workshops with an increased emphasis on community and healing.

“Something that is constantly in my mind is veterans or women or different segments of the population that suffer from post traumatic stress disorder that could benefit from yoga and breathing and movement,” she said. “I just can’t see yoga not being for absolutely everybody. It’s an amazing tool that I have already seen work again and again.”

Ryah Cooley is down, dog at rcooley@newtimesslo.com.