When New Times tagged along with some 200 officers from various local and federal agencies comprising the Central Coast Safe Streets Task Force for a large-scale drug bust at the tail end of 2012, the FBI agents running the show were tight lipped. All media knew was that arrest warrants were served at several locations in a highly coordinated effort and that 15 people were taken into custody for suspected drug trafficking. 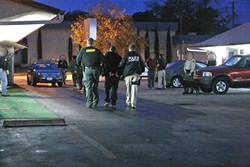 At the time, agents said the investigation began in 2011 and the suspects were believed to be members of a drug ring associated with street gangs, including Paso 13, Mexican Pride, Underground Pride, and the Wicked Minded Sureños. Along with the suspects, the sweep netted one loaded weapon and illicit money and drugs with an estimated street value of $100,000.

Four months later, a clearer picture of the alleged drug ring’s operations (and how officers tracked them) is beginning to emerge.

Suspect Melanie Wilson, who remained at large after the initial bust, was arrested the following day. She and seven of the other suspects have since entered guilty pleas with a federal court in Los Angeles to charges related to selling methamphetamine. None has been sentenced, but they each face more than 10 years in prison.

Seven more defendants are currently awaiting trial, and one case has been dismissed.

Court records reveal allegations that Angelica Aguilar attempted to play the role of middleman in the purchase of a pound of methamphetamine. A confidential informant approached her in December 2011 to set up the transaction, and she reportedly called Miguel Hernandez, an alleged supplier who could deliver the drugs from Bakersfield. Aguilar and the informant waited in a Holiday Inn Express Hotel in Paso Robles for several hours, but the meth never arrived. Aguilar called Hernandez several times to get updates on his progress, according to the documents, and each time Hernandez claimed to be en route. He repeatedly asked for verification that the buyer would have the money, because he didn’t want to make the trip for nothing, especially considering the amount of drugs he’d be carrying, records state. Aguilar reportedly told him the buyer had a stack of cash six inches high, but Hernandez eventually called to say he couldn’t get a pound. The deal would have to wait.

Santa Barbara County Deputy Sheriff Steven Gonzales, who filed the affidavit on Aguilar, wrote that his confidential source was paid for his/her cooperation and had an extensive criminal history—assaults, theft, narcotic sales, driving intoxicated, fleeing from police, and illegal possession of a firearm. Though the informant was believed to be reliable at the onset of the investigation, he/she reportedly lied to officers and was arrested in 2012 for distribution of a controlled substance.

Aguilar’s case was dismissed shortly after her arrest. Hernandez, who was also arrested in the sting, was reportedly involved in another transaction with an informant, for a much smaller amount (46.1 grams). This time, Hernandez came through, according to court records. He entered a guilty plea on March 14.

None of the suspects arrested in the December sting had been observed selling more than an ounce or two of meth. Court records describe eight separate methamphetamine transactions involving the suspects and one or more confidential informants. The deals involved mid-level quantities, ranging in weight from 13 to 77 grams and costing $500 to $2,550. Over the course of a year and a half, agents working these cases reported observing the exchange of $9,700 for 327.7 grams of methamphetamine, less than a pound in all.

To orchestrate the deals, the suspects allegedly operated in groups of two, one to serve as the contact point for buyers and another to supply the drugs. Sometimes a third party stepped in to deliver the product or negotiate the price.

Among the 15 suspects, only two participated in more than one completed or attempted transaction as reported by investigators. A spokesperson for the United States Attorney’s Office said the only direct links among the suspects were geography and the fact that willing informants could use them to buy drugs.

Elisa Becerra, who said her brother was arrested in the raid, criticized the operation for targeting middlemen and addicts, easy targets who couldn’t afford to defend themselves in court. She said she knew many of the suspects and claimed that most were simple tweekers who sometimes connected people with their suppliers so they could get a cut of the deal and finance their next fix. She said her brother was tattooed from head to toe—marks gained early in his life in relation to his associations at the time—but added that he’d turned his life around in the last year, ever since his son was born.

“He made a wrong choice, but I know he wasn’t the person he was as a kid,” Becerra said. “He had changed; too late, I guess.”

According to court documents, an informant wearing a personal recording device met her brother, Juan Becerra, in a Food 4 Less parking lot in August 2011 to buy drugs. The two reportedly drove in the informant’s vehicle to Paso’s Barney Schwartz Park, a children’s play area, where they counted out and exchanged $1,050. Suddenly, a late model pickup truck drove past, and Becerra reportedly told the informant to follow it to a gated property on the north side of Union Road, where on the previous night, the informant had seen men with guns hovering over large shards of glassy methamphetamine.

Those men were never named in the reports and don’t appear to have been arrested. While the informant waited, Becerra allegedly went inside and returned with an ounce of drugs.

Becerra has entered a plea of not guilty and is scheduled to go on trial May 28.

The Central Coast Safe Streets Task Force said its operation began with the September 2011 arrests of three suspects accused of peddling larger amounts of meth in Paso Robles. After using an informant to buy several smaller chunks (usually in the Wal–Mart parking lot), police pounced on a two-pound transaction—but two men, including the supplier who allegedly smuggled the drugs from Mexico, got away.

* Editor's note: This article was altered on May 10, 2013 to delete an error concerning a suspect whose case file could not be located by New Times or the U.S. Attorney's Office prior to publication. A clerical error made it appear that Leobardo Aburto Ortega was not facing charges, but he did in fact enter a guilty plea on March 21 to a charge of conspiracy to distribute a controlled substance.