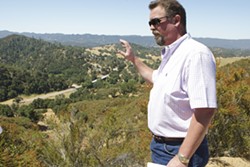 From the top of a steep chaparral-covered mountain a couple of miles outside Santa Margarita, eye-level with a soaring vulture, you can see a procession of blue-green ridges stretching into the distance, scattered well-kept houses in the hills and valleys below, cars scurrying past along Highway 58.

It’s a mountain made of granite, like the ones just to the north that are slowly, relentlessly, being scraped down and trucked away from the Hanson quarry near Garden Farms.

This mountain, too, would be gradually removed and sold, under a proposal for a new quarry along Highway 58 two miles east of Santa Margarita. Worried about the impacts to their quality of life, local residents are making sure their voices are heard early in the planning process.

Las Pilitas Resources LLC and Oster Living Trust are applying for county permission to mine 500,000 tons a year of granite and decomposed granite, and to set up a recycling facility for asphalt and concrete debris trucked in from construction sites. The quarry would generate around 200 truck trips each day to and from the site; additional truck trips from the asphalt and concrete recycling operation haven’t been quantified yet.

“I spent a lot of time designing the quarry to have the least impact on the neighbors,” said the applicants’ agent, Ken Johnston, as he showed a visitor around the site. Retaining a lower hill near the highway would minimize noise and visual impacts, he said. The crushing facility would be “tucked in around a corner” to reduce noise, he added.

Around 30 to 40 feet of decomposed granite lies on top of the solid granite, and all that material would be excavated and trucked away over the next 30 years to make roads and other construction projects.

Johnston said he wants
to work with Santa Margarita residents on ways to mitigate the truck traffic “that will work well for everybody.” He said modern blasting techniques and up-to-date equipment would also help reduce the impacts.

Residents turned out in force at a public meeting earlier this month to tell county planners about their concerns and to suggest issues to be addressed in an environmental impact report. A grassroots effort is under way to make sure more neighbors know about the proposed quarry so they can comment before the Aug. 3 deadline.

“Attention all area residents,” states a sign posted in front of the Santa Margarita post office and at Highway 58 turnouts. “Your lifestyle, your health, your property values, your water source, and your safety are at risk.”

The sandwich boards also include copies of the county’s comment form for residents to fill out and send in.

“My main concern is that the road is   not safe for that kind of truck traffic,” Parkhill Road resident Eric Booker said in an interview. Bicyclists, motorcyclists, commuters, and children walking to school in Santa Margarita would all be impacted, he said.

The quarry’s use of water is also an issue for neighbors, according to Booker. Although the latest proposal eliminates washing the granite, water would still be needed for dust control and to irrigate plantings as the excavated areas are reclaimed.

“Water is very scarce here. A lot of people have to haul water in dry years,” Booker said.

Don Baxter, who owns land across the road from the proposed quarry, is also worried.

“They are affecting too many people. I’ve watched the whole area go from being not so desirable to now, when so many people love the land and are making it better,” Baxter said.

For nearby neighbor Charlie Kleemann, his home would “no longer be suitable as a residence” if the quarry is approved. “When you’ve put a lot of love in your place, when you’ve made it with sweat and blood, when you’ve built yourself a little paradise, I'm having a hard-time coming to terms with being uprooted,” Kleemann said.

The applicant hired consultants to prepare a series of studies on the project, producing a stack of reports a foot thick, according to John Nall, environmental coordinator with the county planning department. Those studies will be peer reviewed by the team preparing the environmental impact report, Nall said, to avoid any perception of bias. The applicants’ representative Johnston said he asked the consultants “to be unbiased” in their studies.

Residents’ concerns will be addressed in the draft environmental report, due for completion in about six months, Nall said. More public comment will be accepted at that time, for incorporation into a final environmental impact report.

The applicants are planning to invite neighbors to a meeting at the Santa Margarita Community Hall on Sept. 16 at 6:30 p.m. to talk about the project, Johnston said.

For now, though, a neighborhood group just wants to make sure that people tell county planners their concerns before the Aug. 3 deadline.

“Your input can make a difference in your future quality of life,” their flyer states.