Moving time: The Templeton Livestock Market will close in October, leaving local cattle ranchers wondering if they'll be left in the dust

Behind the big red building that houses the Templeton Livestock Market, a much bigger yard lined with metal pipes and wooden boards holds hundreds, if not thousands, of head of cattle most Saturdays. The smell is strong, and the mooing plentiful.

A few women on horseback ride up and down and around the partitioned rows, driving the cattle through the arenas, keeping everything running smoothly from the back end. 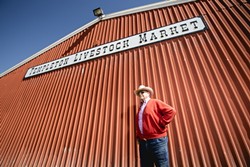 Young men operate the gates inside. One rides as the gate swings back and forth, hopping off and back over the fence railing. In the small ring inside, the cattle pace back and forth.

The auctioneer goes to work, commencing the familiar rapid rhythmic oration, words bouncing around as bids are placed. If there’s silence from potential buyers, he’ll pause to highlight the cattle’s attributes—maybe it’s the cow’s frame, showing the potential for putting on weight; maybe he’ll mention the breed or the name of the rancher, drawing on a well-regarded reputation.

It’s all done so efficiently. And the market is treasured by the local industry.

“A livestock market is a country bank,” said Dick Nock, a former owner of the market who currently wears many hats as a rancher, cattle dealer, and ranch real estate agent operating out of an office on the property. “You bring your cow in here, you sell it, you go to the office, you get a check, and you go down the road.”

On Saturday, Oct. 4, this will all happen for the last time in Templeton, as the market will hold its regular sale, as well as its annual bull sale, before shutting its doors to make way for 107 single-family homes.

Central Coast Builders recently acquired the 17-acre property, including the project’s approval that the previous owners received from the county seven years ago, according to the company.

Plans are in swing now, and the market has until Oct. 15 to vacate; the other tenants, including Nock and the North County favorite Hoover’s Beef Palace, have until Nov. 15.

In the last year, the market’s been a busy place as producers have dramatically culled their herds during the worst drought on record in California. While it’s been a tough few years, their ability to sell livestock here—and the high market prices for beef—has been a bit of a godsend. After 70 years of operation, the market, which has been the only place of its kind within 200 miles, will be missed. 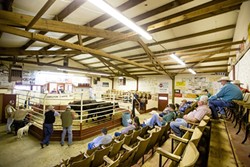 The market was established in 1947 by two ranchers who ran cattle in the area along highways 41 and 46 east. The market was a place where producers could sell directly to buyers without having to spend precious time and resources delivering them elsewhere. Before that, ranchers often had to transport their cattle to packing houses along Vernon Avenue in Los Angeles.

The market changed hands a few times. In 1966, Nock bought a one-third share. After buying out his partners in 1970, he was the sole owner for a few years, during which he built the current pole barn structure that’s home to the auction and the building that houses the market’s office, his office, and the restaurant. He then took in a few partners, and eventually, Nock—who was very immersed on other ventures, including running a meat company, managing two of the area’s largest ranches (the Chimineas Ranch and the Santa Margarita Ranch), and running cattle on a few thousand acres he owned along the coast—sold his share.

Nock knew that the new owners—part of a prominent Templeton family—had an interest in developing the property, but he sold anyway.

But while Nock laments the ripple effects that will be felt throughout the local industry, he has no hard feelings about what the new owners decided to do with the property.

“You can’t sell something to somebody and tell them what they’re going to do with it,” he reasoned.

The plans to develop the property have been in the works for some time. Not long ago, 110 homes were built on a parcel behind the market, and it was only a matter of time before houses filled in the remainder of the space.

Not all is lost, however, as the market will set up a receiving yard near its Ramada Drive location that will still operate under the same name and receive livestock on the weekends, Tuesdays, and by appointment. From there, the animals will be taken to the Visalia Livestock Market’s Wednesday auction, said Beth Baxley, who runs both markets with her husband, Randy.

Baxley said that without control over the property, that’s about all they can do.

“It’s important for us to have a place where people can bring them,” said Baxley, who also expressed no hard feelings with the owners.

For those involved, it’s another show of how the times are changing. Nock worries that even with the receiving yard, the market’s closure is going to create one more challenge for ranchers in an era when drought, land prices, regulations, and market conditions make the business a difficult one to keep afloat. Small-time operators will have the most trouble, Nock said, because the auction is an ideal place to sell off small quantities of cattle.

“The loss of this facility is really hurting the little guy that doesn’t have the capability of making a load of cattle,” Nock said. “He’s got 20 or 30—what’s he gonna do with them?”

“For those that have smaller numbers or would rather be at the live auction, not having an auction will be a bit of a hardship. That’s why we’re putting in the receiving yard,” Baxley said. “We’re determined and dedicated to provide that service.”

That the times are changing is a very familiar concept among ranchers, and this change is another straw on their backs.

“It will have a huge impact on the cattle industry in SLO County, especially the smaller operators as well as the small animal sale that is held the first Sunday of each month, not to mention the part-time jobs that so many young people who work there every Saturday [hold],” said Jo Ann Arnold Switzer, board member of the SLO County Cattlewomen’s Association. “However, change in today’s world is inevitable, and the Baxleys will continue to take good care of their customers by providing service of a holding station just down the road.”

People in the local cattle business are a resilient bunch. Nock, in his 80s and still working, is looking into establishing a market somewhere else in the area, even though he considers it likely to be an “exercise in futility.”